Fighting in the streets 1815 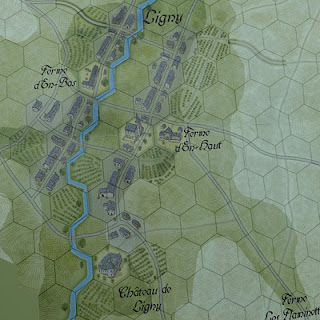 'The Streets of Ligny' is one of the mini scenarios provided in Hexasim's Ligny module from the Eagles of France series.

I have just two boardgames in my collection that take their 'field of battle' type system and apply it to a single built up area setting, where troops fight over gardens, amongst buildings and in the streets and these street plan type maps fascinate me.

The first is The Men of Iron series (GMT) that offers 1st and 2nd St. Albans from Wars of the Roses and the other is this, a system that has covered the whole of Waterloo, Austerlitz, Ligny and Quatre Bras, but here puts a focus on a single village.

This post gives a brief look at my most recent replay. Please use the 'read more' tab for the rest of this post.

Here we have just a four turn, very playable scenario. Turns are hourly, but within each turn, each side goes twice, so in effect we will get eight half hourly activations.

The overall situation is that a small part of Prussian II Corps under von Pirch is holding Ligny. More men are heading towards the village (see below photo) and are perhaps an hour away from useful deployment. Further back (off map), more reinforcements are heading towards Ligny, but they are at least two hours away.

The French IV Corps under Gérard are ready to attack the village. They have four main building complexes that they should aim to capture. Victory will be determined by the capture of those building hexes plus the number of casualties suffered.

The French player is aware that speed is of the essence before the Prussians become too strong to be ejected from the village.

This time I try a different tactic for the French - deploying the cavalry to the right flank to quickly gain the top end of Ligny. In the past I have put them on the left, where they have been useful in pushing around the Prussian right flank, which rests on the Chateau.

3 PM. The French advance close to the village but halt to allow their guns to prepare the way .... except on the right, where we are looking for a more dynamic advance. 76th and 59th Line strike the buildings and eject the Prussians, who rout back across the stream. The cavalry move up and the French now control the top end of Ligny, a good start.

The Prussians counter-attack and get back across the stream, controlling the bridge and preventing further French envelopment. 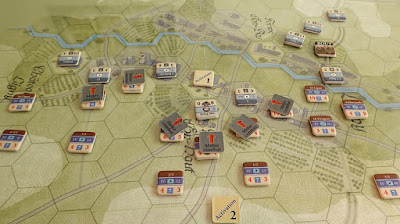 This is an important attack because the Ferme d'En haut is an objective, as is the church immediately behind. 4th West Landwehr make a valiant stand (exceptionally good Quality Check dice roll) and hold. Over to Gérard's left, 111th line and 9th light make an ill-advised assault on guns located in the building line ..... their attack is halted and they rout back!

4 PM Gérard has a real dilemma. He has three units routing from the field and he has the Prussians under pressure. He knows he needs those routing units back in the fight, but if he turns his attention to rally, his remaining forces can't attack and are limited in movement and that will allow the Prussians a chance to recover.

The breath is held, still not convinced that this is the best option and the rally dice are rolled, each of the three units pass and will start to make their way back to the village - phew!

As suspected, the Prussians strengthen their grip on the village. Worse! two more French units break and rout in front of Prussian guns (will they ever learn!), Gérard’s delay may not have been worth it.

Both sides are suffering heavy casualties, but the French do take d'En haut and then 3rd West Landwehr immediately re-take it!

5 PM Prussian reinforcements come into view. There are an unusually high number of 2's and 3's being rolled (on 2D6), resulting in murderous casualties and the French force is being ground down.

The French launch another assault in the centre and rout 3rd West Landwehr from d'En haut, who as they flee, take 4th West Landwehr with them. 4th WL had been defending the church behind d'En haut - the way is now open and despite losses, the French cannot afford to not advance.

As it turns out, this is the high point for the French as their left is in full rout and their right is checked. Prussian reinforcements are about to cross the stream and join the fray.

6 PM French 30th Line at the church, who are entangled with the enemy and can't disengage, become a reluctant rearguard as the rest of the Gérard’s Corps escapes. Within half an hour, they are overwhelmed and Ligny is once again fully in Prussian hands.

The game ends with an obvious Prussian victory. Losses have been heavy, particularly for the French, but those low dice rolls were very prevalent in this hard fought game and in the end, the French simply ran out of steam and options.

As always, an excellent couple of hours at the table with this game system.

A previous post on this scenario, explaining some of the game processes LINK

A previous post covering the mini scenario at Hougomont LINK