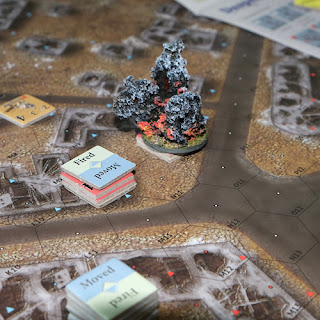 As I work through the Stalingrad module in the Old School Tactical series, we have come to The Nail Factory scenario.

‘Units of 42nd Guards Rifle Regiment and armed factory workers will fight for every building’ It is 21st September 1942.

The following is a very brief outline of battle. Please use the ‘read more’ tab for the rest of the post.

The Soviet forces begin set up in a complex of buildings and prepare for an attack launched from two directions. The Guard units (red counters) count as Elite, the factory workers are represented by Irregular squads and they are disadvantage in several respects.

The Germans have a rifle element, supported by assault troops, with well armed pioneers arriving later as reinforcements. They also start play with a section of two StuG III B’s and a section of two Pz III H. 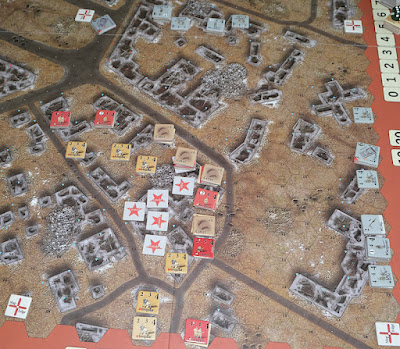 You can see from the above photo that the Soviets hold a core group of buildings that have 7 objective hexes (two are covered by defending units). To the right and upper edges of the picture are the starting German forces.

The dark brown counters are additional cover markers, which give the defenders an additional +1 on top of the +2 for stone buildings.

Take note of the upper left part of the map. You are looking at two red counters representing Guard units and then up by that white counter with a red cross are two German StuGs.

At start, the Soviet forces get a 45mm Anti-Tank gun that can be set up hidden. Since I am playing solo, that loses some utility, so I listed three hexes (N9, H7 and H5) that I though would prove potential useful locations for it. The idea being that when I wanted (needed) the anti-tank gun to ‘appear’, I would roll a D3 and that would give me the gun’s location ….. for good or for bad!

Right from the very outset, the game gave the excitement and tension that is a hallmark of the game. The first fire of the game came from one of the StuGs, firing at one of the Guard units in the buildings up the road ahead. It is in any case quite a capable weapon ….. but when you roll double sixes! The results against infantry are devastating and the whole guards section is removed - not even just half casualties, the whole lot went.

With now just one Guards Rifle section covering that wing, the potential danger of the StuGs was clearly evident …. Time to hope that the anti-tank gun was in the right place at the right time. The die was rolled and the gun did indeed get placed in N9 - with a view straight down the road at the StuGs!

They tested ‘to hit’ at 300 yards and did hit the leading StuG with an ‘ambush’ shot. Testing the effect of the hit, they just inflicted a ‘Shaken Test’, which the StuG passed.

The StuG returned fire with an H.E. shell, causing casualties on the gun crew. This is certainly looking like an unequal contest, the StuG armour is quite effective against the 45mm, while the anti-tank gun is not at all keen on all that H.E. coming in!

The 45mm fired again and got a damage result. A test showed the StuG’s gun barrel was damaged (permanent). Since the StuG doesn’t have MG capability, it was now pretty much useless, so that damage result was as good as any Knock Out would have been. 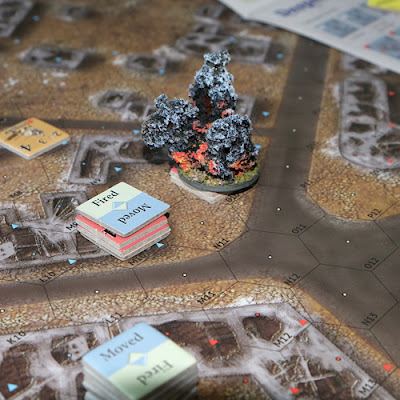 Above - German artillery falls amongst Soviet positions, causing casualties. Note the smoke marker is not part of the boardgame components.

Mid Game. There were some interesting interactions between the Germans having to lay down fire and cross open ground to assault while the differences between the good quality guards and poorer factory workers added into that mix.

The Germans were well armed with grenade bundles, satchel charges and the reinforcing pioneers brought in a flamethrower.

Ania, a Soviet Sniper, spent time targeting the German officers. The important thing about leaders in this game is that they allow a stack of two units to combine their firepowers, which gives very effective fire, so leader loss will impact on assault capability.

End Game. Once the Germans managed to get a foothold amongst the factory buildings, their troops quality and explosives etc started to clear the defences and the sniper was flushed out.

In the last turn, both sides were still holding the various victory objectives.

Victory is assessed by the value of the objectives held, plus a value that relates to casualties. With control of the Nail Factory somewhat stalemated, the final points were 14.5 to the Germans, but 16 points to the Soviets, so it was a narrow Soviet victory.

That pretty much accords with how the board looks, with the Nail Factory occupied by both sides.

Conclusions. At the start of play, each side draws a single Luck Card. The Soviets got ‘Artillery Strike’. Having disabled one StuG with their 45mm, they played the Artillery Strike card and got accurate fire on the other one, knocking it out.

The combination of the 45mm anti-tank gun appearing at the right place and the ‘luck’ of the artillery card, pretty much dealt with the StuG threat. The two Panzer III’s with their smaller HE shell didn’t pose as big a threat to defenders in the buildings as the StuGs had and they played a less significant role in play.

This early turn of events could quite easily have not happened and perhaps it was the loss of the StuGs that was the single moment in the game that cost the Germans the most in this scenario. On another day …. Who knows!

On the third turn, the Soviets get support from a rocket battery …. something I forgot, so in some respects, that countered the luck card in terms of advantages, though I would likely have worried about using rockets, in case they failed accuracy and fell on friendly positions!

Anyway, another good run-out with this system.

Another system AAR, located near to Remagen 1945 from the Phantom Division module. LINK

My sister webspace COMMANDERS is being re-configured to showcase various figure and boardgame systems that I am enjoying and give a flavour of where current ongoing projects are up to. Latest post covers the start of my 1809 project. Link.