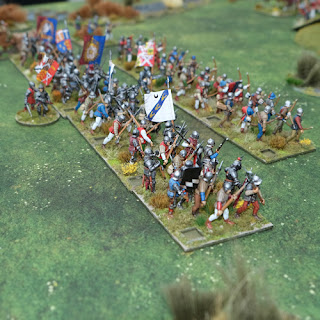 It was on a long, dark November evening at Piggy Longton’s Tavern, that a travelling trader, much the worse for drink, began complaining how he had been mistreated by Lord Trebian’s soldiers the previous day at the market in neighbouring West Rottingham.

James Ackley the wily Landlord saw the potential in the conversation and kept the man’s glass topped up. As the hours passed, the trader’s eyes became more glazed and his tongue looser. It transpired that a large body of yorkist soldiery had assembled behind West Rottingham’s Market Square for inspection by Lord Trebian. The point of interest being that the armourer was with them, together with carts of provisions and one filled with bundled arrows.

Ackley was certain that Lord Darcy, owner of the Piggy Longton estates, would reward him handsomely for his diligence and loyalty in getting this information.

Please use the ‘read more’ tab for the continued tale of Yorkist shenanigans.

Lord Darcy of Lancastrian persuasion did indeed show his favour to the hostelry. He, as had the landlord had done, instantly recognised the hallmarks of preparation for a raid and suspected that the Festival of Osric’s Chapel the following Sunday was the moment that his adversarial neighbour would choose to strike.

It is a day of celebration and thanksgiving, with of course a copious supply of Smoggy Ale, so that by noon most of the men would be unfit for combat.

Lord Darcy would have to prepare a surprise reception committee, but the usual business of preparing for the festival would have to go ahead, to create a deception for Trebian’s spies that no doubt were loitering in Piggy Longton.

The rains had been particularly heavy during the past weeks, the Smoggy Brook was significantly swollen and the banks to both sides extensively boggy. Lord Trebian would almost certainly avoid his usual route of attack across the brook, instead taking the circuitous approaches from the south, via Beacan Farm seemed much more likely.

Lord Darcy would put a contingent at the bridge over the Smoggy as a precaution, but his main force would be drawn across Crown Hill, barring the way to Piggy Longton from the south. His right flank protected by boggy ground and his left by Phelan Wood. Lord Trebian would doubtless be forced into an embarrassing retreat or at worse, a disadvantaged frontal assault on a narrow front. 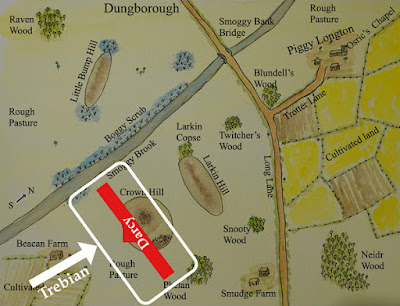 Lord Darcy seemed rather pleased with himself. His men less so - denied their overfilled tankards of Smoggy Ale from the cancelled celebrations, but they were hopeful that victory would bring them some hard partying later at their Lordship’s pleasure! 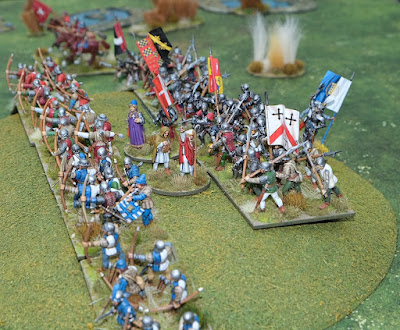 By mid morning on the Sunday, the Lancastrian force had gathered at the hill and the Bishop of Dungborough (above photo), attended by Friar Evian, was inspiring the men by way of strong sermonising and blessing. We will remember the Bishop from the previous Chronicles account as being Stephen the Fearless. The men were now ready for anything.

They did not have much longer to wait as a determined line of enemy archers came into view and closed upon them. Trumpets sounded as arrow shafts left the lines of both sides. There was no turning back - there would be a battle today! 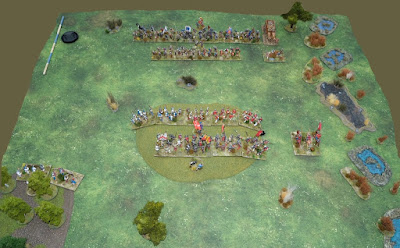 The armies were fairly evenly matched. Lord Darcy had more archers and had deployed handgunners and crossbowmen in Phelan Woods and put light cavalry to his right.

Lord Trebian had brought a larger body of heavy foot, as he had expected the fighting to start with an assault directly on the Piggy Longton hamlet.

Though surprised to find his path barred, Trebian took the initiative and immediately brought billmen out from either side of his rear ranks and had them join his archers flanks, broadening his front.

This forced Darcy to dislocated his own billmen on the left, bringing Sir John Flory awkwardly off the hill to cover the gap with the woods. His Men-at-Arms also moved from the centre towards the left.

Flory crashed into the advancing Yorkist bill under Sir Robert Baynton and initially came off the worst.

To try and gain the initiative, Lord Darcy sent his light cavalry out on the Lancastrian right. They clashed with Yorkist handgunners, who were easily pushed aside, but the horsemen were then halted and roughly handled by a force of billmen. 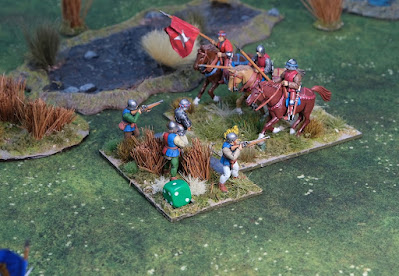 Trebian was slow to get his own centre moving forwards, mainly due to the volume of archery from the Lancastrians on Crown Hill, but his two flanks were pressing forwards and taking ground.

Casualties to both sides were pretty equal, so they both hit the Army Morale test point at the same time (one third losses). Each unit has to test against their discipline and a fail will add one hit to the unit. Quite a few units failed, none left the battlefield, but some were now becoming increasingly brittle.

In the growing melee scrum (above) that was developing on the Yorkist left, Darcy's Men-at-Arms suddenly broke and fled, he feared that his force would have to retreat to the hamlet.

However, on the right, his light cavalry managed to cut through and break into the Yorkist rear. This had become a battle that really could go either way. Both commanders simply had to hold their nerve.

Just as Trebian's Men-at-Arms and supporting Bill started to attack up the forward slopes on Crown Hill, his right (Baynton / Stanley) spectacularly collapsed. With enemy cavalry roaming to his rear, Trebian had no choice but to retire his shattered forces back to Beacan Farm and return to West Rottingham.

Lord Darcy had prevailed, though it was close and the cost heavy to both sides. His tired and weary men withdrew back towards the hamlet and the well stocked tavern!

That really was tight and could have gone either way. The system generates a slow deterioration of force, so that by the time a unit or two starts to fall, others are not far away from the point of rout and things can quickly escalate to a result.

This creates both opportunity and disappointment once you get past that 1/3 losses check.

Important moments in the game were;

Trebian taking the initiative and pushing his bill forwards on the flanks while the archery duel was still in full swing.

Darcy having to respond by dislocating his billmen and men-at-Arms.

The delay in Trebian getting his Men-at-Arms moving and when he initially charged up the hill against Lancastrian archers .... they held!

The initial advantage in Lancastrian archer numbers and the subsequent losses suffered by the Yorkist archers.

The Lancastrians had some militia archers on their right and they fled fairly early on, leaving that flank more exposed to the risk of assault, which Trebian later took full advantage of.

The collapse in quick succession of yorkist Baynton and Stanley, both of whom had taken additional losses during the Army Morale Check.

Again, the Sword & Spear rules delivered a good game, with the drawing of dice to activate units being a useful tool for solo play and bringing a touch of chaos to proceedings.

The history of Piggy Longton - LINK