1st Monthly update of the pinboard project.
This is the first update on how this project is going. For those new to the project, you may want to read the original post first, so that the following can be seen in context.
Link to original post INTRODUCTION 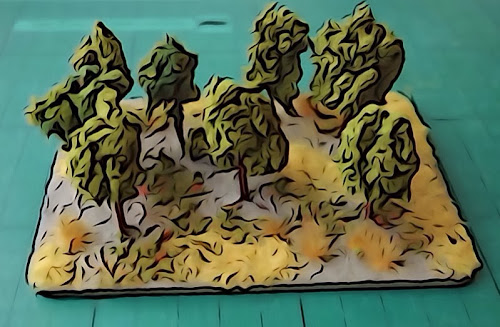 Since the pinboard itself is somewhat central to the project, I shall start with that. I had bought the MDF version of the board with the intention of coating it with a mix of sand, filler and paint and then doing some dry brushing when dry. This would (possibly) have looked nice but would cause some minor problem for small terrain items to sit on it nicely (I am thinking of roads and streams here).
To read the full post, please click below.

Anyway, while in Hobby Craft (UK), I came across the 'Ready Grass Vinyl Mat' from Woodland Scenics in 'spring grass' colours. This has a tight coating, unlike the grassy stuff on paper backing that is commonly found in model shops. It was £13, but I thought that it might actually work out more cost / time effective compared to doing the filler / sand thing. 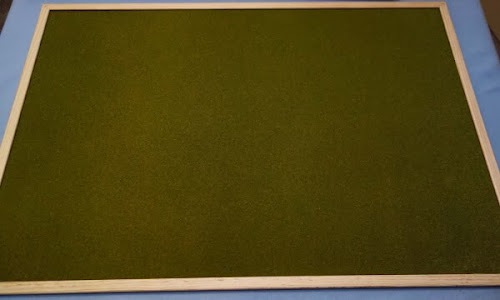 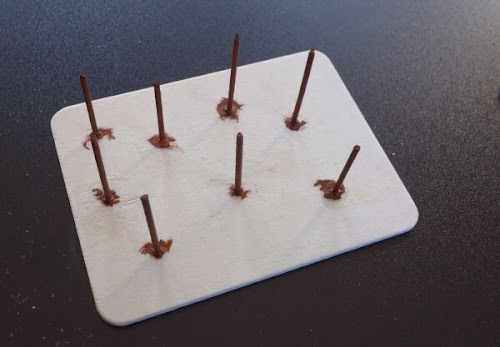 Paint the tree trunks a basic brown colour. Next, mix some filler with some dark cheap paint (for tinting the white filler and keeping the mix loose) and then sprinkle in a small amount of old rough flock or even fine sawdust, to add a bit of texture. Apply the paste to the base thinly to prevent warp and ensure the paste has lots of form, not spread flat like icing on a cake. Leave to dry. Lightly dry brush the textured ground with a light colour.
Put a good glue (I use UHU general glue) on the top half of the tree sticks and let it go tacky. Apply the clump foliage as a wrap, adding extra glue and clump if needed (you will, this can be frustrating to get it all to stick properly) and leave for the glue to properly harden. Dress the base as you see fit. I used clump turfs, scatter and grass, using PVA for the bond. Do it in an irregular patch-work fashion to break the base shape up.
Finally, spray (or use a loaded brush to dribble it on) on some diluted PVA to lock down all the foliage and flocks or use a spray fixative (artist shops sell it to 'fix' charcoal). I did both, glue and then fixative when dry. Some people use hair spray as a fixative, but I'm really not sure whether those chemicals could cause any future problem with the materials we are using. 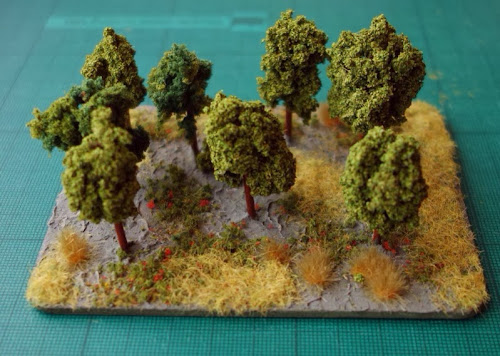 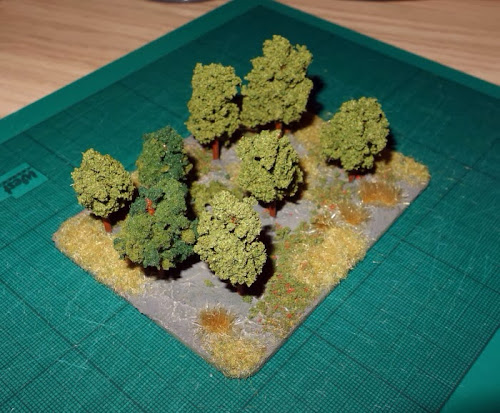 Next up I used a similar base and process to make a graveyard. The grave stones are made from the ends of mini lolly sticks reduced in width and the surrounding hedging was formed from a balsa wood frame. Undercoat the framework as shown below. 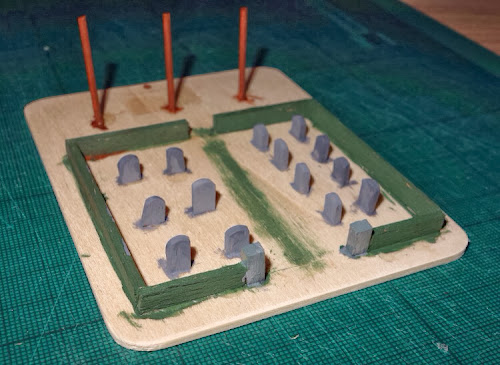 I added flocks and clump foliage to the balsa frame and then dressed the ground in a similar fashion to the woods previously mentioned. The graveyard is intended to sit next to a church building or similar. 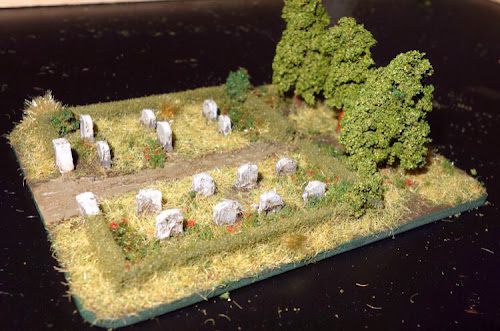 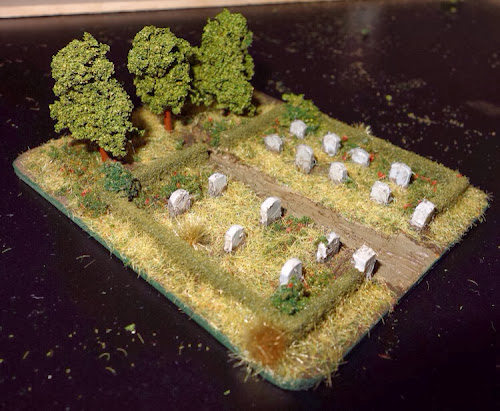 My final piece this month needed to be something high and craggy that would break the board up and count as either hard going or impassable. I used a thin plywood base (pre-bought with a diameter of six and a half inches) dressed as follows;
Process: I glued a ring of the vinyl mat (an off-cut left over from doing the board) to the base. This was to help the feature's edge blend in to the playing surface, but as noted above, that original mat is now in the bin - so I will later drybrush the feature to help it blend with the updated board. I kept the middle bare, so the next part had a better gluing surface. 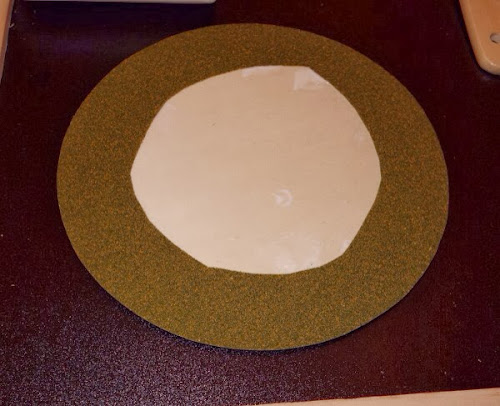 I carved some of that 'oasis' foam that flower arrangers use into a hill top shape. This foam type material doesn't warp but is not particularly nice to handle. 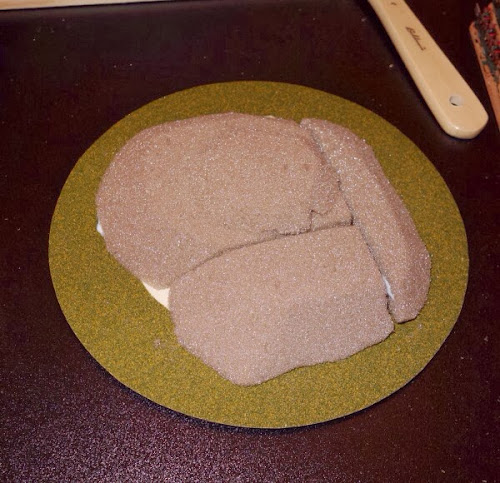 I mixed PVA glue, some paint from a cheap emulsion tester pot and some water. Keep the mix thick, you don't need much. I took a couple of sheets of kitchen paper towel, ripped them into smaller bits and dabbed the mix on and then added them to the feature in a sort of paper mache technique.
Once dry I coated the paper tissue with plenty of PVA glue and sprinkled on cheap course flock to cover all the horrors of crumpled tissue and left it to dry.
In my mixing tray (old ready meal dish), I made up another mix of PVA, paint and water and applied it generously all over the dried flock. I then liberally scattered my favourite flock onto the feature (Woodland Scenics Fine Turf Burnt Grass) and left to dry. The edge of the plywood was painted a green to match the playing surface. Finally I glued 'foliage clump' in strategic places for good looks and to hide any final horrors that still caught my eye.
The feature has quite a few undulations, but the flash on the camera blows them out, so to reinforce the shading (and help with the below photo), I made a watery mix of dark green paint and put it into the hollows and dips. Once dry, I gave it all a quick blast of fixative spray. 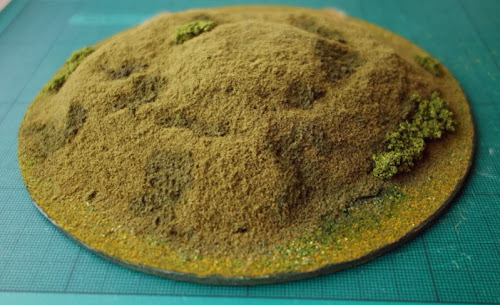 Troops update: Having painted the Empress Dragoons last month, I still had Napoleonic artillery and Old Guard foot from my initial sample purchase to paint. I painted the gun crews first. I coated them in satin varnish and then applied a weakened mix (50/50 with water) of Quick Shade soft tone ink. They looked good when wet, but I was really disappointed when this dried, as my figures looked really flat and dirty and so I think it is better to use this ink on larger figures. I used to use Winsor and Newton Nut Brown ink and floor polish, so I don't know whether to revert to that or whether just to leave my 6mm bright and put a satin varnish on them. I had to do a re-touch on the crew to rescue them.
For my monthly figure order, this time I sent off to Heroics and Ros for some T-34 and Pz IV tanks, together with some German / Russian infantry and support weapons. By time they arrive and get painted, they will probably appear in my next post (which is why I have cracked on with some terrain making). Likewise the river sections and bridges from Baccus 6mm should make an appearance in the next post. I also have some 10mm from pendraken. I ordeded a T-34 tank, 1 bag of Russian infantry and 1 bag of French 1809 Napoleonic infantry to paint up and compare with the 6mm.
Rules and systems update: For WWII, I ordered G.I. Commander from Heroics & Ros (just £2.50) as I remember seeing these at a wargame show and regretted not getting them, so I added them to a figures order. As it turns out, I'm not that keen on them as they look quite dense and are rather data heavy (some will admire them for that alone).
From the Two Fat Lardies, I downloaded the Le Feu Sacre PDF (£7) for napoleonics and I got an excellent deal on e-bay for Force March by Crusader Games for a nifty £6.50 post free (also for napoleonics). 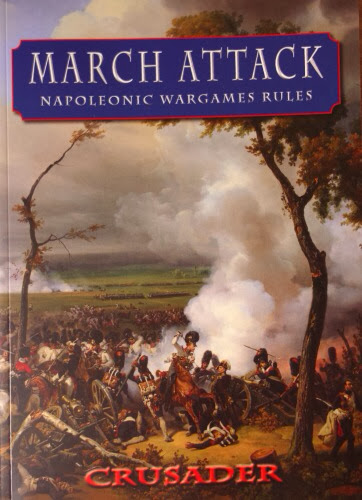 I already have the Polemos Napoleonic rules as a download and I am still wading through rules as I write this, so have not set myself in any sure direction for basing etc this month.
For WWII, I prefer each stand to be a single tank or a full squad, including the section light machine gun(s). For napoleonic, I am not sure what to do. I like the idea of the single stand representing the formation (as in Polemos), but I also like the way March Attack has a battalion split into two bases so that column, line and square can be represented. Either way, I will probably go to smaller frontages, so that the pinboard can get more action into it. I will probably do a few practice games with blank bases, testing mechanics etc while I try and decide what to do.
In the back of my mind is the consideration of going to a square or hex grid - this of course is a distraction to the original simple plan, but I do like grids, having a substantial grounding in board games. I already have a developed WWII tactical system (in DTP format) for a 9 x 6 grid game, so I could experiment with that. If I did do grids, I would want them to be fairly large, to help keep the aesthetic of the battlefield.
I don't want to spoil the board by putting a grid on it, if I am ultimately not going to use it, so just in case I want to test squares, I bought some drawing pins and string to go on standby, so that I can pin the board edge and then stretch the string over the board to make the grid by looping around the pins.
Below is an old shot of a grid experiment that I did some time ago for the napoleonic period in 6mm and stupidly, when the project stalled, I got rid of everything, including the terrain pieces - I really must learn to stop doing that! Note, that river is about twice as wide as the Baccus one that I have ordered and on this size game board - that matters. 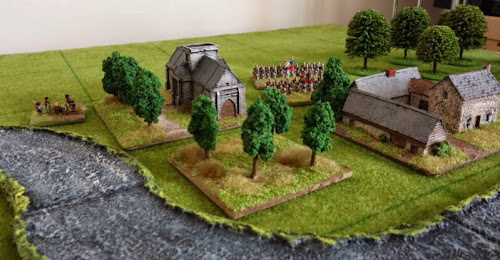 Treats: I was not able to attend the Vapnartak (York) wargame show earlier this month, which is a favourite venue on my calander, so to console myself, under the excuse of 'this is what I saved on petrol and eats by not going' arguement, I bought Battlegroup Kursk rules (£30), a hard bound, 240 page, beautifully illustrated set of rules for the Kursk period. Not sure If they will help the project, but they do use short weapon ranges with measurements in inches, so a conversion to centimeters is already looking promising. It uses individual infantry figures, which never (in my humble opinion) look good to my eyes in 6mm scale, but maybe staying with squad bases and noting casualties might makes things work out (it does though split the German squad into rifles and light machine gun teams) - who cares! it is just a lovely thing to own. 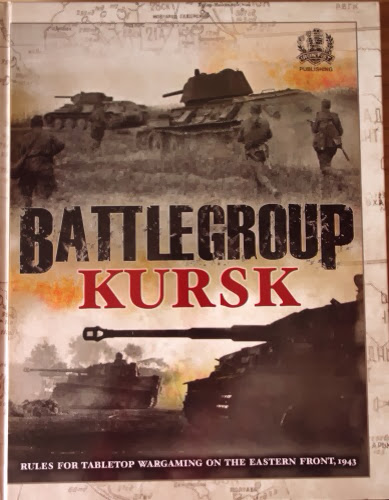 I am also enjoying the board game 'Ghost Panzer' (WWII tactical, mentioned elsewhere in this blog) at the moment, so I am thinking about doing a conversion page to get this system onto the pinboard..... yet another distraction!
Well, that rounds out a fairly active month. I am quite pleased with the progress of the project, which I remain enthusiastic about and hope to have more to share with you in a months time.
Please check back again for next months (hopefully cheaper) update.

Posted with Blogsy
Posted by Norm at 17:29