At the end of last year I completed the second playtesting of Yartzevo Defiant, a 1943 east front campaign module for the Into Battle - WWII Tactical rules (miniature rules for tactical games on hexes). 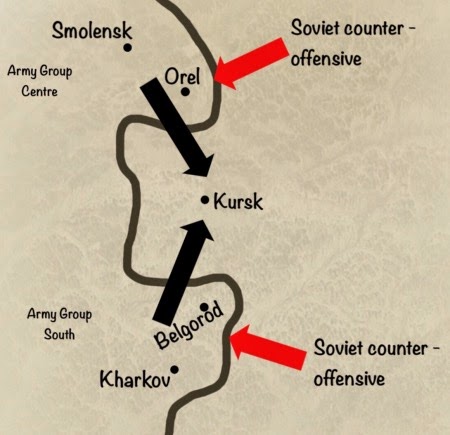 The playtest went well and resulted in a number of design tweaks, which although individually small, their collective influence needed to see another play through.

Sorry to those who had hoped it would be ready by now, but other projects have distracted me. Anyway, the campaign is up and running again and I have started both solitaire and face to face campaigns. All things being equal the campaign module should be available shortly - though a play of two campaign games running side by side is likely to generate something like 25 engagements.

My opening game for the solitaire campaign kicked off to an exciting start. The first battle is based upon the initial Soviet probe on 6th August 1943 and has relatively light forces fighting in an open environment, with the defenders having some entrenchments.

However, the terrain generator threw up an interesting battlefield with quite a bit of cover. A total of four orchard hexes were obtained and laid in a way that divided the battlefield and gave the attackers a corridor of cover that they could use to drive to the enemy baseline .... provided they could reach the orchard!

The Soviet player's heartbeat skipped a beat when German artillery directed at infantry in the open was inaccurate and instead fell onto the Russian SU 76 - their only heavy weapon support - destroying it and leaving it burning (so no chance of recovery).

It was a dangerous moment for the Soviet player, especially as their smoke cover quickly dispersed, but the German HMG in the entrenchment on the small hill (right of the orchard) did not really get much effective opportunity fire and soon the German position was overwhelmed, with the German morale crashing to zero and four Soviet squads moving onto their baseline.

So quite an unexpectedly exciting game (against the background of a gentle opening scenario that is simply meant to just get things started), but things were about to become even more interesting. In the inter-game admin phase when reinforcements are determined, the Germans got an understrength StuG III platoon, some infantry and two artillery missions, while the Soviets just got more infantry, no armour and just one artillery mission to add to their order of battle.

The next scenario is the River attack, which is tough for the attacker anyway, but now with the imbalance of armour and the bridge producing a choking point, I can well see the outcome being that the Soviets will lose the next battle, which will allow the Germans to go over onto the attack. Depending what reinforcements are received after the next battle, things look to get very tight, with both sides having everything to fight for, as failure for the Soviets to break away from their start-up positions could bring the campaign to an early end! This is an exciting start and I am pleased the way the play test is shaping up.

It will be interesting to see how the face to face campaign opens up (this Friday).

In the meantime, here is a link to an extensive overview giving both a play and design perspective of how the second playtest last year progressed and it gives a good idea of the flow of play. It is a 14 page PDF download, so best wait for a coffee moment!

Also a 90 second video trailer that was made just as a bit of fun to try out some software, which has been shown here before, but is repeated below.

Finally, I run a website called Commanders, which is more 'snippet' based than here, so will often show things that will not make it to this blog. I will likely put some AAR updates there.

Link to video trailer (this is just for fun)

Link  - Keep up to date at my Commanders web page.

Posted with Blogsy
Posted by Norm at 13:07