And so 2018 is up and running. Plague and pestilence, in the form of whatever that flu type bug is that is doing the rounds in the UK, has visited this household and having struggled with it once, it has cruelly decided to embrace me second time! Happily the latest issue of Wargames, Soldiers and Strategy is out, with a focus on tanks, so a good cover-to-cover read. 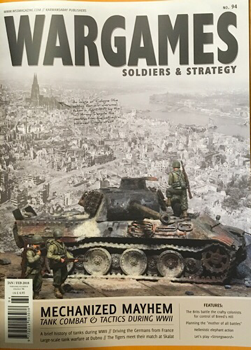 So while it has been a bit of a slow start to the year, I thought it worth taking the opportunity to break with my tradition of only doing article based posts and do a follow up on my ‘Reflections of 2017’ item, since there was such serious talk in that post of a change of direction in hobby management. So was all that hot air or did things change and how do those changes look?

Well it was never about a new year resolution thing, the evolution of those ideas had already been gathering pace for a couple of months and it just so happened that the end of year coincided with an acceleration of clear intentions.

The shelves have now been cleared and are now occupied by a more focussed boardgame collection, together with only figures in the scale band of 10 - 12mm, plus supporting terrain. This has reversed a storage problem in which things were spilling onto the floor, to actually now having some empty shelf space! Nothing escaped the ‘ravaging review’, even the paints have been culled to a more sensible limited palette, so that they fit into a single container.

For those of a nervous disposition, look away now ....... some items have gone to the waste recycling centre! Well these are really those items that don’t readily sell or suit the donation line of disposal, but rather, have the bad habit of just hanging around forever and winking annoyingly at me and includes those things kept because one day they may be useful, but in truth, seldom are. So, bin, bin, bin, out of sight, out of mind, good, good, good. It is a bit of a one way street, so once done ..... it is done, it can’t be undone and is actually quite cathartic in its own strange way.

Reading? yes, there is now a book on the go. Still the same one! (Harold the King Who fell at Hastings by Peter Rex). Getting immersed again in the 1066 history is part of this years main project, 1066 Hastings in 12mm on hexes.

Painting? yes, figures are prepped and on sticks and getting daily attention. The Kallistra packs come in blisters of 32 foot and 16 cavalry, so I am doing a blister at a time and really trying to apply ‘speed painting, it’s good enough at 3’ foot’ techniques. I have moved to brush on brown Hammerite special metals primer, followed by a heavy inking with Vallejo wash, which is a very pigmented wash. The idea is just to catch some areas with block painting and then knock it back with a gentle thinned wash - will it look OK? The jury is still out on this. The last time I speed painted, more time was spent putting it right than saved!

Terrain? yes, unpainted buildings and some home made explosion markers are passing across the painting table and two marsh tiles that needed to be dressed for either 10mm or 28mm can now progress via the 10mm look and will become new additions for the 1066 project.

Gaming? well nothing face-to-face at the moment (due to said pestilence and Mike has visitors staying), but I have run a couple of solo games. The Snipers Den scenario from Lock ‘n Load’s Heroes of Normandy module went onto the table for my promised mid-week game, though it continues to puzzle me as to how the British paratroopers can win. That sniper in the steeple has an all commanding position and the two German machine guns have formidable potential, especially when one of them eventually moves to the ground floor of the church, below the steeple.

This weekend I am putting my Invasion 1066: Hastings boardgame on the table for a re-connection with the rules and to start thinking how I might bring this game engine to the 1066 project.

I have been buying a few book titles, with a view to mating them, subject-wise, with various games that I want to play. The idea is that having a bit of theming between a game and related book will produce a richer experience. Of itself, that might mean that around 3 weeks or so are spent with a particular game or system at a time, which will reduce the amount of jumping around that I do between systems and again reinforce the commitment I want to make to doing more reading.

Some wargame shows are getting pencilled into the diary and certainly for one, we will be making a weekend of it, so accommodation is already sorted. There are several shows between February and June that make good candidates. I did three last year and would like to add one or two to that for 2018. It seems that supporting the show circuit and ensuring it survives is taking on a greater importance at least in my mind.

A 1066 project label is going to be started here, as the project is certainly going to generate a number of posts over the next three months or so.

There are quite a few other things that beg to be squeezed into the 1st Quarter calendar, but it will be potentially overloaded. In addition to the 1066 project, I have some plans to demonstrate various aspects of Lock ‘n Load Tactical, which I hope will be interesting and also to return to the first board wargame that started me off (1977) into such a pleasurable part of the hobby. Some early playtesting of a proposed west front ‘44 module for my Tigers at Minsk figures on hexes rules is planned, I just need to decide which army to build up. Though I do like my Churchills, Pendraken have just re-modelled their Shermans, so that may decide things, perhaps it will be best to wait until I see them in the flesh at a show.

Anyway, bottom line is that the things discussed in the ‘Reflections 2017’ post are readily happening and a big part of that comes about by reducing time spent staring into a computer screen and it actually feels good to be liberated even to a small degree from the internet and being generally more productive, even at a low level. Is this a sustainable behavioural change? I suppose the ‘Reflections 2018’ post will be the time to best assess that.

As always, thanks for taking the time to read and normal services will resume shortly :-)

Commanders is my sister webspace and is a bit more news, snippet based than here