On Sunday 4th February, the UK show season in the north kicked off with Vapnartak, a well regarded wargame show, held at the Racecourse at York (north east UK). 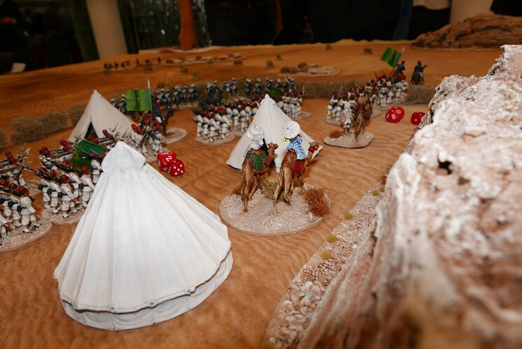 This post is just a brief personal perspective of the visit.

As an early show in the wargaming calendar, it is hardly surprising that this popular show gets packed pretty quickly. The venue is large, but even so, moving through the crowds and trying to get through to various vendors amidst a phalanx of browsers can feel a struggle. We arrived at 10 AM (Doors Open) and joined a fairly lengthy queue.

As with last year, I was in the company of Mrs. Smith as we took an opportunity to do an overnight stay in this wonderful city. There are quite a few seating areas dotted around the place, so with her Kindle in hand, I was free to look around and then return to ‘base’ for a quick sit down, relieve myself of any goodies bought and then off again to do another circuit.  It is a good show to take a partner to.

I was more mobile than last year, but still sore, so still had to do some targeted visits to traders of current interest to me and was not able to browse the full wonders of the place as much as I might have liked. In terms of balance, I would describe York as trade heavy, with the number of display games fewer than I would expect from a show this size and in truth a little disappointing to me in that respect. However, the games that were there were VERY well done, both in terms of ideas and the visuals. For a fancier of the ‘wee chaps’ everything was in the larger scale, which is reflected in the few photographs that I took.

I have to say it is a great show, but if I were to offer one piece of feedback it would be to encourage some scale diversity at the game tables.

The trade side was good for the smaller scales. In 15mm I saw Donnington Miniatures, Museum Miniatures and Peter Pig. At 10 / 12mm Pendraken and Kallistra were present and Timecast had their new ‘moderns’ sculpts up and they are very nice. For 6mm, Pete from Baccus was there and his display case is a pleasure to browse through.

I only had opportunity for a few conversations. Timecast said their Modern U.S. forces should be out very shortly (the infantry sculpts are lovely). Pendraken said they were working through their German WWII vehicles with new sculpts and that a goodly variety of half-tracks were about to be done and Paul from Kallistra agreed with me that there is a growing interest in the cross-over of figures and hexed terrain and he is busy, especially with interest in his 12mm figures.

Dave Lanchester’s range of books and wargame rules is growing each time I see him and his stall is now one of my favourite hits at the shows. Caliver Books were also there and outside these two, I was surprised at how few traders were sporting rule books.

The bring and buy was simply manic and caused a problem with the flow of foot traffic on that particular floor. I think it needs some bigger space to manage the interest shown. I didn’t even attempt to get into that queue, though that is more a reflection of my limited amount of standing capability than of the bring and buy itself - as clearly many were happy to queue.

We paid £6.40 for two coffee’s and two bags of crisps, which considering the venue, seemed okay to me though I suppose I should lie at this point and say I bought fruit instead of crisps - thankfully, I didn’t see any fruit, so crisps it was :-)

So overall, did I spot any trends? In brief, game displays were large (and beautiful), certainly not the sort we play at home, figures on the table were large, again not an honest reflection of what many of us have on our tables and there was an absence of those ‘everything in a box’ euro and figures type games, which are meant to be killing off the ‘big battle’ games. But visitor numbers seemed high and the age range was more diverse than the doom and gloom prophets who proclaim the greying hobby is about to implode might suggest. It is still middle aged men and older that make up the bulk of the numbers, but there were a goodly number of women and under 16’s there as well.

I have been visiting the show circuit for many years and see the same traders over those years and there is definitely a sense that we are all growing a bit older together! But if nothing else, York is a trade show and there is plenty of new blood amongst the traders. I did feel after leaving the show that the hobby is in good health, it might morph and wriggle a bit, but good health never-the-less.

I left around noon and some people were just starting to drift away then, but it was still very busy. Oddly an evacuation alarm was sounded twice. Each time partway through the emptying out process the alarm was cancelled and we were all stood down to return to buying mode again. I think they were false alarms and people generally seemed to remain good humoured about it, though I can imagine the traders being less than happy about having to abandon their stalls, leaving them insecure.

I did take a shopping list and mostly stuck close to that and then added a couple of treats;

From Kallistra I got the rest of the 12mm blisters (8) that I think I will needed to do everything in my Hastings 1066 project that is planned. I am now faced with quite a bit of lead to get through.

From Pendraken a 10mm WWII British army and a blister of M10 (new sculpts) tank destroyers went into the shopping basket. This is to start the preparation of (at last) taking my Tigers at Minsk rules into the west 1944 - ‘45. I just hope the company get around to re-sculpting the Churchills pretty handy. I also bought a couple of pre-painted building packs by Escenografia Epsilon (a Spanish Company). They have something of an almost scruffy rustic look, which I like as they bring plenty of character to the table. I bought a pair of Normandy thatch / stone buildings and Mrs. Smith bought me ‘Spanish house number 1’, which has a ton of charm and a small footprint and which of course will appear in the next battle ....... wherever the setting :-)

From Warbases, enough packs of 80mm wide bases were picked up to meet the needs of the 1066 project.

From Timecast, I couldn’t resist a set of their rubber 6mm fields. These will look okay glued down onto some of my hexes just to give a bit of variety without troops toppling over. I also got some small poplar shaped trees. I admired their Cold War stuff, but that is for another day I think.

From S & A Scenics, I picked up some loose small trees that will likely be used on some scenic bases at some point.

From Dave Lanchester, the Osprey Campaign Series book on Hastings 1066 caught my eye. I had wanted the magazine annual on Hastings that the company that do those fine Medieval and Ancients bi-monthly magazines have produced as this years ‘special’ (they did Agincourt last year), but it has not been in my WH Smiths (UK high street book / stationers) or at the show and as an impulse I thought the Osprey title might be a bit more useful from my 1066 scenario building needs anyway.

Before I do a few pictures, I would just like to thank all of those who make these shows so enjoyable and smooth running. That includes the hosts, the traders and those who have gone to a great effort to put games on. Thank You. The show deservedly has a high reputation.

Sorry that none of the following are attributed. 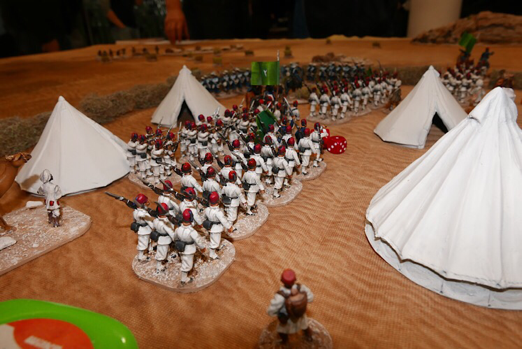 Above - This was just a small part of a very big table. they look like they have just had their orders to move out! 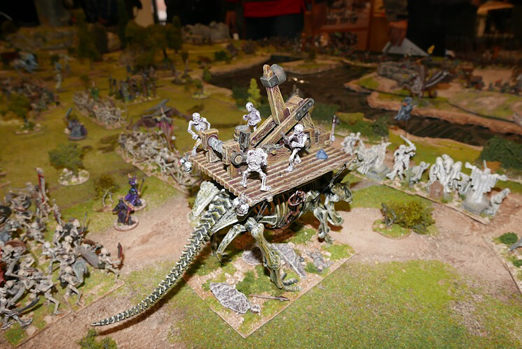 Above - This beast was from a game that had a variety of wonderful and I think mainly ‘dead’ creatures. 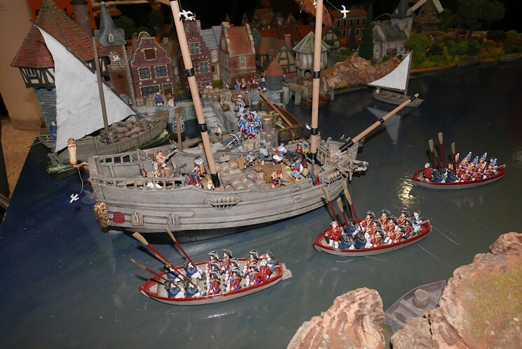 Above - I don’t know what the game was about ...... it just looked splendid, the amount of work in those small boats is noteworthy. 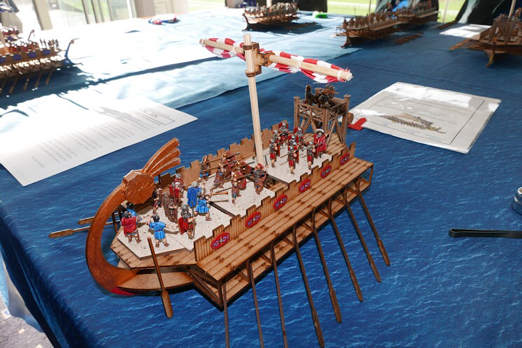 Above - there were about a half dozen of these absolutely magnificent models on the table, simple but perhaps one of the best bits of eye candy at the show. 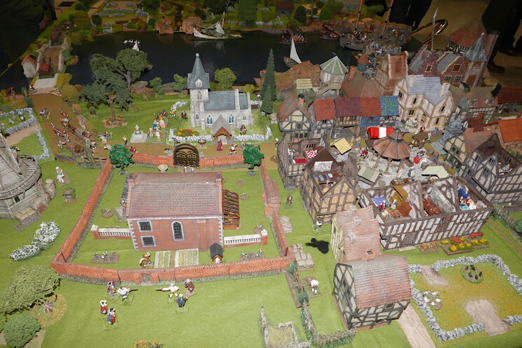 Above - Part of a bigger battle, when you get your eye in and have a look around, there is just so much to really look at, a classic example of the thanks the punter owes the gamers who make this sort of effort.