This post introduces a new supplement for the hex based Into Battle tactical rules.


It covers the 1944 - ‘45 period on the western front and adds a few additional rules, equipment lists for Commonwealth, U.S. and German forces, some additional terrain types and a scenario based upon a German counter-attack against a Canadian held village. 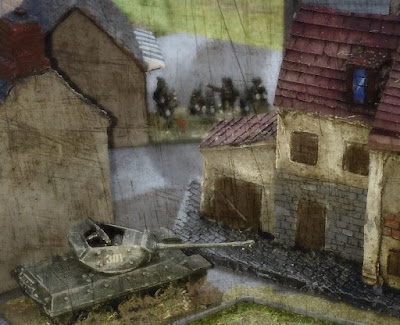 The rest of this post will discuss some of the design perspectives of the module / system and list the few amendments that have been made to the main TaM rules. The resource section will give links to the download files for Into Battle - WWII Tactical (The West '44 to '45).

For those who don’t know, the Into Battle - WWII Tactical rules were designed specifically to work with hexes in a small space. Most of the scenarios in the base rules are played on an 8 x 6 hex grid, which with 4” hexes, only needs a space of just under 2’ x 3’ and I manage to fit my tiles for these scenarios onto a large pinboard. My own collection is based around Kallistra 4” hexes and Pendraken 10mm figures.

The scenario provided in Into Battle - WWII Tactical (The West '44 to '45) is the largest ‘official’ scenario to date, being on a 10 x 9 grid and this fits fine on a kitchen table type space.

The system is solitaire friendly and scenarios should easily play through in a typical game session and even allow for the players to swap sides and run the game again.

If you have not come across the rules before, for the sake of brevity, I will just mention four of the design features that I like and that form the heart of the game;

The Game Clock - The game has a strict sequence of play, which of course by default generates turns. However, all the game features use a Game Clock that runs alongside the turn sequence. So a battle may start at 1000 hours and reinforcements may arrive at 1040 hours and the scenario might be scheduled to end at 1130 hours. At the end of each turn, the Game Clock is advanced a random number of minutes according to a dice roll.

In Command and being Out of Command - Units are either in or out of command. Being out of command stops the unit doing anything that turn. At the start of the turn a player chooses one hex and any two adjacent hexes to that and all units in those hexes are automatically in command. This shows the commander’s focus being on the most important part of the battlefield at that moment in time. Every other hex containing friendly troops test to see whether those troops are in command. Though this is a random application, its intent is to stop a gamey trait of units always having 100% situational awareness, that the player can then exploit by too easily allocating actions for perfect responses. It provides moments of chaos and releases the players grip on total control on all aspects of a game. Command is tested at the start of each player turn.

The Action Phase - Units in command can conduct one action per turn, whether that be fire, movement, attempting recovery from pin or removal of an opportunity fire marker. It reflects a single slice of time in which different units will have different tasks or needs to meet and provides a certain dynamic to play. 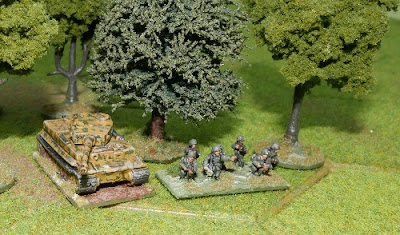 Morale - units start the game with a stated morale level and it drops by one per base lost through the rigours of combat. When a level reaches zero and for every loss there after, every friendly unit must test for fallback - if they fail, they must drop back one hex. This will prise defenders out of key positions as their situation becomes dire and it will stall failing attacks, in both cases, creating earned opportunities for the other side.

(The West '44 to '45) looks at the later stages of the war and so brings in some restrictions on German forces as the months progress. The rules assume some shortages in November / December as industry is hit and resources are husbanded for the Bulge Battles and then from January onwards increasing pressure is applied to the German side in terms of morale, command efficiency, fuel and airpower. This has the greatest effect on offensive / counter-attack capability, while having a more gentle effect on defensive capability.

The rules recognise that wargames in this scale can exist in a somewhat cartoon world, with powerful guns and vehicle engaged typically at just 300 - 700 metres apart, when realistically engagements would often be double that and the crews of vehicles such as the JagdPanther were trained to stand off and engage at around 1800+ metres. But wargamers do want to see these vehicles on their tables and so we can here. The special rules for this module in a similar vein are something of a caricature of the German situation in this late period of the war.

One of the problems I came across when doing this module concerned the penetrative capability of small bore, but long calibre guns Vs larger bore and shorter calibre guns and some of my results were not matching what was being reflected in official gun penetration figures. I managed a fix, but this has meant that a few gun types from the Into Battle (east front 1943) original lists need to be slightly downgraded (details below). 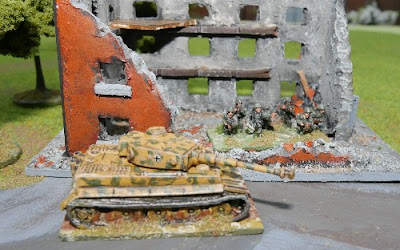 As part of the tidy up of the Into Battle rules, I have added extended examples concerning linear terrain features (hedges, walls, bocage, stands of poplar trees etc), which in this system are IN HEX features, while in most commercial games at this scale, they sit on actual hex sides / boundaries. I have also taken the opportunity to modify the line of sight rules concerning firing through friendly units.

Some new terrain types have been added and players may find the sea wall terrain useful for invasion scenarios. For battles set amongst the mountainous terrain of Italy, the crag terrain may help reflect natural strongpoints. 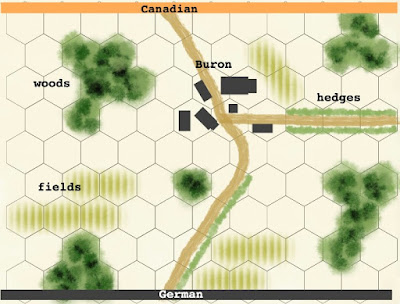 New scenario - The Counter-Attack at Buron scenario covers an action in which Canadian forces have just captured the village of Buron. German field tactics were to counter-attack immediately with a mixed armour and infantry force, supported by artillery and so the Canadians quickly take up defensive positions and bring up their 17 pdr armed M-10 Achilles in anticipation of the attack.

This scenario is played out on a bigger hex grid than usual (10 x 9) and is simply intended to show the system easily being able to cope with enlargement, while still keeping to the useful size of what we might call ‘kitchen table gaming’.

The March 2018 version of Into Battle and the new (The West '44 to '45) module are available at the links in the resource section below. These files are in my DropBox account (thank you DropBox) and when accessed, you may be invited to open a DropBox account - you don’t need to, you can just close that window and move on to the downloads.

These documents are free to download for personal use. I retain their copyright in case I want to go down a commercial route at some future point. The rules will not be to everyones taste, but please have regard for the amount of work that has gone into presenting them as a tight ruleset.

For those who wanted to try the rules, but only have a western based collection, I hope the new lists will open up some gaming opportunities. As always, thanks to those who follow this blog and take the time to comment, it does help maintain the enthusiasm in sharing what amounts to significant pieces of work.

Here are the changes to the previous edition of Into Battle rules;

Amend - Friendly units have always blocked Line of Sight (for fire purposes), but the rules now excludes those things that fire a shell type projectile (so firing tank, anti-tank guns and mortars) from this restriction.

Amend - Optional rule ‘Restrictive Command’. The rule reduced automatic command from a designated hex plus two adjacent hexes to just the designated hex. This is to deal with formations that had specific command / training problems, such as shattered formations, green units and tank formations without radios etc. This rule has now been loosened so that under Restrictive Command, automatic command is reduced to a designated hex plus ONE adjacent hex. Of course the scenario designer can always drive this down to a single hex if they feel the situation warrants it.

Amend - The rules dealing with linear features (hedge, wall, bocage and stands of poplar trees) have had their wording improved and a full page of related examples have been added to the examples section at the rear of the rules. Though these features sit out towards a hexside, they are still ‘in hex’ features, unlike many commercial games that have these actually sitting on the hexside. 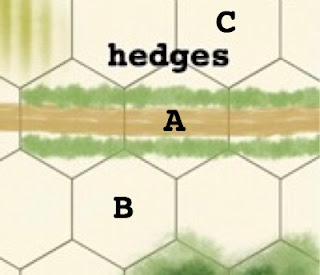 Optional rule section - adds the Shoot and Scoot rule from the module for tank destroyers / Jagd types. This allows these ambush type vehicles to fire and then immediately as part of the same action, ‘attempt’ to pull back into one of their rear hexes.

Optional rule section - brings some engineering capability into the game. The rule is quite loose, it is for the scenario designer to decide what sort of task is required and how it is implemented. So for example the scenario special rules might designate two rifle sections as engineers and then require them (unpinned) to attempt to blow a bridge each turn, on say a die roll of 1-3, but adding a modifier of +1 in each subsequent turn if they fail etc. Or allow for the hasty laying of mines etc. Or breach bocage, as outlined in the new terrain rules. 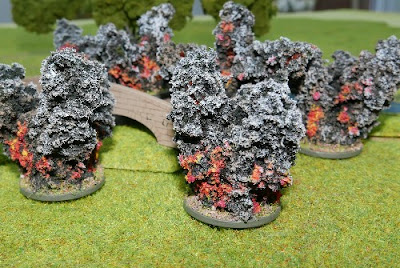 Commanders Website, this is my sister webspace that supports my rules and game playing and is a bit more snippet based than here. LINK