“You’re quite right, whenever I think of this attack, my stomach turns over”

Adolf Hitler prior to Operation Citadel (to Guderian 10th May 1943).

Operation Citadel was the name given to the German summer offensive of 1943 on the east front, perhaps more commonly known as the Battle of Kursk - the largest tank battle in the world!

A large area of Soviet controlled territory pushed into the German line and the Germans planned to thrust into the northern and southern flanks of this salient, cutting it off with their enveloping forces meeting just behind Kursk. It would bring the dual benefits straightening out the line and bagging a huge number of Soviet forces. 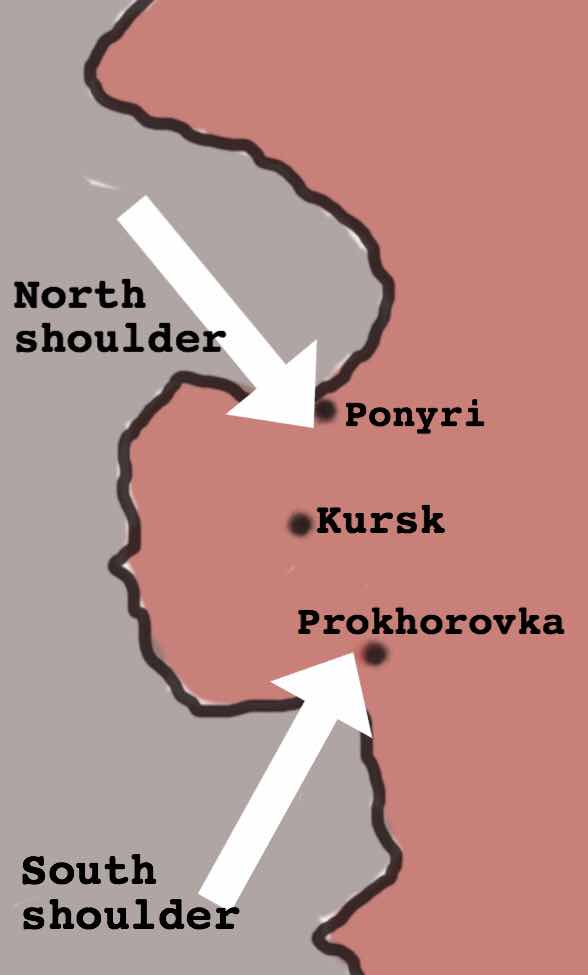 The Soviets, aware of the threat, built up belt after belt of defensive works, heavily protected by mines and registered artillery. They intended that the German forces should destroy themselves on these defences and that at the right moment, they would unleash their large reserve and launch a counter-offensive.

Citadel started on 5th July 1943. In the North, little headway was made and intense fighting would centre on Ponyri, which would become likened to Stalingrad in nature, due to the grinding nature of the battle. To the south, at huge cost, bigger gains were made and as the German forces neared Prokhorovka, the Soviets, fearing a breakthrough, released their reserve, 5th Guards Tank Army, against II SS Panzer Corps.

On 12th July, huge tank battles erupted in front of Prokhorovka. A contest of material followed, one which would essentially go the Soviet way. By 23rd July, Hitler was compelled to formally call off the offensive.

This year is the 75th anniversary of Citadel. Throughout the month, I will be wargaming a number of Kursk related games, at the core of which will be the Lock ‘n Load Tactical system, using their ‘Dark July’ expansion for the ‘Heroes of the Motherland’ base game, which has six scenarios that covers fighting in the region just west of Prokhorovka and specifically at the Oktiabrski State Farm and Hill 252.2

This is a picture of the full map area, most of the scenarios use portions of it, but one does use the full map, which at 39 x 22 hexes at 50 metes per hex, is giving a representative battleground of 1950 metres by 1100 metres, or roughly two by one kilometres. Wheat fields - they are pretty much everywhere and are classed as open terrain, but squads and weapon teams need to be ‘spotted’ as though they are in degrading terrain.

Anti-Tank Ditch, that is the dark line running down the centre of the map, parallel to the dirt track.

The road to Prokhorovka, this sits immediately above the rail track.

Oktiabrskii State Farm - at the top of the map (left side) sitting on the dirt track. The collection of buildings ate treated as ‘light construction’.

Hill 252.2, the scene of bitter fighting and sitting below the State Farm in the lower half of the map.

A rather nice rule in the module concerns Tank Emplacements. These do not give a terrain modifier but negate any anti-tank hit that would normally strike the hull. Vehicles must back out of them to leave the hex and if they do, the emplacement is removed.

The module provides optional rules, giving vehicle size modifiers for the ‘To Hit’ process and giving a +1 modifier when attempting to spot vehicles. Both these will be used.

Reading - my ‘read along book’ is Kursk, The Greatest Battle Eastern Front 1943 by Lloyd Clark and published by Headline review. For whatever reason the book opens with the background story going back as far as 1917 (Revolution) for the Soviets and 1919 (Versailles Treaty) for the Germans. The book is well written, but I am up to page 99 and not  a whiff of Kursk yet! That is not what the title of the book suggests.

Anyway, scenario one is just getting set up and the first thing that strikes me is the high counter density in a relatively small space, this is going to be a high firepower / heavy casualty game, which of course is how it was.

My Gaming space is registering an uncomfortable 34.5 degrees today, I need this heatwave to end if I am to be as productive as my game schedule demands!

Link to the previous post (discusses a Kursk battles month)

Article looking at the gun / armour using the T34 and Tiger I tanks as examples. LINK