1471 - A rendezvous and ambush at Piggy Longton 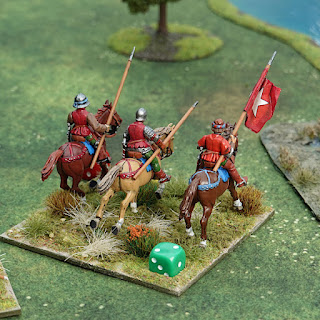 The Battle at Beacan Farm as reported in the Dungborough Chronicles.

While my forces continue to build for the Bosworth project, there are some new French mercenaries (Pike) leaving the painting table that allow another escapade at the fictitious Parish of Piggy Longton in Dungborough.

The French King has sent money and troops to England to aid King Henry VI. Landing on the Welsh coast just eight days earlier, the foreign mercenaries are now nearing Piggy Longton, where they expect to be greeted by Lord Darcy, a Lancastrian supporter.

His neighbour, Lord Trebian, of Yorkist loyalty, having received news of the landings and the close proximity of the ‘enemy’, gathers a strike force to intercept the mercenaries, defeat them and take their war chest.

Please use the ‘read more’ tab to see how the Dungborough Chronicles described the battle.

Note - a link to the full ‘historical’ and geographical background to the fictitious parish can be found in the Resource Section at the foot of this post. 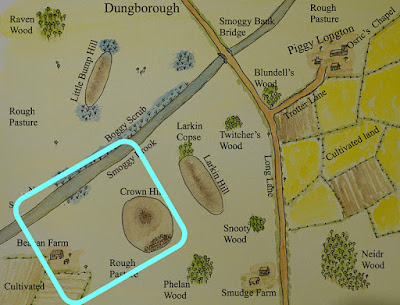 Above - the Piggy Longton Parish with our battlefield highlighted. 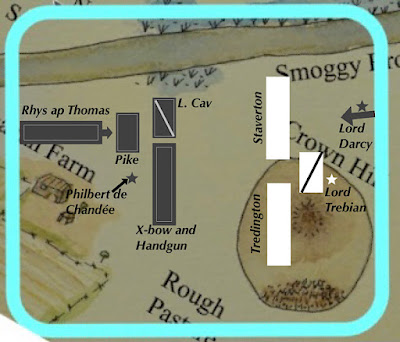 Above - opening dispositions together with the marked entry point for Lord Darcy’s reinforcement,  the ‘Men of Piggy Longton’. This is 4' x 3' space. 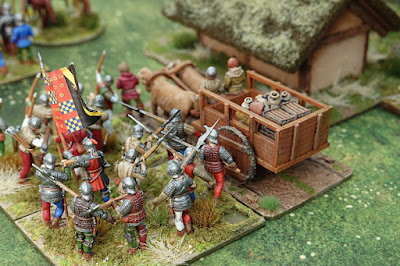 Above - Of no lesser significance was the War Chest that accompanied them on ox drawn carts. It provided Henry with enough money to keep an army in the field for two months. For additional security, local Welsh nobles who had greeted the invading force, had supplied contingents of longbow and bill, together with a small lance of light cavalry, under the command of Rhys ap Thomas, to escort the funds.

Not expecting trouble, Lord Darcy had gathered the ‘Men of Piggy Longton’ (a mixed contingent of bow, renown for their archer prowess and militia billmen) at the hamlet as the reception party.

Neighbouring Lord Trebian, not known for either patience or caution, planned to move swiftly and attack the Lancastrian column while it was on the move. He had brought his contingents from nearby West Rottingham, crossing Smoggy Brook at the bridge and then moving down onto Crown Hill to block the path of Chandée. He directly commanded his battle hardened mounted Men-at-Arms, while the capable Earl of Tredington and Duke of Staverton each had contingents of bow and billmen, drawn up in two wards. 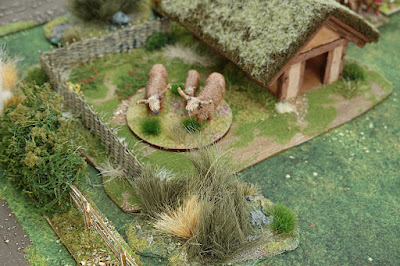 A local farmhand from Beacan Farm, whilst tending the fields, ‘noting a great kerfuffle’ at Crown Hill, made off on foot towards the hamlet to raise the alarm. Entering Trotter Lane, he met Lord Darcy, who was already arraying his men, having heard the fire from de Chandée’s handgunners in the distance.

The Battle at Beacan Farm.

The experienced Chandée, never taking anything for granted and treating everywhere as enemy territory, was not the sort to be easily caught out. Once at Beacan Farm, he ordered his light cavalry ahead, to scout the hamlet and make initial contact with his allies, while arraying his handgunners and crossbowmen defensively across the front of his resting column.

The light cavalry having barely travelled a couple of hundred yards, caught first sight of formed enemy contingents with Yorkist banners, heading for Crown Hill. They promptly returned to Chandée with the news, who began urgent deployment of his full force into battle line. 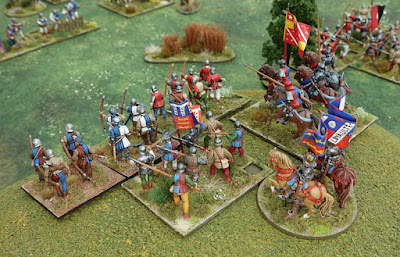 Above - as Lord Trebian reached the vantage point on the hill and seeing the Lancastrians rushing to get into their fighting formations ..... he attacked immediately!

The sides set up with their front contingents just inside maximum longbow range. 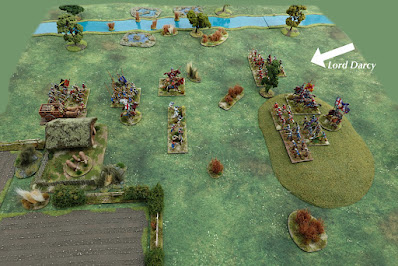 The war chest cannot move from it’s starting position. The moment that any Yorkist unit makes contact with the cart carrying the war chest, the money is captured and the turn immediately ends. The unit that contacted the oxen cart is considered to be carrying the war chest. The Yorkists then conduct a special escape turn.

The Special Escape Turn - Each Yorkist unit rolls 3D6 +3” and moves that many inches directly towards and over (if possible) Smoggy Brook (no terrain penalties are calculated for this escape turn, the unit simply moves the number of inches rolled). If a unit would leave the table, the Yorkist player can instead allow that unit to remain on the table edge, to keep the Lancastrian fighting force intact. At the end of their movement, each Yorkist unit can pivot on it’s centre to face any direction that it wishes. A new normal turn then starts, with the usual sequence of play.

During normal turns (i.e. not the escape turn), all movement through bog and the brook is done with the unit’s movement allowance reduced by 1DU (a system measurement).

As soon as the unit carrying the war chest crosses to the other side of the brook, the game ends and the Yorkist player immediately wins.

In any case, if during play, an army is demoralised as per the normal Sword & Spear victory condition rules, the game immediately ends and the surviving player claims the war chest and wins.

At the start of turn 4, the Lancastrian player rolls 2D6 and if the player get doubles, places Lord Darcy and his two contingents on the table edge at the designated entry point. If failing, then at the start of every turn there-after, roll again, but each time adding in an extra D6 (cumulative - one additional for each extra turn) for each new turn. Once any one set of doubles are rolled, the reinforcement arrives. When they arrive, immediately add two additional Lancastrian activation dice to the draw bag.

Notes on the game engine.

In Sword & Spear, an activation dice for each friendly unit on the table is placed in a draw bag. So we start the game with 6 red dice for the Lancastrian (+2 when reinforcements arrive) and 7 white dice for the Yorkist. They are drawn in groups of 7 dice, the odd number guarantees that one side per draw will have more more dice than the other and they are treated as the active player for that draw. The final draw in the turn will typically have less than 7 dice.

Once the dice are drawn, the player rolls their dice and depending on the numbers rolled, they can allocate them to various units to perform various Actions. To be active, the dice roll must be equal to or higher than the ‘Discipline Rating’ of the unit selected, so obviously high rolls are good and rolls of 1 and 2 (and more often than not 3) are generally useless, wasted and set aside for that turn.

Get on with it!

Yorkist arrows fill the sky. The Lancastrian handgunners do not have the range to engage and dare not move forwards at this stage. The trained crossbow on the other hand do find their mark, but it is an uneven contest and the Lancastrian right wing fall back.

The Lancastrian cavalry are also stung by an arrow storm on the other flank and the horsemen are likewise forced to fall back. 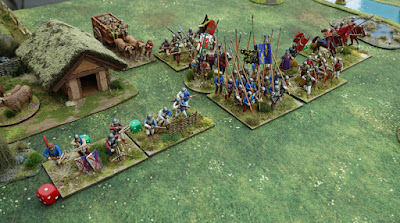 Above - in an uneven contest, Chandée pulls his front line back, but by pulling back, Chandée has not only set up a cohesive line, but is playing for time to allow Lord Darcy to bring help from Piggy Longton and to fall upon the Yorkist rear!

The Yorkist line starts to advance and Lord Trebian orders his mounted Men-at-Arms to dismount and push towards the enemy pike in the centre. 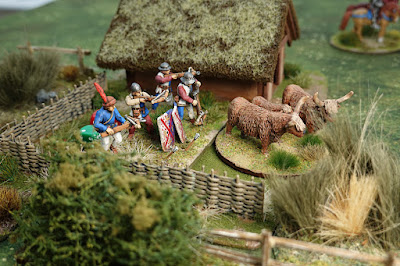 Above - as Trebian’s left advances, ahead of the them, the French handgunners are put to flight and the crossbowmen take heavy casualties and fall back to seek protection at the barn, though before they do, they manage to see off one the Yorkist bow contingents.

On Turn 6, the Lancastrians are now rolling 4D6 for their reinforcements and they get their ‘doubles’. Lord Darcy arrives behind the Yorkist right flank and they stride out to close the gap with the Yorkists. More importantly, their arrival contributes 2 additional red dice to the draw bag. 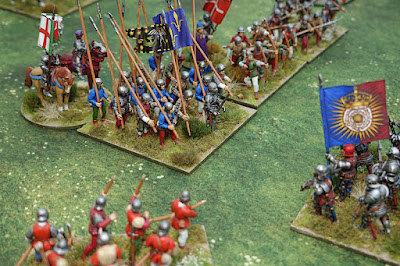 Above - Trebian brings his M-A-A to face off against the pike, while on his left, having got rid of the crossbow and handgunner threat, a friendly archer contingent has positioned itself to assail the flank of the French long spears (Pike).

Neither side can take anything for granted, a Yorkist archer contingent on the right (Staverton's command) routs and everything hangs in the balance. 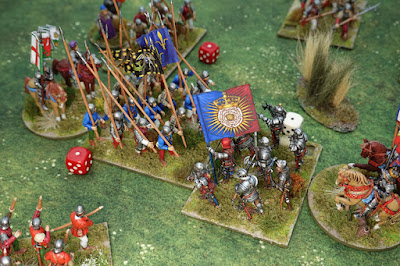 Above - Chandée acts boldly to have the French long spears charge into Trebian’s Men-at-Arms, this both shocks the Yorkists and negates the archers ability on the flank to shoot, an opportunity most certainly lost as the Lancastrian cavalry return to the fray and threaten directly those same archers.

The charge of the French long spears is initially absorbed with heavy losses by the Men-at-Arms, but as push, shove and hack continues, the long spear gain the upper hand at this critical point on the battlefield and the casualties become too much for Trebian’s men, who break and rout. Trebian has his own near miss! 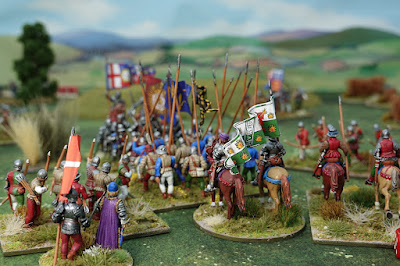 In game terms, Yorkist losses are now great enough that every Yorkist unit must take a morale test. Failures create more losses and routs and the Yorkist force then hits it’s demoralisation level - they collapse and flee the field. Lord Darcy rides ahead and greets Philbert de Chandée and Rhys ap Thomas, greatly impressed by the French long pointy sticks and their shattering of Trebian’s finest!

A very fun game, not a lot of units per side, but enough going on to entertain and potentially give a tight finish. In the end, with losses suffered by both sides, it was going to be down to that final pike (long spear) v MAA melee in the centre that would decide it ..... and quite right too.

The Yorkist’s suffered three notable setbacks. Twice, when they rolled their Action Dice, they got a run of 1’s and 2’s which were totally useless and in effect, brought on a bout of hesitation.

Thirdly, having done an excellent job of neutralising the crossbowmen and handgunners to their front, Tredington's archers didn’t get a chance to disrupt the French long spears because Trebian’s Men-at-Arms were too keen to rush forward at the French and Chandée then took the initiative to launch his own charge.

Had the archers done their work first, the French would, through casualties and the loss of Impetus, have allowed the MAA to fight on more equal terms. So who knows which way that might have gone!

However, it must be remembered that the Yorkists had Lord Darcy to their rear, so there was a bit of an imperative to ‘hurry up’ and keep moving forwards, which brings us back to those costly moments of hesitation that the system creates.

Once again the Piggy Longton map manages to deliver a good pre-generated landscape, with a new part of the map being fought over and allowing a new story to be told.

The 80mm based units seem to be working fine and the nuances of the rules continue to be revealed to me.

More bill and bow units are now needed to swell the ranks so that something nearer to a set piece battle can grace the table, but that is likely a doubling of what I already have and will take a bit of time, so be prepared for more Chronicle tales from Piggy Longton, while that happens.

All about Dungborough and Piggy Longton. LINK

A bit about the Bosworth Project. LINK