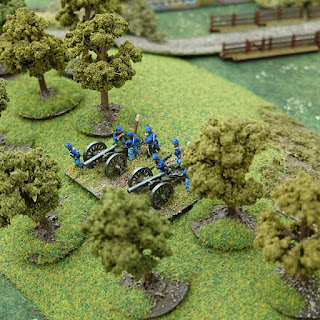 As I continue to convert my Hex based rules, 'Two Flags - One Nation', back to an open table set, I am using the McPherson’s Ridge scenario as a benchmark for testing.

Typically, as with the battle, we would expect under these rules to see the Confederates attack across Willoughby Run and tangle with the Union cavalry who are in ambush positions. Eventually the Confederates will push the cavalry away and make it onto the ridge ....... just as the Union's Iron Brigade are running up the other side of the hill.

The see-saw clash will often give a close game. Will the Confederates hold on to their tasked objectives, or will they be thrown back by the Union wave of reinforcements?

Anyway, in today’s playing, there was quite a one sided surprise. I don’t think I like those!

The game is played on a 4’ x 3’ 8” table and the figures are 12mm Kallistra. The post may interest those painting up their Warlord Games Epic ACW figures. 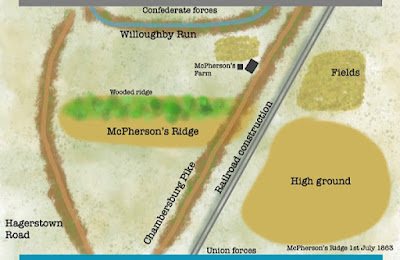 Above - the new map for inclusion with the rules.

The Union have an artillery battery (Calef) amongst the trees on McPherson’s Ridge. If they are forced to withdraw, they will not be able to re-enter the woodland (classed difficult terrain).

The Confederates have off board artillery (Pegram) that can fire onto the table at long range and typically the game will open with the two artillery batteries duelling!

The Confederates start off table and will advance onto Willoughby Run. When a unit enters the waterway, it must halt and test for Disorder. Any charge into or out from the Run will cause the attacker to lose an attack die.

The cavalry set up anywhere in front of the ridge and wherever they start, the unit is counted as being in cover. This is their ambush position. Once they move or otherwise abandon the position, that cover is removed from play. 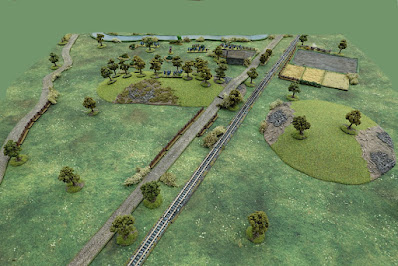 Above - the view from the Union side. Willoughby Run is in the far distance. The cavalry are in place, as is Calef’s artillery.

The game opens with a long range artillery duel. Pegram's battery takes a hit, but passes it’s Capability Test. The return fire hits Calef, who fail the test and they are forced to hook up and withdraw out of the woods and over the ridge. In this instant, the Union have for the moment at least, lost their artillery support and the dismounted cavalrymen must face the onslaught of Archer’s brigade alone. 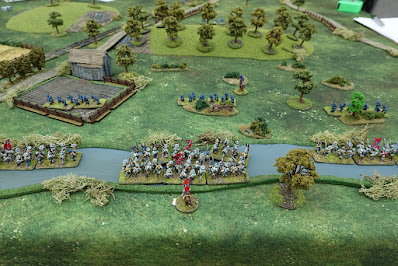 Above - Archer attacks along the length of Willoughby Run, with their centre strengthened by being two regiments deep. The cavalry fire from the dismounted troopers is (unusually) very effective, causing casualties along the Confederate front and pushing their left wing (7th Tennessee) back across the far bank. 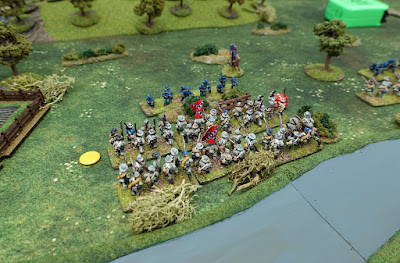 Even so, the rest of the Confederate line is determined to clear the cavalry at bayonet point rather than getting into a firing match. But, the Confederate centre fall back under weight of defending fire, though on their right they do manage to make contact with the cavalrymen (8th Illinois), it is however a short lived affair, before they too are forced back to the water.

The Confederate brigade is in a bit of a mess. It is disordered, back in the water and 1st Tennessee in the centre is so badly shot up, that 13th / 15th Alabama to their rear, move on up through them to take up the front line position. 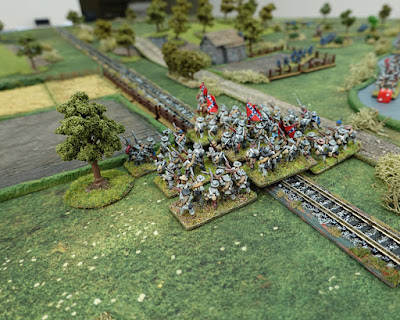 Above - as we enter turn 3, Davis' Brigade enters the map along the rail works on Archer's left. Usually in the game, this now gives the Confederates 7 regiments to press on and start taking objectives, but Archer is so badly mauled at Willoughby Run, that it is as much as Archer can do to manage to hold his position. 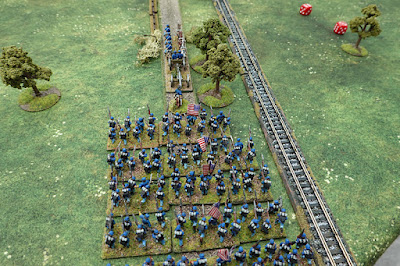 Above - turn 4. The first Union reinforcements start to arrive on Chambersburg Pike. We have Hall’s artillery leading, followed by Cutler’s 5 regiments.

Archer makes a last effort in the centre. He throws the fresh 13th / 15th Alabama forwards, but they fail their Capability Test, so only put in a Half Hearted assault. It turns into a fiasco and they fall back to the water. Archer has pretty much lost his offensive capability. 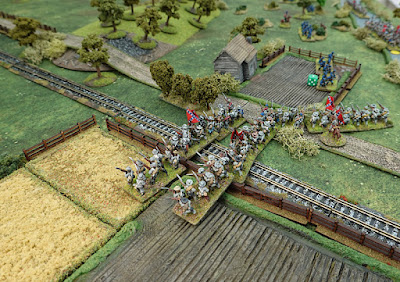 Above - to salvage the situation, Davis personally leads 2nd Mississippi towards the cavalry at the farm, while his other two regiments press on towards to rail cutting (the gap between to the two bits of high ground).

In response, Gamble’s cavalry, knowing that they have held up the enemy long enough and that help is now immediately at hand, start to retire, while Calef’s artillery re-appears on the Union far left to take up position to cover the waterway. 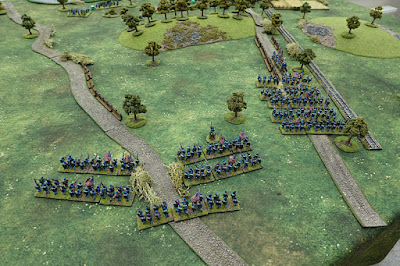 Above - Turn 5 - Now the Union’s Iron Brigade (left) under Meredith arrive and together with Cutler (right), the Union now have 10 fresh regiments marching towards the ridge.

With Archer effectively no longer in any fit shape to advance, the Union forces would simply and quickly overwhelm Davis and with this stark reality, the Confederates break contact and retire beyond Willoughby Run.

This phase of the Gettysburg battle goes to the Union, though their victory is more than just about checking the Confederate advance, they have likely put Archer out of action for the rest of the day.

Well I played just 5 out of the 12 turns, such was the extent of Archer’s defeat! I am going to have to take that as a bit of a scenario blip, which was down to the amount of damage that Archer took on the first turn from the dismounted cavalry and then failures and more damage suffered on the second turn and with units spending so much time disordered, they each lost an attack die too often, plus the cavalrymen count as being in cover for all return fire.

The Union reinforcement is substantial and the 7 Confederate regiments have much to do in the early part of the game. Typically they will often be in a position to claim all three objectives, then go onto the defence, with the Union having to fight to get two of them back.

The early displacement of Calef’s artillery gave a nice element to the narrative and as it happened, at the time, I thought as a consequence the cavalry were about to be overwhelmed early ..... what do I know!

It took Calef another 4 turns to get his artillery into a suitable firing position after they were expelled from the woods and the left flank may well have not been the best place for them to end up in anyway.

Anyway, an enjoyable exercise, as one never knows where these things can go, as proven by today. Those gamers building up their Epic forces could have a go at this while they are at the early stage of painting as it doesn't require too many bases (in fact just use the blue and grey raw plastic if you are itching for a game). I would suggest just using 2 bases per a regiment to give a frontage of 120mm and of course using ordinary infantry figures to represent the dismounted cavalry.

It should convert over to Black Powder rather easily. Keep the rule about Willoughby Run stopping movement when units enter it, just so that it holds them in place while the cavalry get a chance to have a round of fire before they are contacted.

Edit - I have just realised that the scenario booklet that comes with Epic, has a scenario for this battlefield that follows immediately after our action i.e. Archer and Davis have just fought off Gambles cavalry.

My sister webspace COMMANDERS has a small collection of shorter AAR’s. Link.