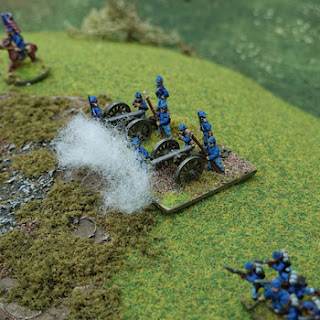 This is one of the two included scenarios in my own hex based 'Two Flags - One Nation' set of rules. It was added as an introductory type scenario, which suits today, as I am trying to do a rules edition to an open (i.e. non-hexed) table.

The table is a 4’ x 3’ and the figures are Kallistra 12mm, so has the added interest that it shows what a small game with the ‘soon to be released’ Warlord Games Epic figures might look like.

The following post examines the scenario and uses a short AAR to highlight some of the system mechanisms.

This introductory scenario has the Union holding a bridge position at Mill Creek. They have have two brigades on hand, with their artillery on the high ground behind the creek. The third brigade from their division is marching towards them, to further strengthen the position. 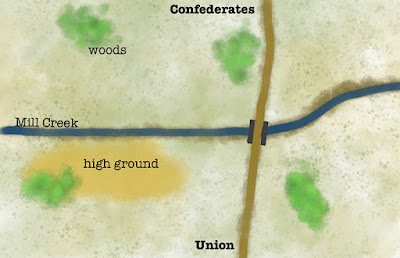 Above, the updated map graphic for the non-hexed edition.

The Confederates are already launching their attack. They have three brigades attacking across the whole front. To win an instant victory, at the end of any Union turn, the Confederates must have at least two regiments on the high ground and be the last player to control both ends of the bridge. Anything less than this will be a Union victory at the end of the scenario, which runs for 9 turns.

This is a ‘the fastest with the mostest’ type scenario.

The rulebook scenario provides the orders-of-battle. Prior to play, every regiment rolls a die to see how they are armed (smoothbore muskets or rifles). Then every brigade commander rolls to see whether they get any special attributes. The attribute chart is checked if they roll a six.

Porter (Union) rolls ‘Lucky Commander’. This means that once per game, he can force either side to re-roll any roll that pertains to his brigade.

Richardson (Union) rolls ‘Superb Tactician’, this extends his command radius from 2 hexes to 3 hexes, so in our conversion today, from 8” to 12”. This is interesting because Porter is on the left flank and his command is stretched by covering the high ground down to the bridge - now we can see that Richardson would have been better suited to this role! 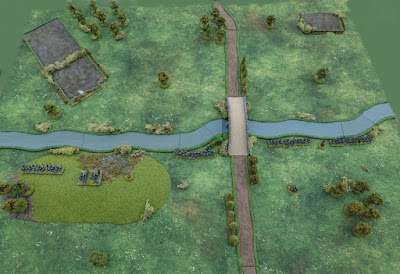 Above is our translation to a 4’ x 3’ table. The two Union brigades are shown in their starting positions.

I have put a list in the resource section as to where I have sourced my gaming materials from (all paid for by me, but I mention them simply because they are good traders). 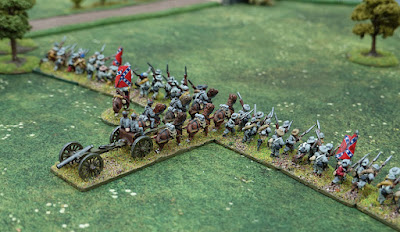 Turn 1. Above, as a wave of grey uniform enters the table, the Union can do no more than open fire with their artillery on the hill at medium range (3 - 5 hexes or 12” - 20” on our table today), getting three D6, without modifiers, looking for 5’s or 6’s to inflict ‘Heavy Casualties’.

Turn 2. The Divisional Commander is in effect just a marker representing the players direct influence on the game, that can be placed in the command phase with a unit, to help it in various ways.

Confederate Divisional Commander Elzey is placed with Courtney’s Battery because it will want to move and deploy, which requires a Capability Test. Just as well that Elzey was on hand, because without him, the battery would have failed their test!

The Union roll to see whether their reinforcement starts to enter play ...... they get lucky and 13th Illinois from the 3rd Brigade arrives on the road in column, with brigade Commander Keyes at the head, together with Schenk, the Divisional Commander. The remaining two reinforcing regiments will have to test each turn for arrival, but with increasing chances of success. 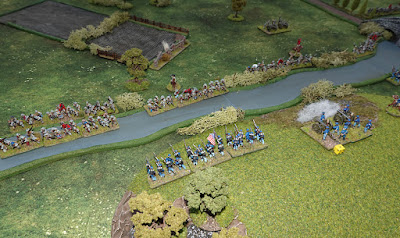 Turn 3. Above, the Confederate far right under Seibel, reach the creek. They have rolled a special event ‘Up and at them’, which would give them a charge bonus, but they are too far away from anything to charge this turn.

Those that enter the creek, must take a Capability Test and go disordered if they fail, which the 25th Virginia do!

Confederate artillery starts counter-battery fire against the Union, score a hit and so cause a capability Test to see whether the artillery withdraws - this would be very bad for the Union, as it would take their artillery out of the line as they would limber and disappear over the hill and then to return and set up would take time, this would leave a significant gap in the Union defences ...... they roll ...... they pass ..... ‘phew’ says the Union player.

The Union artillery immediately hits the approaching 25th Virginia at close range (now 5 dice) and score a devastating 4 hits. The Virginians fall back in disorder. In just a few short moments, the narrative falling out from this gun position has been critical to the Union game.

On the Confederate left, their attack has forced the defenders to fall back from the creek. The pressure is really now on for the Union ...... where are those reinforcements! 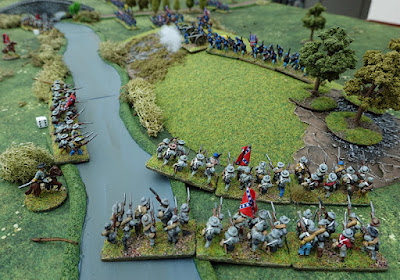 Turn 4. Above, as 52nd Virginia have 5 or more Heavy Casualty points (they have 6), they must take a retreat test in the Retreat Phase. They fail, which means they have to fall back and take another hit. remember, 8 will destroy it. This is the system showing that once morale spirals downwards, loss of spirit gathers a momentum of its own, but of course, sometimes people can surprise you!

On their far right, the Confederates have crossed the creek and started to move up the slope, trying to get close enough to charge.

Union reinforcement, 39th Illinois, arrive on the road. On the Union left, at the high ground, 14th Indiana start to fall back in the face of strong Confederate forces. 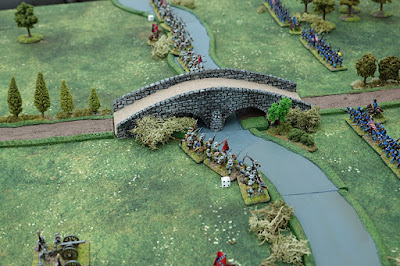 Turn 5. Above, Union artillery are suffering quite grievously from counter-battery fire, but still they hold their ground ..... indeed, Divisional Commander Schenk is with them, to make sure they do and that turns out to be a most dangerous job, he is mortally wounded and removed from play!

Confederate 52nd Virginia (centre below the hill) has to test for retreat due to the number of hits from the Union artillery, fails and skedaddles.

Union 5th Ohio arrive. All three regiments of Keyes’ brigade are now on the field, he just needs to decide which point of crisis needs him the most! 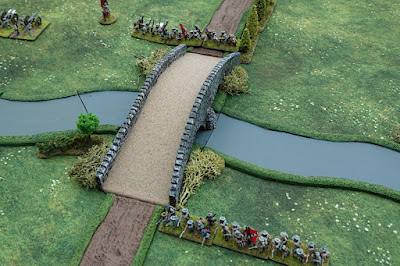 Turn 6. Above, the Confederates are coming close to an automatic victory. They already have two regiments on the high ground and are now close to controlling both ends of the bridge.

Keyes brigade is sent forwards towards the bridge, this is very tight! 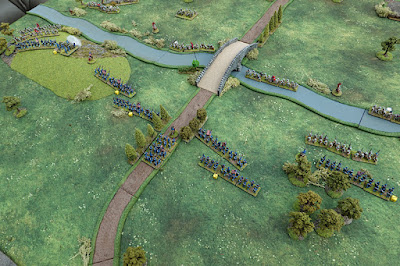 Turn 7. An event is rolled for. The Union get ‘Up and at them’, which will favourably modify one of their charge attempts, but they are not ready to charge yet.

The Union are going to have to rely on Keyes to save the day. They are falling back on both flanks and on the left, their artillery has taken 5 heavy casualty points. They limber up and pull out. Their chance of getting back into the fight looks extremely remote. 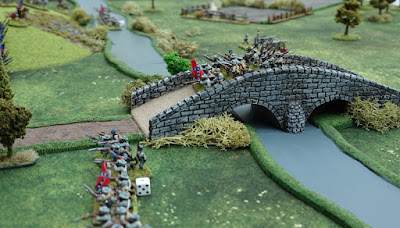 Above, Kershaw’s 44th Virginia (Confederate) are dashing over the bridge, intent on capturing the far end. They already have 4 heavy casualties, so are not in great shape. 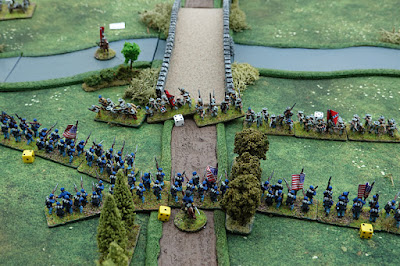 Turn 8. An Event is created. The Confederates suffer a ‘confusion’ result. Randomly one unit is selected and it will be marked out of command. The fickle finger of fate chooses Seibels 31st Virginia who are down in the creek below the hill.

Keyes’ fresh 13th Illinois counter-attack at the bridge, but they fail their pre-charge Capability Test, so will only make a ‘half hearted’ charge (losing 3 attack dice). However the Confederate defenders also fail their Capability Test, so will not be able to deliver defensive fire, their chance to push back the attacking Union has been lost - they must await the outcome of the close fighting and hope to hold out.

The attack goes in, supported by 5th Ohio. Both sides suffer 2 Heavy Casualties, but 44th Virginia are carrying the most total casualties, so they are the side that fall back in disorder. Keyes has regained the end of the bridge just in the nick of time.

With 44th Virginia repelled and carrying 6 Heavy Casualties and no other immediate reserves on hand, it is difficult to see how the Confederates can reverse things at this stage and so the game is called in the favour of the Union, a turn early.

The Confederates lost two units and suffered 35 casualty points. The Union did not lose any units, but on the left, 1st Ohio artillery and 14th Indiana are on their last legs. Likewise to the right, Richardson’s 7th Ohio are close to collapse. In total the Union have suffered 29 casualty points.

That was a very tight game and in various playings of the scenario, it has gone either way, so the balance seems about right.

The conversion of the hex based rules to the open board is running rather cleanly and smoothly. A couple of tweaks are being tested, for example, now a unit can accumulate Disorder markers. This does’t make their tests or attacks harder, but it does mean that units heavily disordered will likely take more time to sort themselves out. It didn’t really impact on the game much, but one of Porters regiments did accrue 3 Disorder markers and they were pretty messed up.

Next up on the play test schedule will be the McPherson Ridge scenario from the rulebook, which is a more complicated scenario and will likely create some more demanding situations to test that the rules remain properly functioning.

Everything in the game was bought from the following good people;