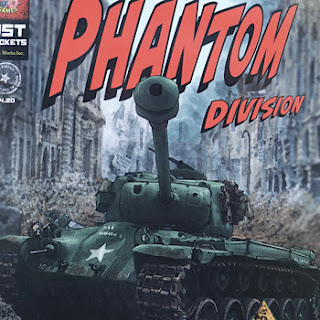 The recent release of Phantom Division from the Old School Tactical system, published by Flying Pig Games, is based around late war actions of 9th Armored and today we are looking at the ‘We Can Try’ scenario, which covers fighting near Remagen, Germany.

It is 7th March 1945. 9th Armored (Task Force Engemann)  is taking on an ad-hoc group of Volksturm and Luftwaffe units, in a scene that is a city fight, but with the Americans having to push through the town and exit the map at the other side, for the narrative goal of reaching the nearby Ludendorff Bridge.

Rather than the usual city fight, that more usually is based upon capturing buildings, here, the American force needs to exit at least 7 units in 6 turns. Even though these late war U.S. forces out-class the defenders, this is a tough scenario for them and the German player is anything but passive.

The rest of this post gives way to a brief AAR that highlights some of the action and also the very nice boardgame components that this system offers. (Note there is a link to a shorter version of the replay in the Resource Section below).

Please use the ‘read more’ tab for the rest of this post’.

The German player sets up first and their force also includes a PaK 40 Anti-Tank gun and a FlaK 30, both of which can be set-up hidden. Because I am playing this solo, I house-ruled that at the start of any German Impulse, the German side could try and bring one of the two hidden units onto an ambush position on the board, by choosing a location and scoring 2 or less on a D6 to place the unit.

This adds the surprise ambush aspect to the game, but removes all certainty of the guns being immediately available. It took repeat attempts in the game to get the guns into positions and the rule worked quite well to keep a balance to the ambush / availability aspect of the game.

The American force starts off map and it includes four half tracks and four squads, plus four tanks and an M8 armoured car.

To win, the American player must exit the far end of the map with at least 7 units by the end of 6 turns. The system always gives a 50% chance of the game being extended by 1 turn and this is tested for at the end of play. The scenarios are generally quite tight and this extra turn can mean everything. 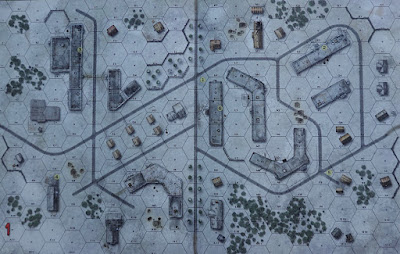 The game parts are always nice in this system and this particular map is amongst my favourites. I think it’s because it evokes a sense of Board 1 (the city board) from basic Squad Leader (Avalon Hill 1977) and a nostalgic affection that I have for that board and scenario 1, which lured, pulled and ensnared me into a life time passion for all things tactical - I doubt I am alone! 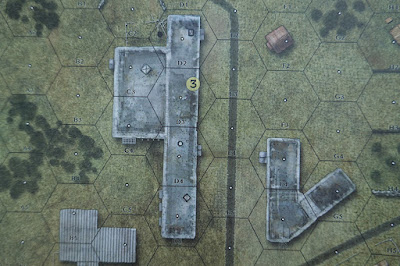 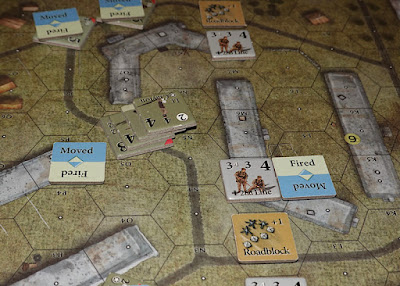 Above - The defenders show their teeth! - Lt. Clayton and his rifle squad move through a side road to enter the middle of the industrial complex. As they dismount their half track, intending to secure the building ahead, the 2nd line German unit opens fire and score 12 on the dice (best result and typically deadly), removing both squad and leader from the game! 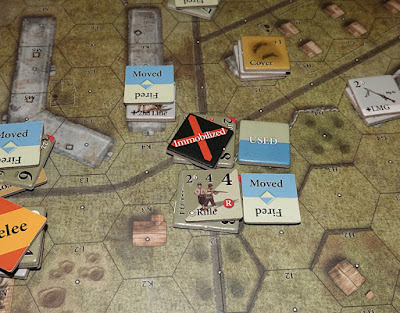 Above - The ever present danger of PanzerFausts - The M8 armoured car probes up the road, but is hit by a panzerfaust, immobilising it. This is as much as the German side needs to do as this is now one unit less that is able to exit the map.

A squad in a half track tries to dash past the M8, but takes fire from the 2nd line unit and suffers casualties (flipped squad counter), forcing the half track to leave the road and enter the orchard!

It then crosses a hedge to get around the German position, but becomes 'bogged' on the hedge embankment. It remains bogged for the rest of the game, so another vehicle is out of the race! 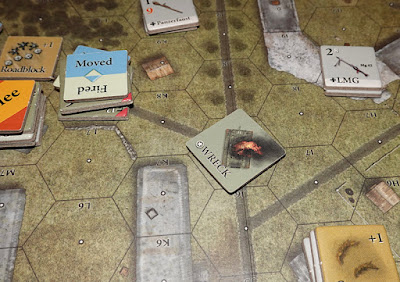 Above - Surprise attack from an Anti-Tank gun - After repeated attempts with the 'hidden house rule', the PaK 40 gets into position behind a hedge that covers the top road (off to the right side of the photograph). It fires at the Chaffee light tank, with the second round knocking it out. 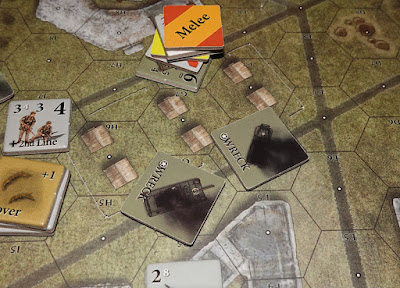 Above - The armour suffers - American armour makes a breakthrough in the centre. They are aware that time is against them and that they just need to get up the map. The PaK 40 is waiting and knocks out both the Sherman 76 and a half track.

On the other side of the huts, in the previous turn, a German rifle section had dashed out from a building and close assaulted a Sherman, making the crew go shaken and causing them to reverse out of contact). This turn the rifle section stayed in contact with the tank, assaulted it again and destroyed it.

The turn has seen a serious set back for the mobile part of the U.S. force. 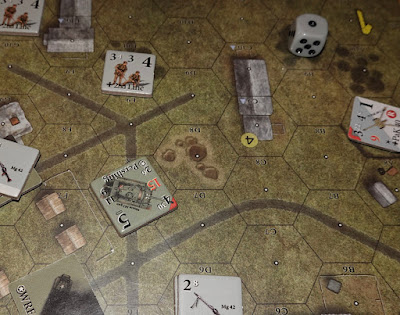 Above - The Pershing in peril - taking the lead, the Pershing advances a short distance, it is dangerous territory. A panzerfaust is nervously fired at it’s rear but misses. The Pershing has located the PaK 40 and fires High Explosive from it’s 90mm gun, inflicted casualties (flipped gun).

The PaK 40 in reply uses the last German Impulse point of the turn to fire back, but misses!

The closing minutes - By the end of the final turn, a half track has made it off the map and the Pershing and Sgt. Holland’s squad sit on the board edge. A dice is rolled to see whether a bonus turn is played (this is a system feature. In every scenario there is a 50% chance of the game being extended by 1 turn) - but, the game ends now.

It matters not anyway, the board has too many smoking wrecks and shot up squads (plus the immobolised M8 armoured car and bogged half track), the Americans simply don’t have enough units to get the 7 needed units off the map.

It seems a tough one for the American forces, but it does leave you with that puzzle of wanting to do it again to try and crack it.

Although the system is designed by Shayne Logan, this module has been designed by Mark Walker, who tends to put scenarios together that have everything thrown into the mix. The dynamic that falls out of a mix does produce wild, chaotic and intense scenarios. The slight downside for the purist is that the mix doesn’t follow platoon type structures, so here, the 5 American vehicles are all of a different type and capability, rather than say a single platoon of Shermans or Pershings etc being represented. On the German side, for this particular period, this ad-hoc collection approach does, as it happens, tend to reflect their scratch force organisations of 1945.

This package has two scenarios that just use this map and one that uses three of the maps that also looks very tempting. Surprisingly of the 6 scenarios in this ‘pocket’ set, one of them uses a big board from the core module to do a 1944 St. Vith scenario. That no doubt is going to give a very interesting game, but perhaps it should have been offered as a 7th and bonus scenario as  the whole point of the pocket battles modules is that gamers who need their games to fit into a smaller space can do that with the smaller maps.

Interestingly on these small maps, there are some buildings that are marked with identifying numbers that are not used here, but the booklet mentions them as being used for a future product called ‘Battles Generator’, so that is some interesting news and it will give these double sided maps a useful future utility.

Anyway, I like the look of the new module and the additional kit that it brings to the system’s order of battle and I am going to work my way through each of the scenarios to get the fullest appreciation of the package.

Complexity - For a tactical system, this games treads the careful path of giving a good game with all of the tactical elements without an overly complex set of rules. As with games of this type, the opportunity of repeated play makes the game much easier and slicker than it will appear to the first time user. This is my 5th outing with the system this year (as of 1st Feb), which just underlines that.

Size - This module is from their ‘Pocket Battles’ range, so the maps are 11” x 17” each, with one to three maps used for each scenario, keeping this game within the space of a 2’ x 3’ table. The box is standard ‘library’ style boxing and notably smaller than the boxes used in the core modules.

Solitaire - This is a two player system that like many boardgames, plays fine as a solitaire game, with the player managing both sides. Even when things like hidden units are involved, the sort of house rules, as I used here, can keep the tension and spirit of those aspects relevant. The too and fro of the impulse system and randomised number of impulse points available each turn, keeps this game solitaire friendly.

Time - The system as a whole has a range of scenarios that can play from 90 minutes to 5 hours and you just pick the one that suits the moment. This scenario played today on a single small map, with decent sized forces, came in at under two hours and that included me photographing and recording the game.

My sister webspace COMMANDERS has a collection of shorter AAR’s. Link.