Reinforcements for the Bosworth Project and early WWII 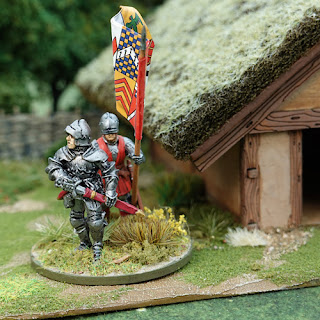 Above - Warwick. Richard Neville, 16th Earl of Warwick, who would earn the reputation of ‘Kingmaker’! He died at the Battle of Barnet in 1471 and it seems increasingly, my ‘Bosworth Project’ is becoming populated with the names and heraldry connected with the 1460 - 1471 period, rather than units being specifically built around a Bosworth (1485) order-of-battle.

Not that there is a problem with that for me. I am building two Wars of the Roses ‘pocket armies’, with generic elements, so for example the pike unit, justified as being a representation of the ‘French long spear’ at Bosworth, will see service in a range of War of the Roses disputes and battles.

Oddly, this less than strict observance of historical accuracy seems more acceptable here than it otherwise might or should …. It is rather like allowing a King Tiger tank roam the fields of 1940 France! Except the latter is a total no-no :-).

The Warwick figure is a metal Perry, the flag bearer a plastic Perry.

Having decided that 80mm bases are the way to go with this project, I am now settled with rebasing some rather fine figures (painted) that were kindly donated to me by another blogger. To make the numbers up for complete re-basing, I have added some of my own stuff as padding. 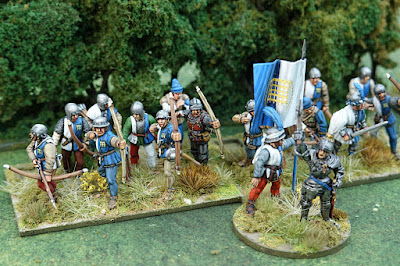 Above - Somerset and a couple of his retinue archer contingents (2 x 80mm bases). The Somerset figure is a Perry metal. He is Henry Beaufort, 3rd Duke of Somerset, who fought for the Lancastrian cause at Wakefield (1460) and Towton in (1461). 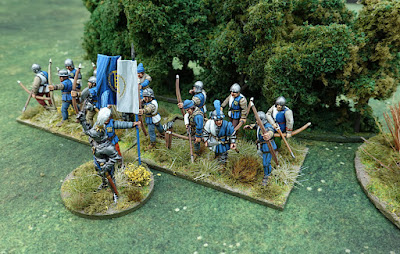 He was later captured at the battle of Hexham and beheaded ……. another leader who should not make it to the Bosworth battlefield! 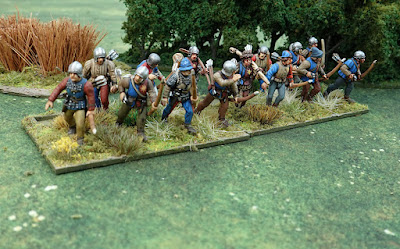 The unit is a mix of Perry plastic and metals. 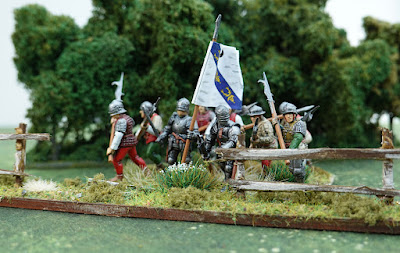 Above - and something at last that is more contemporary to the Bosworth battlefield, a contingent of billmen, carrying Sir William Stanley’s banner. They will join his red coated archers who have already passed across the painting table, to form the basis of Sir. William’s ‘ward’.

His involvement in the battle brings some interest, as he turns up with King Richard expecting (read requiring) him to be an ally, but towards the end of the battle, Sir. William puts his force behind Henry Tudor’s cause and counter-attacks Richard's charge.

It is of course more complicated than that, as the question of his allegiance and that of Sir. Thomas Stanley and Northumberland (Percy) is a fluid aspect of the Bosworth battle and something that I am looking forward to encapsulating in a Bosworth scenario. 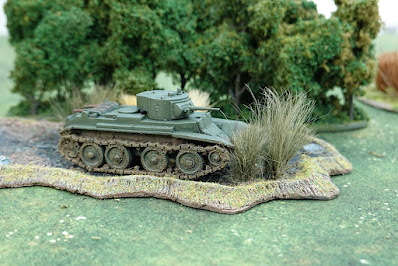 Above - also coming off the workbench this week are a couple of early war tanks, to do with a planned future blog article. The first is the highly useful Soviet BT-7 light tank, with it’s decent 45mm gun and Christie suspension.

This plastic kit is one of the ‘fast build’ range of models from Pegasus. You get two models in a box. Here, the vehicle is making a precarious advance over boggy ground. 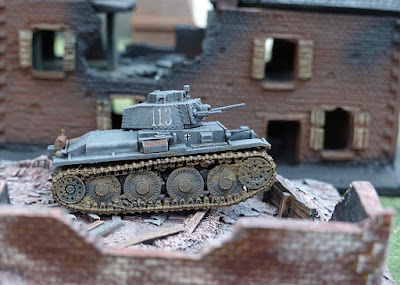 Above - the 38(t), a Czech built early war light tank that was absorbed into the German army following the Annexation of Czechoslovakia.

The chassis also saw service for the Marder series of tank destroyers and later an interesting little tank hunter - the Hetzer.

Again, the kit is one of a pair of models in the box from the Pegasus fast build range, which unfortunately do not come with decals. For the BT-7, the source material I used did not have them identified, so decals were not needed, but for the 38(t) I had to use decals from The Plastic Soldier Company range.

At the moment on painting sticks, there are a number billmen and full harnessed foot that will supplement the re-basing of the last few stands of my gifted figures, which should then produce two more bases.

One will be for York, the other Lancastrian and it is a fun part of the project to research the various leaders and their colours / banners for this historical flavour.

I am thinking of putting the Union amongst bushes and tall grasses for use on the first day of Gettysburg. The Confederates might get similar or a bit of fencing or some such.

While out at Hobby Craft (UK store) the other day, I picked up a set of 4 poplar type trees by Woodland Scenics for roadsides, a razor saw for cutting balsa wood or plastic bases and from the florist section, some of that Reindeer Moss, to place as scrub around the battlefield.

The moss was bone dry and ready to crumble, but a quick spray of water properly rejuvenated it. I have plenty of the stuff, but this is a sort of brown colour and more useful because of that.

I thought the poplar trees had a few foliage gaps, that if filled would give a better shape, so with a hot glue gun, some new bits of clump foliage (the wrong green though! the only stuff I had was mid green) were added to some of the gaps and dips.

To blend them in, an airbrush with a mid to dark green was gently passed over the whole tree and now it just needs a pass from above with a lighter green to set them off and create some under foliage shadow.

It can be quite awkward to get the colour right as the sponge like quality of clump foliage soaks up the first couple of layers of paint, so the initial results just drop back to a dark green. The third spraying with a gentle highlight should do the job ……. or make them look like something out of a Christmas Grotto!

They have been added to 40mm MDF round bases for stability. I did add a steel washer on the first one, but it made the base too thick, the MDF alone is fine.

On the way to me are a couple of 1/72 pre-painted tanks. I generally find these a bit too pristine looking, so they need 'muckying up', especially the tracks, which look too rubberised. Fortunately I seem to have a ‘mud on tracks obsession’, so that should fix it!

As for future of the three immediate ‘Pocket Armies’ projects (Wars of the Roses, ACW and WWII), I continue to debate the best way to do the Bosworth scenario and am increasingly tempted to see Northumberland’s and Sir. Thomas Stanley's behaviour on the field in part falling out from them being a counter-balance to each other and if so, this might conveniently help lay out the pre-battle positions / lines, based on their relative positions, with a little more conviction.

The ACW have the dismounted cavalry to paint and they are tempting to do sooner rather than later, because they are new and shiny, but Captain Sensible tells me that more infantry regiments should be the priority.

The WWII project in the first instance, has settled on mid war, east front 1943 actions, with the biggest job now actually being buildings rather than the fighting forces. The unpainted / unbuilt ‘pile of shame’ also has 1944 American and British forces, but they will need to take a back seat this year.

With the good weather now here, gluing kits and figures together, out in the open air (due to a sensitivity problem with the toxic fumes) in small batches of say 6 figures, to build up and provide a bank of ready units to paint in winter, needs to become part of the daily program!

Anyway, that’s it, I’m worn out now! all that modelling, I’ve used up an entire years motivation in just a few days :-)

My sister webspace COMMANDERS has a growing collection of shorter AAR’s. Link.