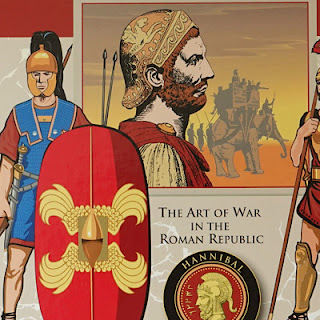 With the recent publication of the Deluxe Edition of GMT’s SPQR module, I am delving back into this game to increase my library of ‘series’ games that have core rules that can then be used across many battles.

This is a good time to return to the series as the Deluxe Edition has been much expanded to include the previous (and otherwise out of print) spin off modules such as Trebbia.

Also, the 2nd Edition of the alternative rule set ‘Simple Great Battles of History’ is currently in print, which significantly streamlines the original core rules (Note - while the main original core rules are supplied in the Deluxe Edition, the ‘simple’ rule set is a separate purchase).

I really want to put Trebbia on the table, but it makes sense to put the introductory scenario up first to get a feel of the processes and capability / relationships of various unit types. 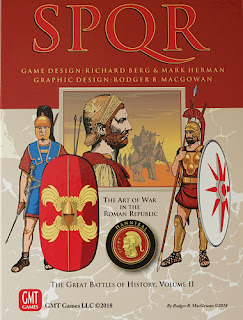 For whatever reason, Trebbia, with its surprise flank ambush, is a battle that has always intrigued me. I had the original module in the 90’s, playing it often, together with the Alexander module, under the original SPQR rules.

I also collected and gamed on the figures table with 2mm armies based on the Trebbia battle.

The original SPQR rules have more detail and depth and in those days I saw nothing onerous about the system in any way, but with the introduction of the separate ‘simple’ rules, which streamline the original processes and reduce dice rolling, this becomes more conducive to where my wargaming is today, having regard that with so many different systems in my collection, I am trying to reduce the amount of ‘in game’ rule referencing that just gets in the way of smooth play.

The original series rules are delivered in around 36 pages (though well illustrated). The ‘Simple’ version does the job in around 14 pages, perhaps bringing the system a little closer to the Men of Iron series, which I am already familiar with.

Amongst core aspects of the game are that units are rated for troop quality (TQ) and this feeds into several processes in the game, especially when units meet each other.

But in addition to that natural flow, a side has a chance to seize play from the other player and in effect give themselves a double back-to-back go.

Putting Trebbia to one side for the moment, which is a fairly large battle for a first game, we shall instead take advantage of the fictitious introductory scenario, which pits a Roman legionary force against a Carthaginian force representing around 5 - 6000 men. The scenario does have a lot of different unit types for us get to familiar with, including elephants and the phalanx.

The scenario is actually designed for the full system and surprisingly does not have conversion notes for the 'simple' system, so I have changed a few things to make it compatible (designated the formations by allocation groups of units to leaders and giving each side some seizure capability).

It is a free set-up, so there is some learning here. Hannibal is present, so we have our time frame. Accordingly, for the Romans I have the Velites up front, then a line of Hastati, followed by a line of Princepes and then finally the Triarii forming the rear line.

The cavalry are on the flanks, with the right flank getting 3 units compared to the left only getting 1.

To represent the flexibility of the legion, I have deployed with their infantry stacked in pairs (stacking is very limited in this system, but legionaries can do it), with a gap between each stack to allow for manoeuvre and bringing up reserves or deploying the stack, so that one unit slides out of the stack into the space next to them. This just allows for a wider experience of showing what the rules can do and anyway, that is how they are deployed in the Trebbia game.

The Carthaginians have two African Phalanx in their centre and then Iberian light infantry to either side, with the cavalry on the outside wings, Celts to their right and Numidians on their left.

Out in front, they have elephants and slingers. 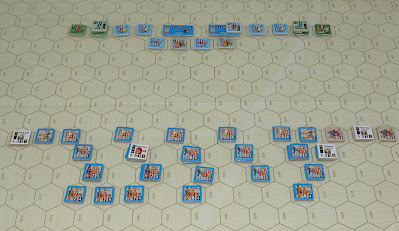 On the Roman right, their cavalry move forward to envelop the enemy flank. The Numidian (better quality) cavalry pull back to cover the flank. The Roman cavalry push on, contacting the Numidian cavalry and Iberian light infantry. Things do not go that well for the Romans, they get roughly handled by the Numdians and while they dislodge and then rout the Iberian infantry, they then get drawn in to an entangled combat in that hex.

In the centre, the Velites move forward and then do what the rules term as 'hit and run' from two hexes away, which represents them running in, throwing their javelins and then falling back. The Romans actually pick up more casualties here than the enemy, so the centre has stalled.

On the left, Scorpion artillery shoots at the Celt cavalry, causing some discomfort. 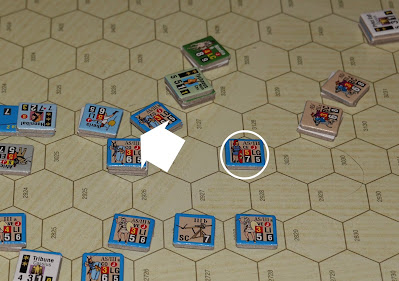 Above - the Roman commander needs to seize the moment to build on the success of the cavalry attack against the Iberians. He makes a successful 'seizure' test, allowing him to activate again (back to back activation). The Roman cavalry withdraws and the right of the legion push their infantry forwards to break into the gap caused by the routing Iberian light infantry. The unit in the circle advances to cover the gap / flank. It should have been a shattering success, but a poor die roll leaves everything engaged! 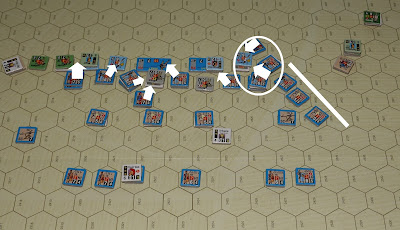 Above - with the Carthaginian line holding and the Roman cavalry on the right about to be lost, the Romans are forced to throw the entire legion forwards. When a formation is activated then units that have an enemy in their front facing are forced to attack, so this Roman assault creates some attacks that they would rather have avoided.

The Romans hope to break the enemy where the circle is (above) and then roll up the line. They throw a line of Velites out to the right to screen their efforts from the Numidian cavalry.

In the very centre, they manage to get a good attack going against an elephant unit, but are forced to also make two weak attacks on the African Phalanx.

It becomes a real tough fight, the units attacking the phalanx are lost, but the elephant unit is also lost and the Romans do manage to break into the Carthaginian line by destroying the Iberian troops.

Hannibal attempts to rescue the situation by going onto the attack. Casualties to both sides are heavy, but the deciding moment comes when a Roman unit gets behind the surviving elephant unit and removes it from play. That single loss puts Hannibal just over his army's Rout Level and they withdraw from the field, the Romans have won .... just. 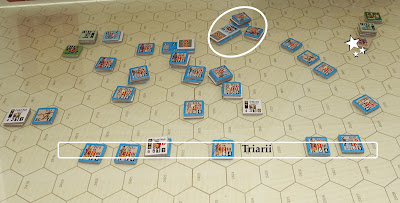 Above - Closing positions. Over on the right, the Numidians are about to attack the last Roman cavalry unit. This would almost certainly destroy them and that would take the Romans above their Rout Level, which would have cost them the game, so this battle was extremely tight, literally on the last rolls of the die

But as we survey the battlefield, we note (in the circle) that one of the African Phalanx is now flanked and there are sufficient Roman units free to mop up, so the result seems fair.

Of interest, in the bottom of the picture, I have highlighted the 6 Roman Triarii units. These were the final reserve of the army and they have some doctrinal restrictions to keep them as such, the most important here being that they cannot activate unless the enemy move within 3 hexes of them or all other legionary units are not within 6 hexes of them.

There is nothing in the above situation that would allow the Triarii to activate and so the burden of carrying on the combat would have rested with some pretty worn out (high casualties) legionaries, so perhaps taming the remnants of the Carthaginian force would not be so straight forward after all!

I really enjoyed this little action. It is almost 25 years since I last played the system (my loss) and after reading the 'simple' rules, I thought that I would miss the depth of the original rules, but as it turned out, they did a really good job.

I would like to play Trebbia with both rule sets before finally deciding, but at this point in time, the alternative 'simple' system is working for me and more than I originally thought is being actually covered by them, just in a different way - very clever.

Where I feel the system scores big is that it turns what is essentially a head-on clash into a whole series of very interesting smaller engagements. What is happening down in individual hexes become mini battles in their own right and each hex matters, winning here, losing there, advancing there, retreating here etc.

Next - a full re-read of the rules will follow to make sure that everything is better embedded and to pick up those points that I no doubt missed on the first outing and then for some serious stuff ……. The Trebbia battle.

An AAR of the Trebbia Game. LINK