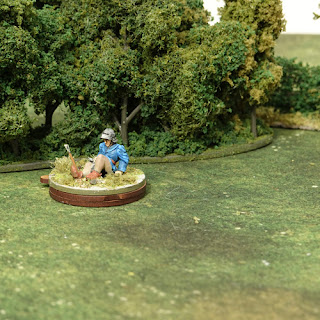 The Wars of the Roses collection continues to grow at a slow, but steady pace. Recently a fellow blogger gifted me some interesting pieces, two of which have been recruited to my most recent base.

Having to build both armies, Lancastrian and Yorkist, I have tried to balance production evenly between the two forces so that ‘balanced’ games can be played along the way while the forces grow. Most recently, Sir William Pickleton’s retinue (Yorkist) rolled off the table and before that, a retinue of Northumberland’s archers (able to represent Henry Percy, both 3rd and 4th Earl) were completed.

I would now normally flip back to a Lancastrian heavy foot base, but a couple of my gifted items (photo below) jumped the queue and one character demands a Yorkist base.

He is a beautifully painted figure of a foot knight, wearing the ‘The Sun in Splendor’ tabard, the livery of King Edward IV, hence the Yorkist aspect.

The other is a raw metal mounted herald with Buisine (long medieval trumpet) and associated draping banner, which could in fact service either side, but I like him so much, he needs to be painted and based ‘now’ and so he will of course be of Yorkist sentiment. 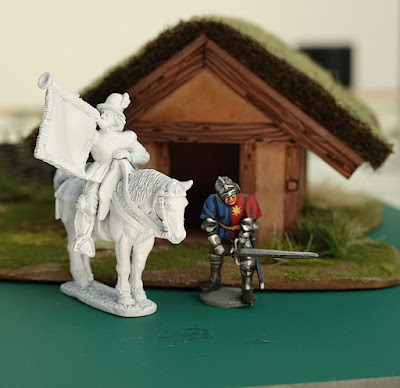 Checking my Perry flag stash, I came across a banner for Lord Cobham, so our gallant painted foot knight will take pride of place in the front rank of the base as Sir Thomas Cobham, 5th Baron Cobham.

I wanted the base to be a bit special, so this is my first foot base that also has a mounted figure amongst the foot and the herald is such a splendid figure, that Lord Cobham insisted on him joining the ranks!

He has been placed centrally due to weight of metal and with everything else being plastic, this keeps the weight distribution across the base better balanced.

Using 80mm bases, means that a horse takes up a fair bit of space, so to keep the foot figure count up, this base has not had the usual casualty die holder frame added to the rear, so that I could squeeze on an extra figure.

To make up for that, a separate casualty base has been made up using (I think) a Perry wounded figure, fixed to one of those casualty dial bases that Warbases do in MDF. An arrow shaft has been added to hint of how this man may have been hurt. 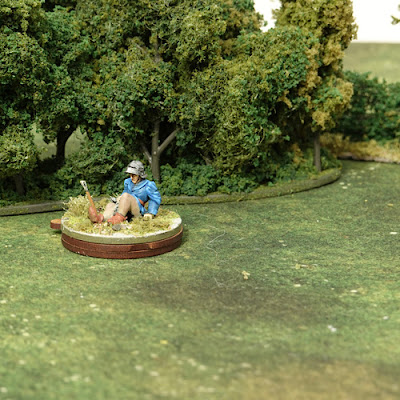 The plastics were hand brushed with black Vallejo primer and heavily dry brushed white, to keep them similar to how the rest of the army has been getting prepped, while the metal mounted herald and casualty figure were rattle can primed with white, as I prefer a stronger primer on metal and black primer seems to have disappeared from the shelves of my local retail outlets!

Everything was block painted and then washed with ‘Super Shader’ from Black Hat. I have taken to this wash recently as it tends to easily and naturally slide off the high points and settle in the low recesses, so that the shading is gentle and the total figure is not left devastatingly dirtied by the wash. This has worked well on some recent napoleonics which I have been trying to keep bright, especially the whites.

The gentle wash means that a relatively small amount of follow up highlighting is necessary, though I am finding that I am having to go in again with a soft tone wash on the skin as the Super Shader does not leave it as effectively shaded as I would want to make skin highlights show.

I normally varnish in mat, but where metals are concerned, I have found that high points of paint get rubbed off to expose bare metal. I think this is a primer issue rather than a varnish issue, never-the-less to be sure, to be sure, to be sure! I prefer putting a gloss varnish down first, which I read somewhere was tougher (is that a painting myth?),  followed by a mat varnish to kill the gloss. Finally some of the armour parts have been given a few highlights with Vallejo satin varnish.

I am still happy with the 80mm basing for units. It works well both with my table size and the Sword and Spear rules that I am currently using. The units are taking up the same footprint frontage as my 15mm units used to and though one might argue about mass effect, I have already jumped that hurdle.

A couple of weeks ago I picked up this resin bridge from Warlord Games. It costs £13.50, which I though a fair price. Anyone interested can find the item at their site by searching on ‘bridge’, they have a few to choose from.

It is a useful piece as it does the job for 28’s but has a relatively small footprint. The arch span is 90mm at ground level, the length is 160mm and the width of the roadway is roughly 60mm, but the walls pinch in at some points to reduce that ever so slightly in places, which is a shame as 60mm basing is a common size.

In the above shot, the ACW infantry are on 50mm bases and fit fine, but the 60mm based cavalry don't!

It has taken paints and a wash rather well and is going to be a versatile piece, covering plenty of periods.

Anyway - steady progress is being made and I hear there are rumblings in the Parish of Piggy Longton, something to do with the Bishop of Dungborough recruiting for The King - what could possibly go wrong there!