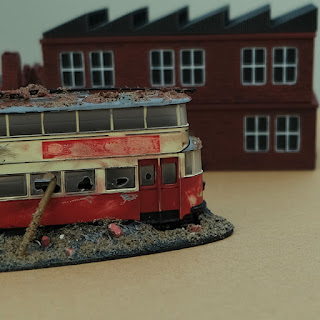 I am trying to build up some city ‘street fighting’ terrain for my WWII ‘Pocket Armies’ forces, which are being built in 1/72nd scale. The good thing about the scale is that it is close to the rail modeller’s HO/OO scale, which has a ton of rail hobby related scenery that can be put to work on the wargamer’s table.

This is a short post that discusses the build of a knocked out tram, for a fairly attractive price.

Having spotted a knocked out tram model on a recent YouTube video covering an ‘O’ Group Stalingrad game at Salute last year and seeing similar on a 15mm Stalingrad game on Storm of Steel’s video channel, it seemed like a valid and eye-catching piece of 1943 street furniture to include in some city firefight scenarios.

First stop was to check out Hatton’s (UK) model railways website to source a model tram, as they actually have a tram section and sell second hand items. 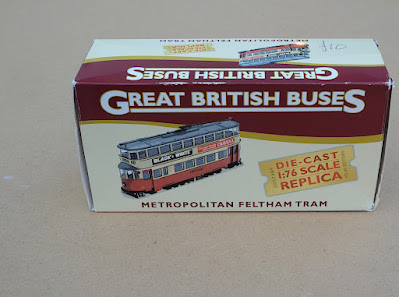 Something old, second hand, tatty and even better, broken would have been just the ticket, but the closest thing that I could find currently available was an Atlas Editions pre-owned Metroplitan Feltham Tram, in good condition at £10. When it arrived it was in fact in superb condition and a lovely model - I had a bit of a guilt trip knowing what I was about to do to it!

But from a budget perspective, the patient gamer able to wait for the right model, could probably get a damaged example for around £3 or so, e-bay is probably the place to get that. 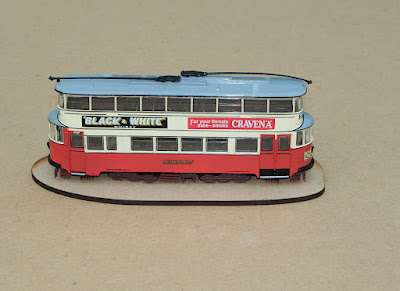 Anyway, the first job was to ‘duff it up’. The advertising signage needed to come off and some damage added. That advert for the cigs is clearly of it’s time! and the tram is likely to be used across a variety of multi-lingual settings, so the ‘English’ wording needed to go.

I used a wire brush attachment on a Dremel to scratch the bodywork and attack the signage. Those small hand held wire brushes that look like tooth brushes and a bit of fine sand paper would probably do the same job.

Some smashed windows were created with a small drill. Note, the hot drill actually starts to melt the plastic windows and the melted plastic wraps around the drill bit and sets rock hard. However, I was able to remove it with pliers little by little, but an old drill bit might be a good option, just in case.

To mount the tram, a shaped piece of MDF that I had bought as part of a pack of ‘shapes’ from Charlie Foxtrot came to the rescue. It kept the foot print small, while still taking the whole model. The tram was fixed to the base using a hot glue gun, plus a blob of ‘no more nails’ went into the centre of the base as a central anchor point - belt and braces!

To make the model look like it had building rubble falling around it, some earth mounds were built up around the bottom of the tram using kitchen tissue paper coated in PVA glue and rolled into small rough shapes and pushed up against the bottom of the vehicle, hiding most of the wheels.

Once dry, the whole base was coated with a paste to unify it and cover the tissue paper. I used Gesso paste (because for whatever reason, I have a big tub of it), with some drops of black acrylic paint to kill the severe white and mixed with a sprinkling of what I think is Chinchilla sand from the pet shop, to get a bit of texture. It doesn’t really matter what you use, filler, grout, acrylic caulk or whatever. The whole point of doing this is to save money and to just use the materials that are at hand.

This was dry within 24 hours. The base was primed with cheap black craft paint and then with a mix of white and brown paint (cheap student art tubed acrylics), layers of dry brushing went over the base to build up some highlights. 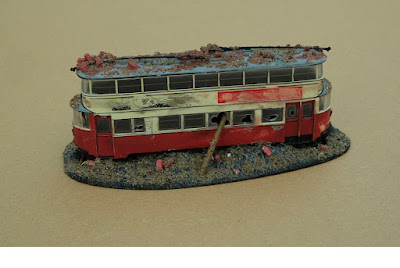 Just to hint at a sense of street furniture, a BBQ round skewer was cut down and added to make it look like a wooden pole had fallen and smashed into a window. Another piece was just allowed to lay on the floor. Cocktail sticks make good pipework if you want add exposed pipes in the ground etc. The wood was painted black and then light brown. 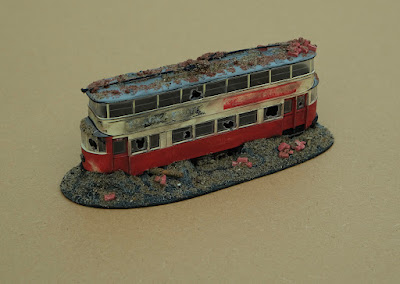 To give it a finishing touch, superglue was used to attach some bricks to the tram roof and some on the ground and then PVA was ‘splodged’ on the roof and base here and there and heavily sprinkled with course gritty sand, I used both red and brown sand for this with the excess tapped off. The bricks can be made out of anything, foam craft sheets, balsa wood, thick card or plaster.

Once dry, the model was spray mat varnished to unify it and to act as a fixative for all of the dusty sand. The mat coating does have the effect of dampening down the shiny glass effect on the windows, but I think in this instance, that is good, it helps make sense of the scratched glass and fine dust coating, that otherwise would leave them looking too clean and pristine compared to the rest of the model.

It is hard to put a final price on this because I had all of the materials needed except the model of the tram, but for a feature that has cost me £10 plus postage from Hattons’, I think it punches above its weight on looks and so it feels like a good value addition.

I ordered a couple of other small items at the same time as the tram (including model telegraph poles, which could have been used here!) and the postage (via courier) remained the same, so my total order was dearer, but more cost effective on the postage.

Anyway, wherever you are in the world, it might be worth checking out your preferred bricks and mortar or online model rail supplier, particularly if they have a second hand section, which most seem to.

We will meet our tram amidst some street action in the not too distant future, once a few more units make the perilous passage across the painting table.

My sister webspace COMMANDERS is being re-configured to showcase various figure and boardgame systems that I am enjoying and give a flavour of where current ongoing projects are up to. LINK.