Up and Onwards …. Pocket Armies. 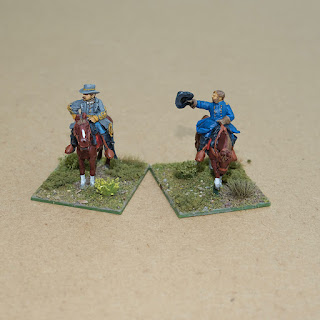 As a follow-on from the recent ‘Everything has sold' post, this is just a quick snapshot of how the Pocket Armies have progressed in the January aftermath of the sell-off.

I knew that the clear-out would allow better focus on getting remaining main projects moving forwards, but I have been surprised at the degree of productivity that has followed with those other distractions gone.

There is now a greater sense of purpose in getting things done, so I am hoping this will continue and make 2022 a good painting year.

Having made January an ACW month, the following ACW and WWII! items rolled off the painting table. The shots are a bit over exposed by flash and the digital shows detail too sharply, but on the table they 'relax' to fit in quite well.

The ‘to paint’ box has had six ACW infantry regiments sitting in it since last summer, when I took advantage of being able to glue outdoors (I don’t get on too well with the toxic glues) to create some painting stock for over winter.

One Union regiment has just been painted and based, though a Confederate regiment should be sitting next to it. There was a problem with the white primer that I put over a black primer and colours did not readily cover it properly, so the Confederates have had to go around for a second ‘touch up’, delaying them by a few days.

They are on their painting sticks waiting for a wash and then will get some highlights and get based. This bit is slow because I give the wash a day to dry, then another day for highlights and a mat varnish, then another day for attaching to bases because I use the slow drying, but non-toxic ‘no more nails’ product (which works well on an MDF base because it is porous). Then there is another day needed for the acrylic modelling compound to dry that builds up the base and then another day for flocking and dressing the base. So although it feels like the unit is nearly there, it will be another 5 days or so before these can be fit for duty (I have a teaser scenario waiting in the wings, so these will be going straight into action).

The Union are flagged from the flag sheet that came with the Perry basic starter set (Battle in a Box ACW) and flocked to fit in with the regiments already produced. The units are formed from 3 x 50mm bases for a 150mm (6”) frontage. These two additions push the ACW pocket beyond the the Perry starter armies set to now having 5 infantry regiments per side.

The mounted cavalry units from the starter set have been painted for a while, but they have been less functional without having a dismounted version of each regiment and so each side has now been given six Perry metal dismounted figures. 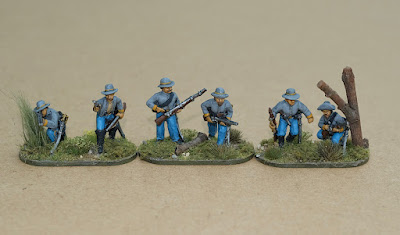 These have been based in pairs on 50mm ‘pill’ bases and to show them taking up positions in advantageous terrain, their bases have been dressed up a little and more heavily flocked and tufted than the standard units. Being metal, these have three coats of varnish, a gloss followed by satin, followed by mat, all hand brushed. Once based, they get another very light mat sprayed varnish dusting to help ‘fix’ the flock.

This Union artillery unit in metal came into the collection, because at the time of the order, the shop had made a stock mistake and so couldn't supply me the napoleonic Austrian artillery piece that I bought with them online. I like the store, so to make life easier, I just took the ACW gun piece instead. This will allow the Union pocket army to now field two pairs of guns. 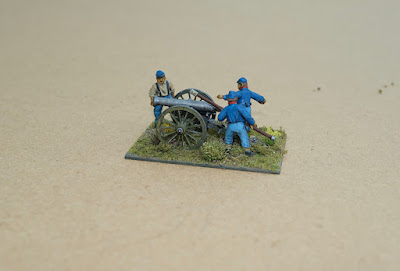 Guns are based on 50mm frontages and 70mm depth, with just three crew used, which is pretty much the smallest footprint that I can give the piece.

With five infantry regiments per side, there is now the prospect of creating two small brigades, so each side has had a metal mounted commander added, which will give each pocket army two brigade commanders. 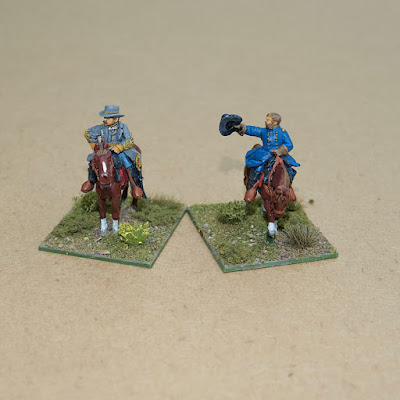 Accepting that one can never have too much snake fencing, another four sections have been added, with these each being 8” in length and matching the previous batch enough that they don’t stick out.

The balsa wood bases are just 1” wide to reduce footprint and so the fence does not ‘snake’ wildly. The fencing itself has been made from those heavy skewers that you can get for BBQ’s. The bars have been whittled away with a knife to give an impression of roughly hewn timber.

During the various prepping, priming and varnishing stages of the ACW figures, where there was some downtime while things dried / cured, some items have been done for the WWII project. 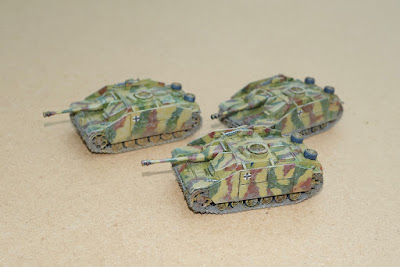 Firstly, three 1/72 StuG III’s from Plastic Soldier Company that were also glued up last summer. These have come up nicely, though perhaps suffer a bit from my mud on the tracks fetish! (they probably served at Anzio!) These are going to be real workhorses for the mid war project.

Airfix put out a number of resin building items a few years ago, which seem to be getting harder to get hold of now. This water fountain feature allows for an interesting piece without being too demanding of time or space. ‘Realistic Water’ from Woodland Scenics has been added to both the main part of the fountain and the elevated bowl. The item was mat varnished before the water effect was added. These sort of things don’t seem to stay in production for very long. I have had my copy for at least a couple of years now and it is stamped ‘Hornby Hobbies Ltd 2013’, so eight years on, if you fancy one, it may be worth hunting one down now, before they disappear altogether.

Finally, something that I have wanted to put together for ages, a plastic engine shed kit (PM112 Single Road Engine Shed) from Knightwing International. It is a simple five piece kit, plus two doors, so is an easy build (well it should have been ….. but I originally put the doors on upside down and didn’t realise until putting in the final touches, so a damaging rescue was mounted, but all is well now, with the damage mostly hidden!) 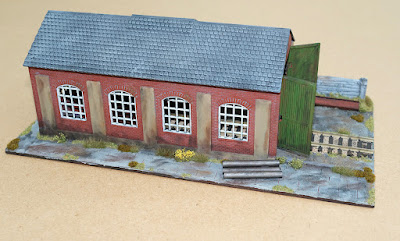 There were two elements to this. The first is obviously just the build and then priming / painting it. The interior to the windows are raised slightly away from the frame, so I decided not to attempt glazing. Being plastic and being open at one end, the structure was strengthened internally with some small wooden blocks hot glued into corners and hot glue was added to various joints. The internals were sprayed with red oxide primer, because I don’t like it and am trying to get rid of it, while outside was spray primed grey to help with mortar joints for the brickwork.

The windows were done with Vallejo Ivory, just to avoid using a harsh white. 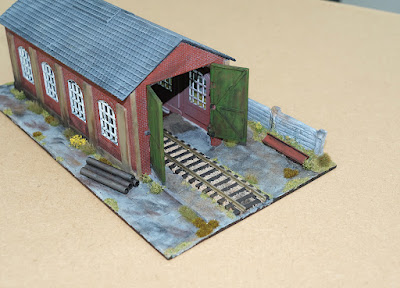 For stage two, this has to match my yet to be built HO/OO rail line, which will be laid on a balsa wood base, so the engine shed needed to be mounted on a board that was the same thickness as the track balsa base and a track needed to run out from the engine shed to the edge of the base, to marry up with any rail track used in a game.

The track was partly hot glued down and then some Woodland Scenics ballast dumped on it and then brushed off gently with a wide brush, so that the ballast just remained between the track sleepers. Using a pipette, a very watery mix of PVA was gently dropped onto the ballast, to set it in place. Once dry it got two more repeat coatings. 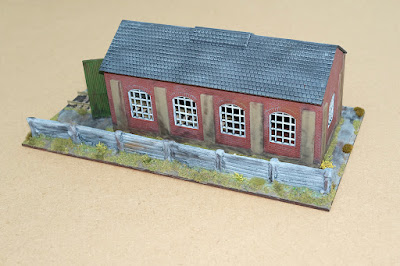 As a final touch and to help with a backdrop, some walling (from Javis I think) was added, together with some ground texture, including cardboard flag stones, which the photographs don't pick up , I think the flash blew them out. From the ‘bits & bobs’ box, a stack of pipes and a section of iron girder completed the dressing.

There are some lovely pre-painted resin engine sheds available, but they come at a price and I have had this one in the ‘to do’ pile for three years or so and once painted up, it doesn’t look overly plastic.

Anyway, the point is, for me at least, this is a pretty impressive level of productivity for a single month, which feels like a vindication for the hard culling that the collection has recently suffered to help focus attention on what remains. If this momentum can be kept up, then the pocket armies should start to yield some interesting games soon.

Time now to switch back to building some Wars of the Roses units as an action is scheduled for Piggy Longton as Lord Darcy, attempts to eject the Yorkists from his estates and reclaim the family home! (A link to the AAR of the last battle as to how we got here, is listed below).

As an aside, I am being plagued by a particular spammer and despite using the spam filter and contacting Google, the problem persists almost daily and so I am considering moving to moderated replies, something I would rather avoid, so will try approaching Google again to see if they can make their spam filter more effectively protect blogs.

Here is the account of the last ‘Piggy Longton’ action. The battle of Longton Fields 1471 LINK.