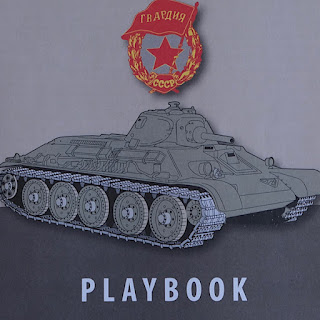 Originally published by Yaquinto Games in 1979, Panzer, designed by James Day, was refined and republished in 2012 for publication with GMT. It has recently had its third printing.

The game is a WWII design with armour as its focus. Each counter represents a single vehicle, a gun or a section of infantry. The map scale is 100 metres per hex, which gives an interesting contrast to many of the WWII tactical games that use the same unit scale, but operate at just 50 metres per hex.

Anyway, Panzer and associated modules were one of the four big WWII tactical designs that I previously collected, but sold two years ago and here we are again, going full circle, it has re-entered the collection and I am enthusiastically putting it through its paces again - starting with scenario 1 from the base game and slowly picking up and enjoying the depth of play that falls from this tank centric design.

Typically, those tactical games that play at 50 metres to the hex, have tank duels taking place at 250 to 500 metres range (5 - 10 hexes). Panzer plays at a scale that instead will typically see those ranges stretch out to 700 - 2000 metres (7 - 20 hexes) and that does bring a different emphasis to play.

I remember reading that the German Guidance manual for the JagdPanther (tank hunter) crew was that it should not to engage closer than 2000 metres. At this range the 88mm gun could easily see off enemy vehicles, while its own heavy armour would be immune to enemy fire. It’s therefore a bit of a wargaming cartoony world where we see the likes of the JagdPanther in the lower scale games fighting at 3 - 400 yards, yet we do want to see those vehicles in our games! 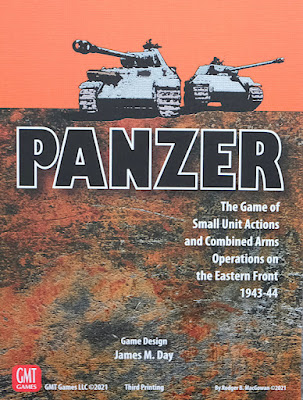 In Panzer these sort of vehicles get a better represention within the battlefield environment. The next hill or the next village / town as an objective looks right on the map for multi company actions. The maps have drawn criticism for not being the things of beauty that modern graphics can bring to the party, but I think that rather misses the point that the maps are meant to signal the significant pieces of terrain that signpost the battlefield, it forces the player to share the commanders eye as to the appreciation of relevant terrain features.

There is a little bit of old school feel to the series. Firstly the box art gives a strong nod to Avalon Hill’s very successful Panzerblitz (1972). Secondly, it is the actual reiteration of the Original Panzer game from Yaquinto in 1979 and lastly, as a fairly complicated / meaty game, it has a basic system and then you can just bolt on the various advanced rules as you get more comfortable with the game - this has a little of the feel of the way that the old basic Squad Leader (by designer John Hill) rules were drip fed to the gamer over 12 scenarios in a style that they referred to a ‘programmed learning’, something which will have remained in the psyche of many a boardgamer.

Anyway, here we are, scenario 1. It is something of a meeting engagement. Each side is approaching a river that can only be crossed at three points, two bridges and a ford. Capturing them gives victory points as does destruction of the enemy force.

The Germans are given 2 platoons, each of 5 x Pz IVg, plus one command Pz IVg.

Both forces count as seasoned and on paper, the German force is worth 736 points and the Soviet force is 693 points.

With 10 / 11 tanks per side, each player gets 6 commands (think orders) to allocate. For our first play, these will most likely be Fire, Move and Overwatch commands.

Command matters. Our forces are considered seasoned, so units of a platoon within 1 hex of each other (i.e. not a chain) can share the same order type. This tends to keep platoons working together.

Above - this is our play area, we are using the right hand ⅔ of the map. Units start at more than 2000 metres apart, so with the compulsion to capture the water crossings, both sides will initially be giving all of their units MOVE orders. There are a limited number of commands available each turn and as losses are accrued, the number of commands available diminishes.

German - The two platoons will advance, each to one bridge and engage and destroy the enemy and also capture the crossings.

Soviet. - Two of the three platoons will deploy to the top of the map, capture that bridge and destroy local enemy forces. The third platoon will deploy in the neighbourhood of the lower bridge, but they will use the defensive terrain to ambush and pin the German attempts to advance. Hoping to win on the other flank, they will fight defensively and not attempt to take their bridge .. yet!

We start the game by checking line-of-sight (so we know who can fire at who) and then commands are allocated to units and groups of units.

Once done, the sides dice for initiative. The system uses percentage dice. Who ever wins initiative chooses who will be player 1. For our turn 1, the Soviets win that roll and choose to be player 1. Note, player 1 will fire first, but move second, this matters.

This is how the turn sequence looks in our turn 1;

Second Player Fires (German) this is not simultaneous, so who gets the initiative can be important.

Above - you can see the plans take shape as the platoons move forwards into their respective spheres of influence. The players have placed their command tanks in the centre, between their respective forces.

At the top of the map, as the sides engage, the gun on the T-34 counts as firing at Long Range, but the better gun on the PzIV returns fire over the same distance (obviously!), but counts that distance as Medium Range making it easier to hit.

The problems for the T-34’s here is that (a) their chance of hitting the enemy is lower than for German return fire, due to their poorer gun counting as being at longer range and (b) though their guns at this range can penetrate the Pz IV turret, they cannot penetrate the hull armour and more of their shots are likely to hit the hull!

As it happens, they get a couple of lucky shots that hit the turrets and cause knockouts, but most shots are hitting the PzIV hull and not penetrating.

Above - the Soviets end up sending one platoon forwards to close the gap, while the other stands and continues to fire in support - though their shots continue to hit the enemy hulls without effect! Then the lead advancing Soviet tank is hit, suffers damage and tests to see whether the crew bails …. they do! That tank is now crewless and useless for the rest of the game.

Above - while guns blaze in a tank duel at the top of the map, at the lower bridge, a game of cat and mouse starts. The Soviet tanks have moved into ambush positions and taken up Overwatch orders. The German tanks cross the bridge (capturing it), but move to hug the woodland and stay out of sight. 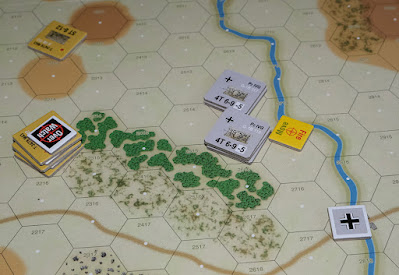 Above - the Pz IV’s start to skirt the far side of the wood, unhinging the Soviet tank platoons position (oh look! The Soviet command vehicle has come for a peek and now has 5 enemy tank barrels pointing at it!).

In response, the Soviet platoon is forced to enter the woods (there are light woods, woods and heavy woods in the game) to be ready to attack the panzers on the other side.

The German player splits the platoon, two tanks stay in the open to give fire support and the three others disappear into the woods to outflank the T-34’s.

Here we see some of the nuances in the gameplay. The Panzer IV’s in the woods will try and fall on the T-34’s flank, but will they bog down in that terrain and fail to move. The Pz IV’s in the open will attempt to engage the T-34’s which are now peeping out from the wood edge, but who will win the initiative and fire first!

Below - It is the Soviets that get to fire first. At these ranges the game is deadly. They knock out a Pz IV and damage the other, the return fire from the damaged tank knocks out a T-34. One of the Pz IV’s in the wood does in fact bog down while trying to turn, but the other two successfully move on and fall of the T-34 flank. 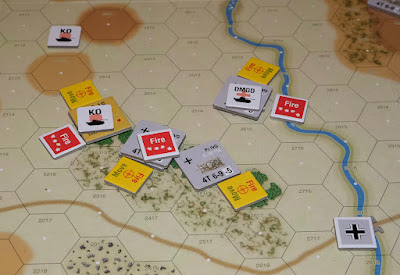 By this time, I am only halfway through the game, but the Soviet losses are just too high to continue. As a re-introduction game, it has done its job.

Bailed out tanks - 1 Soviet vehicle is vacant due to bailed crew, no German crew have bailed.

Still able to fight, there are 7 German tanks and only 3 Soviet tanks - hence the decision to stop play.

This was my second knock-about with scenario 1 and the rules were more second nature. I included some additional advanced rules and even dipped into the optional rules for the ‘bogging’ tests.

One thing does spring to mind, two posts ago I covered an easy campaigning system. This game would be a good engine for that, one because of level of play, but also tanks damaged, tracks destroyed and empty tanks from crew bailing left scattered on the battlefield, means that the victor can at least attempt to recover their vehicles and add them back into the campaign narrative.

This is a simple vehicle only scenario, but it is fine for processing the main mechanics and embedding the base rules, while along the way appreciating terrain and line of sight aspects. It does its job in getting you into the system.

There are a lot of rules in the game, giving the impression of complexity, something that can be reinforced by the look of the data cards, but the basic armour rules give a surprisingly agile system and with its focus on the tank, you do get drawn in to what needs to be done down at the hex level to keep tanks alive and to try and use the battlefield to their advantage.

There are enough turns in the scenario to allow the player to slowly develop avenues of approach and gain fields of fire for minimum exposure, it is quite intriguing, as are appreciating the differences between the design aspects of each vehicle, their strengths and weaknesses.

Anyway, I will keep bashing away at the familiarity of scenarios 1 and 2 while I get more of the advanced rules under my belt and give some further thought as whether this is the system that I would like to take into a campaign game.

As I work my way through the scenario book, I will post back on this game to comment on my experience of bringing other unit types into play, infantry, aircraft and guns.

This is a blogged tale about two tank platoons that met and fought out an engagement in the Panzer environment. It highlight the command system and ties into to the different training stories of two platoons. LINK