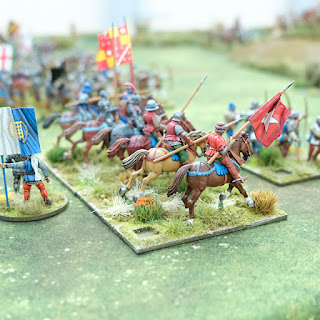 The saga of the Piggy Longton continues ….. King Henry, presently lodged at Crispin Priory, had to remind Sir Roger that he was not under house arrest and that the imperative was to reach London before the rebels could strike.

He ordered that they leave immediately and make for Oxford, where they could collect reinforcements and then continue on to London.

Sir Roger, was of course duty bound to obey his King and he knew that Henry was right. Help had not arrived from Lord Darcy, so something was amiss and remaining at the priory any longer would just increase the chances of detection by the Yorkist enemy. Leaving that night and travelling only at night, they arrived three days later within the protection of Oxford - not it must be said without some difficulty along the way, but that is a story for another time.

Edward, frustrated by the inability of Salisbury to deliver the King to him as he had sworn he would do, could not delay further and he ordered Salisbury to leave Dungborough and move his forces south towards Banbury, where he would meet him, together with Lord Hastings and Montagu, from where they would advance on the capital.

He ordered Lord Trebian to put a strong garrison into Piggy Longton and use that as a base to organise an intensive search for Henry’s (now abandoned) hide-away.

Somerset (4th Earl) had arrived at Lord Darcy’s camp to collect his men to march to Oxford, a staging post for the Lancastrian forces that were gathering to move onto London for the inevitable battle that would be fought there.

This left Darcy alone to attempt the recapture of Piggy Longton from the Yorkists, though as a parting gesture, Somerset had left a body of pikemen that they may “doth valorous and striketh feareth into the hearts of the foe”.

So once again, Darcy had to attack towards Crown Hill, the gateway to his estates from the west.

What Darcy didn’t yet know was that to the south, the Lancastrians had just been beaten at the Battle of Barnet, that Edward now controlled London and that King Henry was to be imprisoned in The Tower of London.

Darcy’s men were keen to avenge the taking of their homes, but they were tired from the recent fighting and weary of bearing witness to the wounds and deaths of men that were relatives, friends and neighbours.

Though seeing the splendid foreign pikemen, practicing their formidable art in the nearby fields, did put heart back into Darcy’s army and he decided that the ‘long spear’ troops would take up the centre position in his vanguard, so that they could be seen leading his force to victory …… atop Crown Hill.

The Bishop of Dungborough (known in earlier years as Stephen the Fearless), would not only inspire the army with his usual fire and brimstone sermon, but today, he would personally take the long spears to the top of Crown Hill and shatter the forces of Lord Trebian, of this he had no doubt. On the eve of battle, his aide, Friar Evian wrote ‘The brave Bishop wast w'rth a thousand and m're men on the field of hurlyburly’.

Trebian’s force by contrast was generally in good spirit. They had defeated Lord Darcy in the two most recent battles and the holding of the high ground gave them advantages. Trebian had already promised his captains parcels of Darcy land, should the Lancastrians be beaten here ‘and’ if Edward was successful in gaining the crown at London.

Trebian’s first son, Sir Percival Langley was also to be on this battlefield, holding the rearguard, in his initiation into the role of battle commander.

[Admin - as the player, I am quite excited at the prospects of this battle, as it will take the narrative in one of several directions. The outcome of the previous two battles have surprised me, so I will avoid the temptation of second guessing here! Plus, there are a good few notables on the field, will we be losing any of them?

In addition the Darcy / Trebian story is becoming quite intertwined with the fate of those armies moving on to London, as we have the making of a Tewkesbury moment (1471) likely to have have a direct impact upon the entitlement and rights of Darcy and Trebian to their estates. Edward has already signalled that if he successfully takes the crown, he will reward Trebian with Darcy land - though that was before Trebian had managed to let the King slip away, so who knows!]

At Piggy Longton, Trebian was without cavalry, as his companies of horse were scouring the countryside looking for Henry and had currently extended their search radius to 20 miles (still short of Crispin Priory), but he had retained a body of foot men-at-arms, which he kept with him as a personal bodyguard at the centre of his force. His weakness was that many of the billmen on the hill were levy.

In contrast, Darcy suffered from the fact that half of his archers were levy, though his bill were largely retinue. Keeping the centre ranked with retinue and professional soldiers, including the long spears and with the Men-at-Arms immediately to their right for support, he was determined that today, he would punch through the enemy centre and break the Yorkist force.

[toy things - Today’s game uses 28mm figures, mainly Perry Miniatures and Sword & Spear 2nd Edition rules. The river is from S&A scenics and the hill from The Tree Fellas - modified by me]. 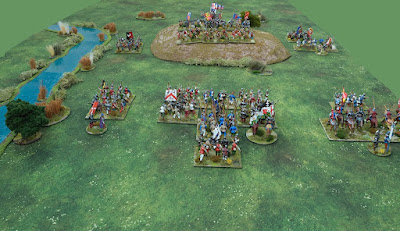 Darcy had to move up to get within bow range, advancing into a shower of arrows, but it was actually the return shooting from the Lancastrians that did the most harm and after taking too many casualties, Trebians archers retired to behind the main line.

The Yorkist bill couldn’t just stand on the hill absorbing the enemy archery, they rushed down the slopes to hit the archers, some of whom got out of the way, but in two sectors, Lancastrian archers perished in large numbers when contacted.

Lord Cobham (Yorkist) took his levy troops and ploughed right through the archer positions, bringing themselves into direct contact with Darcy’s dismounted Men-at-Arms. The difference in soldier quality was very telling and the Cobham’s levy were quickly routed from the field.

Having survived the onslaught of Yorkist billmen running downhill, Stephen the Fearless, led the long spears to the foot of the slope and then started to climb to clash with Trebian’s dismounted Men-at-Arms, the latter being roughly handled.

On the ropes, they fought back valiantly, but Stephen just continued to press the long spears onwards, taking care to keep formation on the slopes (difficult ground).

With the Yorkists suffering 5 lost units compared to the Lancastrian 2, they reached the point of having to do an army morale check (⅓ losses). This further reduced the strength of three units, but importantly, the line held.

Then …….. The Earl of Rutland’s levy billmen routed while trying to fight off Lancastrian retinue billmen. At the same time Stephen’s long spears cracked the centre, Trebians Men-at-arms fled and the rest of the army followed, abandoning the guns.

Darcy’s cavalry pursued, but were held off less than a mile away at Larkin Hill as Yorkist cavalry patrols started to return from their search for Henry.

That evening Darcy gathered his captains to discuss their next moves. It was during this meeting that word arrived with news that Lancastrian forces had been beaten at Barnet and that King Henry was captive.

There was one glimmer of hope, Queen Margaret’s army was marching towards London, intending to defeat Edward’s Yorkist army.

Everyone in the room knew that all rested on this battle. If Margaret lost, Edward would be free to seize the crown and King Henry would almost certainly be executed and with him, Lancastrian hopes would also die.

Sir Giles Staverton was the first to offer counsel. He suggested that a small force be left to defend Piggy Longton and that the bulk of Darcy’s force should make to Tewkesbury to rendezvous  with Queen Margaret.

Lord Darcy, a pragmatist, proffered that it might be best to send  just the pike mercenaries to Tewkesbury that they might rejoin Somerset for the expected fight, while Darcy’s men block / pin Trebian and prevent his force from moving on Tewkesbury.

He reasoned that his estates would not be left bare and that his absence from the Tewkesbury battlefield avoided the prospect of openly declaring against Edward, as in his view Edward was likely to win and he did not wish to find himself diminished of property and status. Up until now, his actions had always been to support the legitimate King (Henry) and he hoped that would be enough to be granted Edward’s pardon.

If Margaret won and King Henry was released, then Henry would see Darcy’s actions in blocking Trebian as legitimate support, especially in view of his recent protection given by Darcy.

There was a brief silence, a few nods and no dissenters. Margaret would get her battle and Darcy would have his!

The previous account of a battle at Crown Hill - (which will become known as 1st Battle of Corin Torr). LINK

The previous account of the Battle of Barnet. LINK

Email ThisBlogThis!Share to TwitterShare to FacebookShare to Pinterest
Labels: 1/72nd and 28mm Project, Figures Wars of the Roses, Piggy Longton