Tewkesbury 1471 and the Men of Piggy Longton 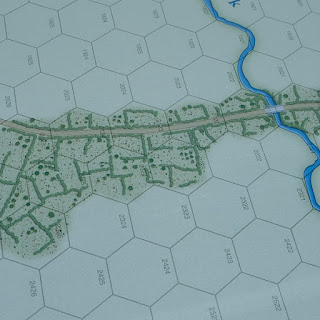 This is a post that mixes a boardgame with a figures narrative background.

For those who don’t know, I have been running a number of linked figure battles in a fictional setting called Piggy Longton. Part of the ‘imaginations’ narrative has spilled onto the national stage, as King Henry, who visited Piggy Longton, moved back down to London and immediately became embroiled with the Battle of Barnet, which the Lancastrians lost and Henry found himself a prisoner in the Tower of London.

While the smaller actions at the hamlet are played out with my figure collection, I am using my Men of Iron boardgame system from GMT to do the set piece big battles. We have already done Barnet and now the narrative at the national level is pushing us towards Tewkesbury.

Queen Margaret (Lancastrian) has gathered an army to march on London, to defeat Edward and release King Henry from captivity. The two armies clash at Tewkesbury, a critical battle that will likely decide the issue of royal dynasty and of importance to me …. who will be granted control of Lord Darcy’s estates (Piggy Longton).

Both Edward and Margaret had sent out a call to arms to their respective followers to give support and so this spills into our Piggy Longton world as we are about to witness our key land owners being drawn into the national conflict.

With Queen Margaret’s ‘invitation’ to Lord Darcy to bring his forces and Edward’s  expectation for Lord Trebian to do the same, we will see our Piggy Longton characters brought into the boardgame.

Lord Darcy will provide retinue billmen plus the renown bowmen of Piggy Longton to the Lancastrian cause. Lord Trebian will provide two contingents of bill to Edward’s Yorkist army.

If any of these four additional counters are lost in the game, a D6 will be rolled per loss and on a score of ‘1’ their respective Lord (either Darcy or Trebian) will be killed on the field of battle!

For every melee attack and every 2 missile attacks that Darcy / Trebian troops make, they will earn their lord a glory point. At the end of play, if Edward (Yorkist) wins the battle, King Henry will be killed and Edward will become king and may choose to reward Trebian with Darcy’s lands - that will be sorted on a die roll and the player with the most glory points will favourably modify that die roll …. There is much to fight for! 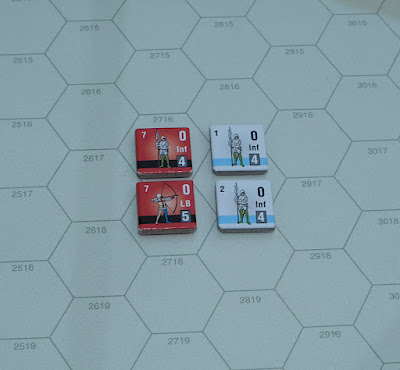 The dice are rolled and it transpires that Darcy takes position on the Lancastrian left with Devon, while Trebian stands with Hastings on the Yorkist right ….. yes, fate has put these two locally opposed neighbours facing each other - this might get personal!

There are three elements in this battle that get special coverage; 1) The Yorkist have hidden a small cavalry unit in a wooded area out on their far left - there are ambush rules that cover their arrival into the game. 2) Somerset (Lancastrian) launched a determined attack at the Yorkist left flank - to help represent this, Somerset gets a ‘momentum’ advantage to help keep up his sustained attack. 3) the terrain between the armies had extensive hedgerow and undergrowth that disrupted forces moving through them, but provided good defensive cover.

One final thing - the scenario puts a time restriction / penalty on the Yorkist player, intended to ensure that the historical attacker (Yorkists) gets a move on and engages the enemy. Each time the Lancastrians Pass on their first activation, that timer ticks away. 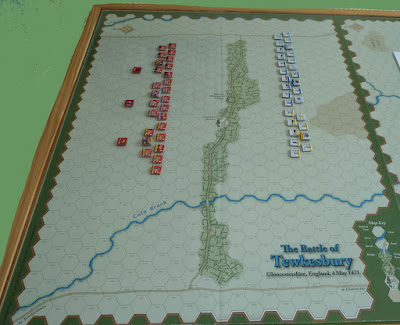 Above - starting positions. Lancastrians are the red counters. Edward is in the centre of the Yorkist line. 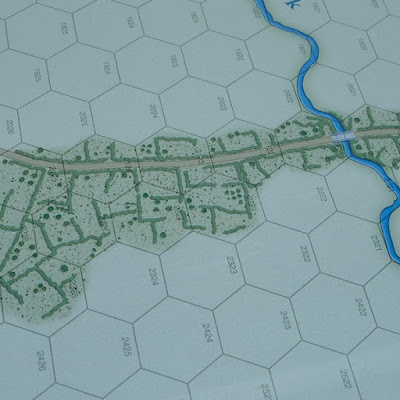 Above - difficult terrain to move through, but it does give defensive cover.

The initial thought for the Lancastrian player is to sit in their hands. The timed aspect of the game will compel the Yorkists to have to attack them and make them move though the difficult and disruptive terrain that lines the lateral lane.

One of the genuine quirks of todays set-up is that the dice have placed Darcy on the far Lancastrian left and Trebian on the far Yorkist right. Further dice rolls for positioning amazingly have them directly facing each other!

Edward orders his army forwards. He uses the ‘Army Command’, so that everything can advance at once, rather than the usual ‘hope and pray’ activation and momentum system for dealing with individual formations. 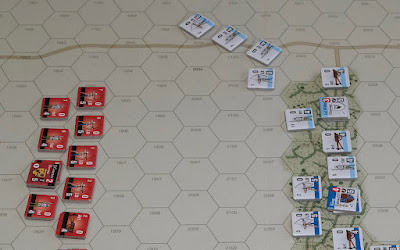 Above - On the Yorkist right, Trebian’s forces move out to circumvent the difficult terrain and bring themselves to threaten the Lancastrian left. Suddenly things are now moving too quickly for the Lancastrians to simply ‘pass’ each phase to move the timer down. 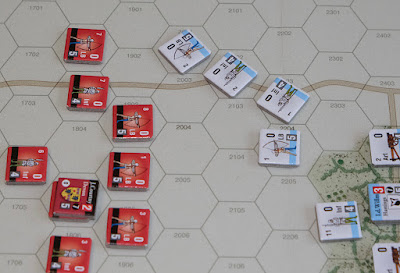 Above - Devon reacts by ordering Darcy to move out and extend the left wing, but their archery is poor and they do nothing to disrupt Trebian’s manoeuvring and his billmen crash into the Lancastrians. The archers of Piggy Longton are sent fleeing towards their battle’s standard. What a great opening!

Somerset on the Lancastrian right attacks Gloucester, hoping to get a flanking advantage, but despite heavily disordering Gloucester, the attack fizzles out too early. Worse, the cavalry ambush that Gloucester had hidden amongst some woods comes into play and it hits Somerset’s archers in the rear.

Gloucester goes onto the counter-attack and in short order, Somerset is killed and his forces crushed, they flee the battlefield, but the charismatic and disciplined Gloucester holds his battle together and they don’t pursue.

This total collapse of the Lancastrian right looks even more perilous when their left is assaulted by Hastings and they lose their dismounted Men-at-Arms unit and Devon is killed. For a moment the writing is on the wall, both Lancastrian flanks are compromised, should they escape now, while they can?

But then a pivotal moment. The Lancastrian left forcibly counter-attack and push Hastings all the way back to his standard. This briefly exposes Edward who is in the Yorkist centre, to both frontal and flank pressure.

It really is a case of whoever can activate first and the most often will seize the moment. The Lancastrians win a number of successive activations, while the Yorkists don’t, so they are limited to just trying to manoeuvre Edward, to keep his flanks secure. This keeps Hastings frustratingly inactive, standing on the sideline, unable to interfere. 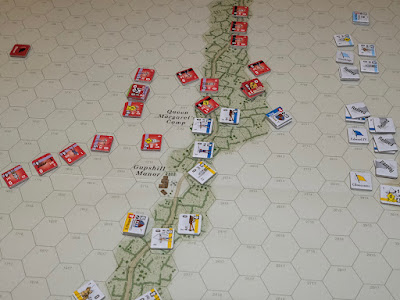 Above - The Lancastrian centre (under Wenlock) and the left wing, pile the pressure on to Edward’s battle, which eventually breaks and flees. Wenlock is killed in the action, but Edward survives and safely leaves the battlefield.

The game has a Flight Track, where casualties are recorded. Once the level of casualties reaches the figure set by the scenario, that side loses. To make this more dynamic, whenever flight is tested a D10 is added to current casualty level, so there is game tension in these rolls once you get within 10 points of army collapse …. you may or may not collapse!

Although the situation at the moment on the map looks to decidedly favour the Lancastrians, the truth is that both armies have taken heavy casualties and both are within the D10 range of losing the game when testing, so it is of some satisfaction that when the test comes, it is the Yorkists who roll high enough to hit their break level and they simply lose the battle - this is a good reflection of what the tactical situation looks like on the map and feels right.

Well there was a bit of a surprise there. Partway through the game, with the Lancastrian right fleeing and their left under great pressure, with Devon killed, it looked a certainty that we were going to get a Yorkist early win, but the activation / momentum system of this game leaves plenty of room for surprise and opportunities to be both gained and lost and here, the Lancastrians managed to turn things around, helped by the inactivity of Hastings.

Well what does this mean for our imaginations campaign at Piggy Longton and for the national picture?

As to the latter, rather than the historical outcome that saw Edward the victor, the detained King Henry killed and then Edward taking the crown - instead, we can assume that Margaret’s Army will march onto London and free Henry and that Edward will continue to be at large, keeping Yorkist ambitions as a real threat …. future battles in 1472 perhaps!

As to Piggy Longton, the restoration of Henry means that Darcy does not need to worry about the loss of his estates ….. though who knows, perhaps Trebian (of West Rottingham) will! During the battle, Darcy gained the most glory points, so he will still likely have some sway with the decisions that Henry makes.

As for losses, the men of Piggy Longton (archers) did recover their nerve and return to battle, but Trebian lost one of his bill units, so no doubt in the next local engagement at Piggy Longton, Trebian will struggle to put out retinue billmen and will be relying on his levy a little more.

This game was notable by the significant number of leaders lost, but what of Darcy and Trebian? The loss of his bill unit caused Trebian to test for his own death as explained earlier - he needs to avoid a roll of ‘1’. I held my breath and rolled the dice, losing Trebian after all that I have invested in him would seem a shame …… a ‘2’ is rolled, phew!

So with both Trebian and Darcy returning to their estates and the festering relationship between Yorkist and Lancastrian still very much alive, it looks like there will be more Piggy Longton actions on the figure table in the future,

As an aside, looking at the game we have just played, that initial manoeuvre, where Trebian moves the Yorkist flank out to strike at Devon, looks like it has the potential to create a small Tewkesbury side action scenario to put up on the figures table at some future point, just for the spectacle of it.

I hope the reader has enjoyed the melding of a boardgame scenario being inter-twined with what has been going on in my imaginations campaign and the figures table. I think each gives the other greater narrative significance and strength.

For those who have never heard of the Piggy Longton Chronicles, here are two links to some earlier engagements - LINK

The Battle of Longton Fields;

Stand firm and save the treasury: