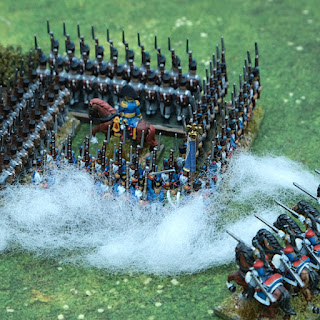 Above - an 80 man ‘Epic’ square with Warlord Games figures.

In 2015 (yes, where does the time go!) I put together a beta set of napoleonic rules and called them Eagles at Quatre Bras - for no greater reason than that was the scenario that I was working on for design testing.

Around the same time, I was developing my ACW rules, called Two Flags - One Nation, which had older origins, going back at least a decade before EaQB.

TF-ON got the attention and became more refined, whilst EaQB was largely allowed to stand still. As a consequence, not only did TF-ON and EaQB start from different design paths, but the ongoing development of TF-ON meant the designs were increasingly diverging.

I have tried a few time to bring the two rule sets back together under one umbrella, striving to get a single Horse and Musket set, to which I would also eventually like to add an American War of Independence module, to round them out.

While several mechanics could be and were brought together, I couldn’t get past the obstacle that the ACW set was designed for regiments with a turn equating to around 15 minutes of real time (i.e. divisional level), whilst the Napoleonic set were designed for brigades, with a turn representing anything up to an hour, with the goal of the medium sized battle hitting the table (i.e. corps level) - hence Quatre Bras!

I like both for their perspectives, but the only way to create a meaningful merging of the two was to break one of them. With TF-ON being the most complete and tested, I decided that it was the napoleonic set that would have to bend!

EaQB will therefore move from brigades to battalions / regiments.

I have taken the current core TF-ON rules, created a new document and am now introducing the elements of EaQB that I want to retain and losing those parts that relate specifically to ACW.

This of course creates the potential problem of having two very similar rulesets that are different enough to bring confusion.

To negate this, I am limiting rule introduction to specific rule passages that can be highlighted as being new, such as blown horses recovering after a cavalry charge and going into square now being added to the list of responses to cavalry charge etc, while all the other stuff will be dragged into the Play Aid charts, so I can largely run the game from the charts, while remembering just a few new rules. With most of the ACW text being fully preserved and compatible, it should make it easier to get either period to the table without needing full re-reads!

I will introduce two new scenarios into the set. The first will be a standard scenario with battalions, the second will practice some bath-tubbing, just to show the rules recapturing some of that ‘bigger battle’ element that EaQB has seemingly just lost.

The TF-ON rules as part of their evolutionary journey, have split into two documents, one covering hex play and the other open table play. It is the open table version that I am taking forwards for the base Horse & Musket engine.

It is of course early days. These things consume a lot of hours, so I will likely open up a tab on my Commanders website and mostly show progress over there.

I would be the last person to suggest that these are great rules or even that they bring a good representation of subject. When they were hex based, they brought some value in a figure gaming world that does not give too much support to hexes, but as an open table system, they sit amongst some excellent commercial designs, but I like them and they seemingly work to bring a fair ‘game’, plus I know them well, so they are easy to bring to the table. Considering they are just going to regulate the movement and fighting of toy soldiers - I fancy that they are good enough :-).