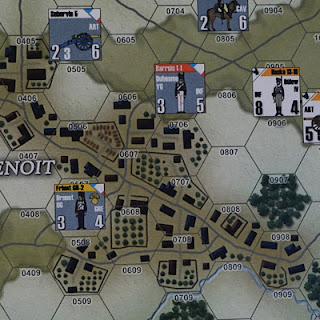 Time to put this small footprint game on the table again. ‘Crisis on the Right - Plancenoit 1815’ is published by White Dog Games.

It is 18th June 1815, Wellington is fighting a desperate battle close by on the field of Waterloo. The Prussians are making best speed to join him and have started to arrive on Napoleon’s right flank.

Napoleon needs to hold the Prussians back as long as possible while he deals a knock-out blow to the Anglo-Allies. The game map gives focus to the town of Plancenoit. The Prussians are arriving there in increasing numbers, causing Napoleon to divert much needed troops to shield his right.

This post gives a brief overview of the game. There is a moment in play that potentially looks interesting enough to create a scenario for the figures table and that is discussed. For those wanting an in depth look at the system, the Resource section at the foot of this post has a link to a previous highlighting of system and play.

Above is the map and starting positions on turn 1. The Prussians win a major victory by exiting 12 strength points off the left side of the map. Failing that, they will get points for each hex of Plancenoit captured, plus 2 Victory Points if the French are forced to release the Young Guard to fight on this wing and a further 2 Victory Points if the Old Guard are likewise released. 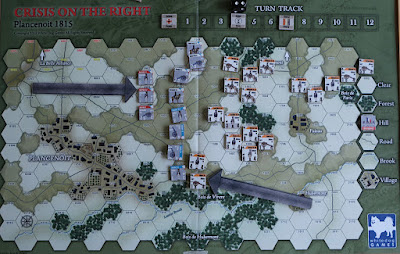 At the bottom of the map, above Bois de Virere, Hillier (orange stripe) is pressing Jeanin’s flank, looking for a way to break into Plancenoit. 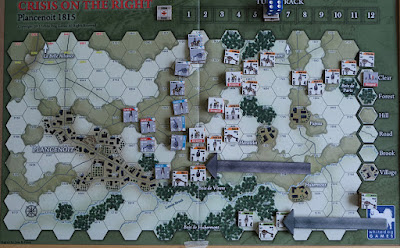 The Prussians have been struggling to get forwards because of effective French artillery constantly disordering their troops, which then have to be rallied. The French infantry in the centre are quite happy to just stand their ground.

The main Prussian activity has been at the bottom of the map, with Hillier (orange stripe) pressing on Plancenoit, while Tippleskirch (green stripe) is attempting a flank march via Bois de Hubermont. 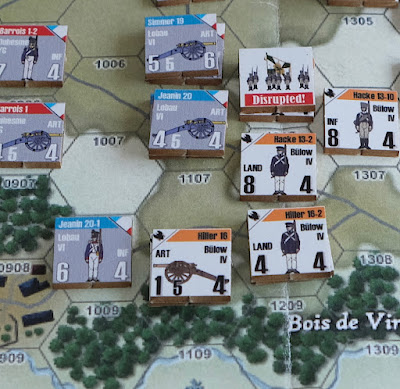 NOTE - Above is a local situation on the French centre-right that looks suitable for transfer to the figures table at some future point. I quite like this sort of thing as you get a made up scenario, but one that has a ‘feel of reality’ because it has fallen from actual game play and gives a better connection to its place in the big picture.

I will try and craft a scenario that has the possibility of the Young Guard (red stripe) intervening for the French, while Tippleskirch (green stripe) off map to bottom right, may become available to help the Prussians, which may help bring some randomness to the scenario and story telling.

It needs some research into the various orders-of-battle to break down those units a little further. The terrain for the table is going to need undulating ground and some woods. If it all works out, I will do a future post on the process and battle. 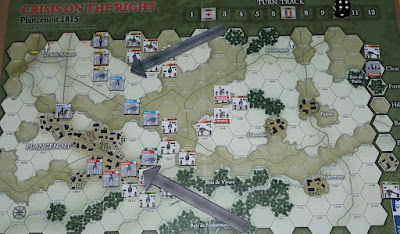 The battle starts to open up. Hillier (orange stripe) puts in an attack against Jeanin’s flank, destroying the 1st Brigade of 20th Infantry Division, but taking significant losses themselves. This creates a gap and exposes the lower end of Plancenoit, forcing the Young Guard to commit to the right flank and secure the town.

Tippleskirch (green stripe) breaks into the lower parts of Plancenoit, while at the top of the map, Rijssel breaks through and the Prussian cavalry move up to exploit the gap. This is a critical moment for the French, if the Prussian cavalry get through, they will easily be able to exit the map (meaning they will arrive on the Waterloo battlefield) with 12+ strength points and claim a major victory.

The French pull back their line to maintain a cohesive front against the Prussian advance, but this quickly comes under renewed pressure as their left collapses and the French are forced to release the Old Guard (yellow stripe), who do successfully halt the Prussian breakthrough.

The two flanks have become something of a grinding slog and a stalemate develops, so the Prussians begin to reorganise the centre (lose their disorder markers) to reinvigorate the assault there. 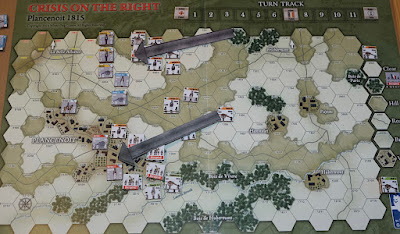 At the lower parts of Plancenoit further advance by Tippleskirch (green stripe) is held in check by the Young Guard and so it falls to Hacke / Losthin (orange stripe) in the centre to open things up again. They assault Plancenoit, putting the Young Guard under immense pressure, but they only manage to capture 1 town hex before time is called!

The Prussians have simply not taken enough ground and so strategically we can say that the French have managed to restore the right flank of the French army from Prussian threat and that Napoleon is free to concentrate his efforts on Wellington’s forces …. though with essential guard units now missing and deployed to their right against the Prussians.

Problems for the Prussians were that;

1) The French consistently got more Action Points, so could go first in each segment, giving them what we might think of as having the initiative.

2) There was a fairly high incidence of several turns ending early (die roll), so the Prussians did not get as much opportunity to develop their attack as they might have …. had they had luckier dice!

3) The French artillery was ruthless. The French typically had better artillery and more Action Points on each turn, so were generally firing first and consistently disordered the Prussian centre, who then had to spend a lot of time and effort (Action Points) trying to rally.

There was a brief moment of panic in the French lines when the Prussian cavalry broke through at the top of the map, but the deployment of the Old Guard pretty much closed that down, though it did cost the French 2 victory points to do it.

At the end of play, the Prussians had only captured 3 hexes of Plancenoit, giving them 3 VP’s, plus a further 4 VP’s due to the French releasing the Young and Old Guard divisions. So a grand total of 7 VP’s results in the Prussians claiming a Minor Loss! That is probably a fair assessment.

There are just 4 pages of rules to this game, though it does have some nuances, which meant it took a turn or two for me to get back into it (I last played in January), but the opening counter density is low, making it easier to get back into the game.

I will have a go at building up a figure game for the action by Hacke and Hillier’s brigades as mentioned above and perhaps use it to give my Eagles at Quatre Bras rules a test drive. If it works out, I will put up a post here.

As always, thanks for checking in.

A detailed look at the game system in an earlier post. LINK