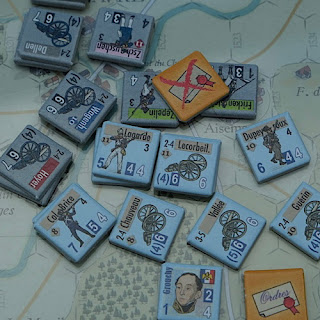 My Waterloo campaign gaming invariably takes me to the fields of Quatre Bras, Ligny and the La Haye Sainte / Hougoumont defensive line. Seldom do I seem to get the chance to visit the important action at Wavre.

Indeed, it is not since playing the old SPI Napoleon’s Last Battles quad game some decades ago, that I have moved counters across a detailed representation of that part of the battlefield.

I have recently started to acquire volumes in the Jours de Gloire boardgame series and was pleased to get the Ligny / Wavre pairing (published by Ludiofile).

Having replayed Quatre Bras in the same series a couple of days ago as a refresher to the system, today I put Wavre onto the table. Pouring over the names of towns and villages was like exploring a new piece of battlefield.

Background. The French had tactically defeated the Prussians at Ligny, but not strategically. They were able to withdraw the bulk of their army along their line of communication, which took the Prussians further away from Wellington’s position, allowing Napoleon the prospect of concentrating his forces against Wellington’s Anglo-Allied army.

To make sure that the Prussians kept on retreating, Napoleon sent Marshal Grouchy with a force of 33,000 men and 80 guns to pursue the Prussians. However, Grouchy’s advance was somewhat tardy and Blücher turned his army to cross the River Dyle at Wavre, advancing three of his four corps towards Wellington, leaving Thielmann’s Corps at Wavre to form a rearguard against Grouchy’s pursuit. The significance of this decision was critical to the outcome of the campaign as it allowed the Prussians to fall on Napoleon’s flank at the height of battle with Wellington, helping ensure a total victory for the Allies over the French.

Our package gives us two scenarios. The first covers the rearguard action by Thielmann’s Corps on the 18th June. The second starts on the 19th June after Thielmann receives reports that Napoleon has been defeated at Waterloo the previous evening and in response, he goes over onto the offensive and attacks Grouchy.

We shall be playing the first scenario. For those wanting to know a little more how this game engine works, there is a link in the resource section below to an earlier posting that explains some of this in my replay of the Quatre Bras module.

The main feature on the 59 cm x 41 cm map is the River Dyle, which is uncrossable except at bridges, two of these being at Wavre, making this location important to Blücher’s intentions and central to the story of the Anglo-Allied / Prussian co-operation that framed the campaign.

Objectives - Wavre is a 3 hex village that straddles the Dyle River. Bierges and Limale are single hex villages laying west of the Dyle. All these locations are occupied by the Prussians at the start of play. Victory points can also be earned by removing enemy units from play or causing units to rout, while still on the map.

Each hex represents 400 metres and units are typically representing brigades for the French and regiment for the Prussians (similar sized formations). There are 5 turns in the game, with each turn representing  one and a half hours and the last turn is classed as night. 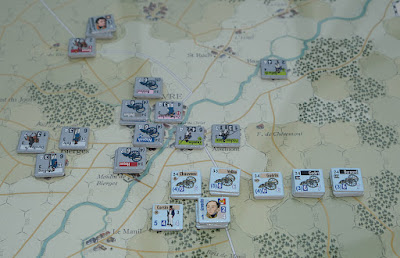 Above initial set-up. The Prussians are in and around Wavre. During play, the French will receive reinforcements from the bottom of the map (south), but they are unlikely to really arrive here in time to influence this fight, though they can attack further down the Dyle to get to Limale.

Vandamme opens with a pre-assault bombardment, but this is ineffective. Regardless and surprisingly, the initial French assault goes well, clearing the eastern side of the Dyle and at the lower bridge, Col. Brice managed to get his men across the river, bringing up Corsin to consolidate the gains.

However, as he tried to press forward against Stupagnel’s Landwehr, his attack collapsed and he was sent recoiling back across the bridge, leaving the disordered Corsin on the far side, hanging on for dear life.

At the upper bridge (Pont du Christ), 10th Division put in a strong attack, but were repulsed (really bad die roll!). The Prussians had sent several of their horse artillery batteries into the village to defend the river line and initial French enthusiasm became somewhat dampened as they encountered this stiff resistance.

Gerard, arriving as a reinforcement, started (in somewhat tardy fashion - having only one command chit) to make towards the La Morte crossing. Limale, just beyond was an objective. 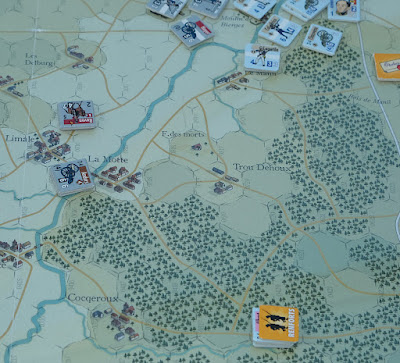 In rather short order, the French were pushed back across the Dyle and at the Pont du Christ, Prussians crossed the Dyle, taking back the eastern end of Wavre and pushing on to neighbouring Aisemont.

With much of Vandamme’s Corp disordered, they were on the brink of being dislocated back towards their starting positions!

Above - taking advantage of this French set-back, Thielmann personally intervened and pushed his troops further forwards, Grolman caught two French artillery batteries (Vallée and Lecorbeil) in the flank, destroying them.

With Vandamme in total disarray, Exelmanns’ 10th Cavalry Division provided some breathing space by dominating the open ground below Wavre. The Prussians have no real need to push beyond Wavre, but the state of the French almost invited attack.

Beckendorf (Prussian) was put to flight by the cavalry and enough of the poorer quality Prussian troops became disordered, to the point that the danger they posed to Vandamme significantly reduced, though Vandamme was in no state to launch a second attack at the village.

Whilst at Wavre, both sides had seemingly fought themselves to a stalemate, further south, Gérard, for whatever reason (failed activation rolls) had stopped just short of the La Motte crossing and remained static for several hours, perhaps he overestimated the task and was waiting for more units to arrive, but whatever the reason, it looked like he had missed the opportunity to capture Limale.

However in the closing moments of the battle Gérard launched his attack, crossing the Dyle and pushing Stengel back, who retreated onto Limale. Hulot (14th Division) made one last push against the village (below), but without success.

As the fighting died down across the battlefield, the French knew that they had failed, what they didn’t realise was just how badly! (See below).

That was a very enjoyable scenario. The cramped fighting for Wavre and its bridges brought plenty of too and fro and nuances based upon the order that units were activated and the success or otherwise of their voltiguers and artillery in causing disorder (two disorders cause a rout).

If the French can get across the bridges and thereafter not suffer the attack penalty of going over the bridge, then their troop quality compared to most of the Prussians units will give them a good chance of defeating the Prussians as they find it harder in most cases to recover their units to good order.

Unfortunately for the French, that early and very successful counter-attack from the Prussians permanently put the French on the back foot for the rest if the game.

I also rather fancy that I didn’t handle the French very imaginatively. I wasted Exlemanns cavalry and once the fight at Wavre broke down, I should have moved Grouchy (overall French commander) further south, so that he could have put those reinforcements, especially Gérard into command. Getting across the Dyle at the La Motte crossing earlier might have helped unhinge the Prussian defence.

The big cost to the French was the loss of four artillery batteries and the failure to take any of the objectives. In this system, artillery that are not stacked with infantry / cavalry, can suffer very badly in close combat. To win, a side only needs 7 more victory points than the other. In our game the French scored 5 VP’s, but the Prussians scored a very deserving 28!

My sister webspace ‘COMMANDERS’ is being re-configured to showcase various figure and boardgame systems that I am enjoying and give a flavour of where current ongoing projects are up to. Link.