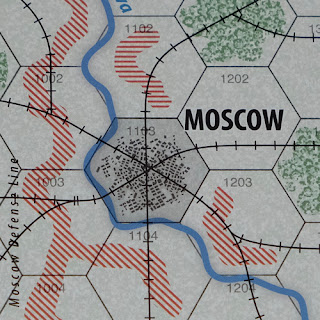 In 1986, wargaming luminary Frank Chadwick of Games Designers’ Workshop (GDW), put together a game with just 4 pages of rules that were to (a) cover the basic principles of wargaming and (b) be given away for free, to serve as an introduction for new players to the hobby. Of course this fine  game turned out to be very enjoyable for veteran gamers as well …. so here we are!

For a light touch look at a play-through of the 3Ci version (RBM Studio) of the game, please use the ‘read more’ tab.

In 2009, Victory Point Games put this game back into print as a commercial venture. I had the game and wrote up a detailed turn by turn blog post, that explains the mechanics via that play through. For those wanting more technical detail than given here today, there is a link to that post in the Resource Section below.

In 2011 RBM Studio included a copy of the game in their excellent C3i magazine and it is this version that we have on the table today.

As my purchase of new boardgames seems to reduce, I went through some of my boardgame collection yesterday, looking for those titles that I would like to play more often in our face to face games, hoping for increased familiarity with good solid designs while having reduced interference of always wanting to play the next new shiny thing that tend to shove themselves to the top of the play list.

Battle for Moscow is one such candidate and is playable in a short session, so it graces the table tonight in my face-to-face game with Mike.

The Germans from their start lines roughly along the Smolensk - Roslavl - Bryansk axis, have 7 turns (2nd October through to 1st December) to capture Moscow. For the Soviets to win, they must retain control of Moscow plus one other city. Any other result is a draw.

Above - start positions are fixed. This is the Soviet set up. All units are strength 4 infantry units (i.e. they are on their reduced side). The Germans will set up on the black crosses. They have a goodly mix of unit types and strengths and they have an opportunity to plan their deployment with a view to an early breakthrough.

There are two mud turns, which drastically slows down German progress and halves the attack value of their panzer formations. So this game has a tight schedule for the Germans if they are to reach and take the capital city by turn 7.

Initial attacks in this game are quite important. A hole needs to be blown in the Soviet line that will allow the German armour to penetrate deeply, in a way that they don’t get held up by enemy ‘sticky’ zones of control.

Wherever that main punch comes from, the German strength 12 panzer units will likely need to make some lone attacks against strength 4 units resulting in 3:1 attacks, reduced to 2:1 if there is defensible terrain. Such low odd attacks are of course hostage to the dice and will not always pay off, but with a little bit of Lady Luck on your side, it can open up the front.

The further right that the German chooses to make their initial main effort, the more open the ground and less defensible.

In our game, following the initial attack, enough of a chain of surviving Soviet units and their sticky zones of control remained, to hamper German first strike movement. Initial Soviet replacements were fed into the cities of Moscow and Tula, with other units sent to man the fortified defences immediately in front of Moscow.

The point is, by holding the Germans back lower down, they have gained an extra turn to allow for their on-board reinforcements this turn to be flipped to their full strength side (8 combat points) next turn before they get drawn into action.

Above - the two mud turns are about to start. This is a real challenge for the German side, all movement, except for Soviet rail movement, is reduced to a measly 1 hex per turn and German armour is reduced to half strength in attack.

German armour has reached Tula (right centre), but in the mud will not be strong enough to attack, while you can see that towards the left of the map, the Soviets still hold Bryansk and Orel. Also note that lone red unit on the very far left, it has managed to survive and pin 4 German units in place, who are trying to remove it and even if successful will struggle to get back up to the front line before the end of play.

Moscow still only has half strength units in the defensive belt to its front, but these will flip to full strength before the Germans reach them.

Above - the two mud turns are over and the Germans can crack on with a more meaningful assault, but of course, the Soviets have used this time to bring a lot of their defending force up to strength 8.  A reinforcing strength 10 Shock Army unit has been moved to defend Moscow itself.

The Soviets still control Orel (bottom centre) and Tula (lower right), though the German armour is gathering around Tula in some strength. Already, the Moscow defensive belt is looking quite formidable.

Above - the end of play, Tula fell, but the Soviets have put up a successful defence around Moscow that has not been penetrated, so the Germans have not won.

Have the Soviets won? Well yes, sort of. They must hold Moscow and one other city, which they do (Orel) ……. but, the holding of that second city occurred due to a player cock-up. A player is supposed to declare all attacks before any are made. You can see where some German units have been rotated to face specific target hexes to indicate attack intention and in this case, the Germans did not declare an attack against the second city.

Accepting a ‘technical’ win for the Soviets, post game we played out the attack on the second city and the Germans did indeed capture it, so in the spirit of fair wargaming, the game was considered a draw.

Overall, a very enjoyable game in which focus was on manoeuvre and objectives and notably, the rules were not referenced once.

We have played this a few times and feel that although the Germans can win, the game, for us at least, tends to have a play balance in favour of the Soviets, but this only heightens the sense of challenge and determination for the German player to get the satisfaction of a well earned win.

This game will continue to be brought to the table for re-matches particularly on those occasions that we are looking for something light and short playing. The small footprint makes it a great vacation friend!

Play concluded at a leisurely pace in around 90 minutes, leaving another hour for some chat and a discussion over another table that I had set-up with a small game of Epic Napoleonics (Warlord Games) ready for doing doing a further run of the Valour & Fortitude rules that are freely downloadable from the Perry site, though that is for another post :-)

A look at the system and AAR in the Victory Point Games version of the game. LINK

Email ThisBlogThis!Share to TwitterShare to FacebookShare to Pinterest
Labels: C3i