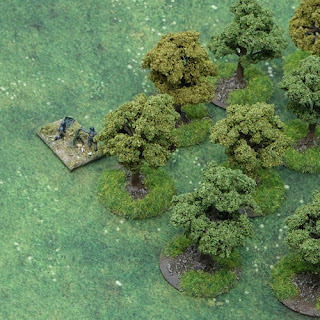 This is a quick throw down scenario on a 4’ x 3½’ table with 10 / 12mm figures, intending to test my own rules, in particular the indirect fire rules.

We again have a setting around Henri’s Farm, with its stables and workshop (these are my newly acquired Battlescale resin buildings, just rotated off the painting table yesterday) defended by a German platoon (3 rifle sections) and a medium machine gun.

To their rear in the small woods they have an 80mm mortar and to the right, a platoon of 3 panthers have just entered the scene, intending to move to the ploughed fields to dominate the open views their front!

This was coinciding with a British attack against the farm. Two infantry platoons from C Company have orders to infiltrate the woods and then assault the farm. They have a MMG for immediate support, plus a platoon of 4 Shermans (75mm) moving up the left flank for direct heavy fire support.

Both sides have one off-board artillery fire mission.

1100 hours - the assault goes in. The Panther crews can see a couple of the Sherman tanks, they fire and unbelievably both miss (rolling 10’s is an auto miss). The Shermans scurry to put the farm buildings between themselves and the Panthers and start to pump shells into the stables.

1120 hours (3 turns later) - the British infantry have got to the wood edge and their volume of fire, with Sherman support, causes 3 of the 4 German bases in the farm to become pinned.

1128 hours - the German mortar takes out the British MMG.

1140 hours - an event is rolled and the British get an air strike, which they use against the Panthers, without success. They bring down an accurate off - table artillery strike onto the stables, which is very successful, removing one infantry section and pinning another. To add to the defender woes, the Sherman’s relentless fire on the stables removes the remaining pinned German infantry section in that building from play.

A rifle section and MMG are in the workshop and their fire takes another British section, both sides now have their morale levels sitting at just 2.

1146 hours - with the stables clear, the Shermans cautiously skirt the farm to get flanking positions on the Panthers, but the Shermans go momentarily out of command (bad roll) and it gives enough time for the Panthers to respond and hit 2 Shermans. One brews, the other is stunned!

Subsequent fire from the Panthers destroy the remaining 2 Shermans and the British morale level plummets below zero, causing remaining units to test for retreat.

Enough bases fail and fall back, that the attack loses its entire momentum and at 1156 hours, the game is called.

The Germans remain in control of Henri’s farm and the British suffer a costly repulse.

Quite a fun and quick game, but I am left feeling that my ‘fix’ with the rules of having units activate by ‘group’ and the targeting of ‘groups’ by indirect fire, remains a little awkward to implement …. back to the drawing board!