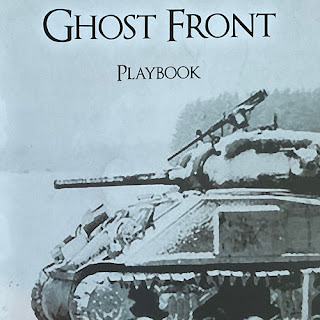 Typically in December, at some point I put out a boardgame covering the Battle of the Bulge, usually close to the battle anniversary date itself. The most memorable to date has been the playing in 2018 of ‘Bitter Woods’ from Compass games, mainly because I kept the game setup and played one daily turn (starting on 16th December) each day, to match the timetable of the real campaign, with the game lasting until 26th December. I have put a link to that post in the Resource Section below for anyone interested.

This year, I thought I might go for something a bit more tactical and so have turned to the hard to find ‘Ghost Front’ module from the Old School Tactical system, published by Flying Pig Games and designed by Shayne Logan, which covers actions from the ‘Bulge’.

Todays game puts Scenario 1 - ‘Lausdell Crossroads’ onto the table. An action that is just one example of the many important roads / junctions where small detachments of U.S. troops fought to slow down the advance of the powerful German offensive.

For the rest of this post, please use the ‘Read More’ tab.

The Scenario blurb describes things as follows; - ‘Veteran units of the 2nd Infantry Division dig in at the crossroads. They seek to blunt the German juggernaut heading towards the twin villages of Rocherath and Krinkelt. They wait as the night and fog sets in. The German commander commits the 12th SS Panzer Division, Hitlerjugend, to the fight. Panthers and Grenadiers emerge from the dark forrest to engage the GIs at their roadblock’.

The American force is infantry based. They have six rifle squads (two of them set up hidden), a couple of engineer units and a supply of wire, mines, foxholes and a roadblock. Four bazookas give this force their anti-armour capability.

The German force is slightly larger (an infantry company with tank support) and well equipped, including the presence of three Panther tanks. They are classed as an elite force. The equaliser in this scenario may simply be that this is a night action and visibility is down to 4 hexes ….. which just also happens to be the targeting range of those bazookas!

For those that don’t know the OST system, you get a large mounted map (like above), but mostly, scenarios just run on various small portions of that bigger map, which is the case here, where our battlefield is using the lower left quarter of the board (note the crossroad).

The Americans occupy the two objective hexes that are worth 3 points each to the American player and 5 to the German player. One objective is the crossroads hex and the other is the stone building a couple of hexes above the crossroads, so we can see where the focus of this firefight must fall. Casualties will also enter the Victory Point final calculation.

I am playing this solo, so need to look at a way to deal with the two hidden infantry units, plus the two mine counters which are likewise hidden. For the hidden infantry, I will take the Squad Leader approach to concealment, that is, the hidden units are visible on the map, but the attack value against those units will be halved, rounded down. Once the hidden unit fires, moves or engages in close combat, their hidden status is lost. For the 2 mines. I have listed 6 likely / suitable hexes that may have mines. When a German unit first enters such a hex a D6 is rolled. On a 1-3 the hex is mined and the mine counter is placed there, while on a 4+, there are no mines in the hex and it will not test again. Once both mine counters are ‘discovered’ the process stops.

Finally, as this is a night scenario and there is fog, it strikes me that the Germans should have limited ability to move freely from their set-up position (board edge) to reaching the objective. Therefore I will impose that German movement can only be along a road or immediately adjacent to a road (i.e. either side) until each unit is within 4 hexes (visual range) of the first enemy that they can see - the individual unit is then released from that movement restriction at that moment and is free to move anywhere. All German units are thus released on an individual basis, dependent upon when they can first see the enemy.

And so it starts. The noise of the German vehicles on the move cuts through the silence of the night, setting nerves of soldiers at both ends of the battlefield on edge. Sticking to the lane as their guide in the darkness, the attackers advanced at best speed. At the halfway point, soldiers slid off tanks and probed ahead on foot with only moonlight and shadows to both help and confuse them.

The Pioneers in the half tracks were preparing to peel off to the left once they found the extent of the enemy position, to place themselves for a flank attack, whilst the rest of Huber’s force was braced for the blunt, but pragmatic approach of a frontal assault.

One of the American rifle sections had ensconced themselves into the roadblock position (+1 to defence) and then found a good dip in the ground (+1 for additional cover). The hedges and trees to both sides of the road also helped keep them out of sight (another +1  cover benefit). From this strong position, they inflicted heavy casualties on the first German rifle section that emerged from the fog, but despite the strength of the American position, the return fire effectively raked the roadblock (double sixes - yikes!), causing heavy casualties amongst the GIs.

More shadowy men were starting to emerge from the fog, while the first couple of Panthers felt confident enough to edge forwards and bring the enemy under fire - but the GIs were intent on holding their ground rather than falling back.

A position under pressure;

As the head of the German column came within 200 metres (in visual range) of the roadblock, they fanned out left and right, looking and feeling for the flanks of the American defences.

While the American front positions took a lot of casualties and were eventually prised out of the frontline foxholes, the aggressive movement of German rifle sections fanning out also invited lots of fire and the American player was very lucky with some dice rolls, causing some heavy casualties amongst the German infantry.

Despite losses, the German assault continued and the Americans were in no doubt that their position was likely be enveloped soon. Captain Holland had his hand forced to take a calculated risk and call down a couple of artillery missions immediately to his front. Fortunately for him, the fire was accurate and did not undershoot, causing further German discomfort - and alas, for Sgt. Kisling leading the pioneers, it was the end!

The incoming barrage paralysed the German centre, as units there hugged the ground and the follow-up units moved to the left and right to avoid the persistent shelling.

To the right Sgt. Kramer fell, mortally wounded and overall, the casualties were becoming so heavy that Lieutenant Huber ordered the infantry to break off the advance and allow the tanks to move up pump H.E. Shells into the enemy strongpoints.

The crossroads are abandoned

The effect was immediately telling and American casualties became so heavy that Sgt. Joe Wishik was forced to abandon the crossroads and fall back. Captain Holland’s stone building headquarters (Objective 2) was now in the front line and he did everything he could to keep the defence together. He doubted that he could hold on much longer. The enemy tanks were staying back at around 200 metres, forcing the bazookas to ineffectively fire at extreme range, with hits unlikely.

The Germans concentrate on the 2nd Objective

With the crossroad captured, Lt. Huber with an understrength platoon built around some Pioneers, decided that they had the numbers to press the left hard, his engineers negotiate some mines (hex BB10) and together with a rifle section on the far left, he started to close assault the American final positions.

A final stand by Captain Holland

The American perimeter was significantly shrinking and the headquarters building attracted increased tank fire, coming from different directions. Captain Holland and a number of engineers were killed by one of the 75mm tank shells exploding into the building’s kitchen, just as German infantry assailed the house from all sides.

With still some ‘mopping up’ to do, the Germans had taken both objectives and while their victory was obvious, a high price had been paid in casualties, together with a delay in the divisional timetable.

I’m not generally a big fan of night actions, but this one was interesting and developed nicely. The moment that the Germans chose to switch from direct infantry assault to using the tanks to shoot up the defences was important as it started to redress the significant imbalance in casualties, giving their infantry a breather and a chance to re-organise.

The tanks chose to stay at the furtherest distance they could, while still seeing the enemy (4 hexes), which was also the maximum range of the bazookas, which then had a tough time hitting the tanks (low accuracy at that range). In fact throughout the game, they only got one hit and that glanced off the front plates of a panther tank ….. so a rethink on that one. I don’t think the Americans have enough strength to actively employ a bazooka armed tank hunter section that might operate on the flanks, but it may be the case that I could have given them a better defensive position that had more depth, gaining additional interlocking fires.

If this scenario had been part of a campaign game, the German player would have been disappointed in their level of losses here, which would certainly have had an impact later in subsequent actions.

As ever, the Old School Tactical comes up trumps again with some dynamic play and good narrative. There were plenty of small moments, not reported here, that added some twists and turns and kept things interesting for this player. The dice can bring a devastating result and of course a double six (very good) is just as likely to happen as a double one (useless) ….. but you just know that that double six will hit you at the worst possible moment!

One of the nice things about the system is that a unit can use an impulse to try and find better protection within the hex. The impulse point is paid and the die rolled. On a 5 or 6, the unit finds better cover within the hex and can gain a +1 Cover counter, that will improve their basic defence. Think of infantry creating mouse holes in walls, or finding a fallen tree to gain cover from, or perhaps finding a dip in the ground to reflect a tank finding a hull down position etc.

In the opening part of the game, the attacker will be spending impulses to move forwards, while the defender can use some of their spare capacity to search for better cover while they wait for the enemy to close.

The next scenario sees the Germans just outside the village of Krinkelt.

Replaying the Bitter Woods game to match the timetable of the real campaign. LINK.

There are quite a few OST posts on this blog, here is another scenario, located in Stalingrad and giving another perspective of the system. LINK.