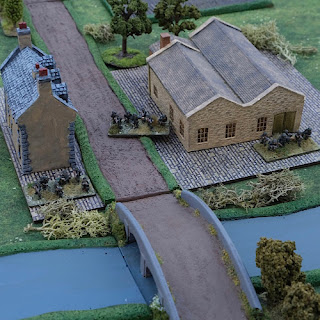 Their victory in the first game allows the Soviets to attack again, from zone 2 into zone 3 (see Resource Section below for a campaign description).

This zone is pivotal to the long term success of the campaign as it is the central zone on the ladder (5 zones) and the odd number guarantees the player controlling this zone a victory at the end of the campaign, due to their being 1 VP per zone controlled.

However, the randomly selected forces give the Soviets much concern, as they have not drawn particularly well as the attacker.

Zone 3 use scenario 23 (Defence in Depth) from the Neil Thomas One How Wargames book. It is a thought provoking scenario not least due to the terrain restrictions. The scenario itself is based upon an insurgent element being in defence and there are special rules to deal with them, but I will just be treating them as Volksgrenadiers, with a +2 to their movement dice (using the 'O' Group rules).

Further, the attackers (Soviet) are not allowed to enter woods, which will impact play because it will deny them avenues of cover for their attack or access to the central bridge.

The waterway can only be crossed by bridge and there are three of them …. but, one is covered by the woods, which the Soviets can’t enter, another is ‘guarded’ by a town and the third (on the left) is in open ground.

Since the victory points are based purely on the attackers getting three units off the table, the open ground looks a good route …. but, to the rear there is a hill that has open views to the bridge and the Germans have mortar support, plus a Panzer IVg section, a vehicle more capable than the light T-70 that the Soviet’s will be sending forwards.

Prior to setting this up, I am not confident of a victory for the attacker. This battle has good potential to cause a campaign reversal. 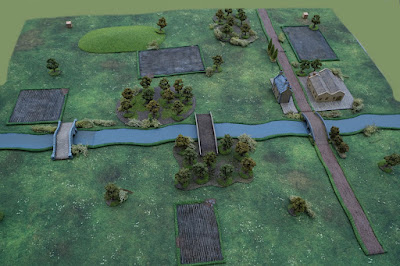 Above - the table from the Soviet perspective. Their randomly selected force gives them generous artillery support at the cost of boots on the ground. They only need to take a couple of losses and they won’t have enough units to exit the table and the little T-70 is bound to be of prime interest to the Panzer IV as easy pickings!

The table will be particularly sparse of units as the ‘O’ Group rules have 81mm mortars and above represented by off table fire.

I am already in a dilemma. Should the Soviets cover the open ground and make for the hill under the gaze of the panzers or should they fight through the town and inflict heavy losses on the German infantry as they clear a way through? I decide to take the hill route and hope that my opening artillery deals a blow to the Panzers.

On with the game - In each of the these battles, the attacker always gets a free bonus pre-game medium artillery stonk and the battalion decides it is the exposed hill that should be targeted. This matters! The Germans have placed their Panzer IV unit in hull down positions on the hill and the wrecking or otherwise of this unit has the potential to influence the game.

Opening moves - The Soviet SMG platoon attack the Volksgrenadiers in the woods. The other two infantry platoons make for the bridge. The T-70 stays in reserve (off table).

Calling in the off board mortars is expensive (2 orders initially), but the Soviets decide to call in both of their 81mm mortar platoons (4 orders) to plaster the hill. The Panzer IV platoon suffer 2 shock and decide to reverse out of view while they try to rally that off.

The Panzer platoon are having difficulty in re-ordering and their absence on the ridge encourages the Soviet infantry sections to press on and the T-70 is also sent forward.

The firefight at the woods between the 2nd Volksgrenadier platoon and the SMG platoon is fierce, but has bogged down. Eventually it looks like the Volksgrenadiers have had enough and they go suppressed. They should really have been given a ‘response withdrawal order’ to the SMG fire, but I missed the moment!

Mid game - 1st Volksgrenadier Platoon catch the flank of Soviet infantry moving up the hill at the same time that the Panzer IV section returns to a hull down position on the hill and opens fire. The lead Soviet infantry platoon is quickly suppressed.

Then an interesting moment (and highlighting a bit of the system). The T-70 takes a ‘Move and Fire’ order and slides past the side of the hill, so that it can take a flank shot against the Panzer IV. The Panzer IV spends a Reaction Order to opportunity fire at the moving T-70, it takes a test to see if it can fire NOW, it fails and so must wait until the T-70 completes its movement and fire and if it is still able to, it will then get to automatically fire.

The T-70 moves and at the end of the move, takes a flank shot at the Panzer IV (breath is held while the dice are rolled) ….. they fail to hit. The Panzer IV is now able to take its shot as the T-70 have completed their action. It is a hit, which becomes a straight Knock Out result!

The Soviets now have a problem, to win, they need to exit 3 units, they only have 3 units remaining on the board and this includes the SMG platoon, still stuck in an ongoing firefight at the woods. They will need to disengage and race for the bridge.

Fortunately for them, the Volksgrenadier platoon that they are facing are suppressed and the Soviets get the initiative, so will move first.

End game - The infantry platoon on the hill send tank hunters forward to sort out the Panzer IV, which is forced to retreat (random distance) and this takes it off the table! The way is now clear and the race is on.

Both German platoons make into the middle of the table to intercept the Soviet advance. They bring down off board mortar fire and maul the two platoons now on the hill, suppressing the lead platoon, which will need to rally before they can advance again.

“That mortar attack was a jolly jape, we should do it again” shouted Lieutenant Schmidt and he spent the required order to call in more mortar fire, but this time the accuracy was way off and the mortar bombs fell amongst the remnants of both Schmidt’s platoons!

We have reached turn 13 (out of a 15 turn scenario) and each of the three Soviet platoons are able go out of sight and run down the reverse of the hill to leave the table. The Volksgrenadiers are in a mess and unable to intervene any further. The game ends with a Soviet victory.

Conclusions - Well that ending was a real surprise, I had been fully prepared for a failed attack. With the Soviets having their mortars off board to work with the ‘O’ Group system, they really didn’t have much resilience to get three platoons off the board. This is a very small scenario for ‘O’ Group and I had considered using Rapid Fire instead, so that the mortars could stay on the table and be put into the mix for ‘three units leaving the table’.

However, the ‘O’ Group worked very well at a level it was not designed for. I like that battalion mortars need two orders to strike a new target, but subsequent fires at the same target only cost one order. Because I have reduced the command dice for these small campaign games, there were plenty of occasions in which neither side could afford the orders to bring their mortars in, which adds nicely to the decision points in the game.

The Volksgrenadiers seemed to need an inordinate amount of order support to keep rallying off their plentiful shock caused by the SMG platoon. They should have withdrawn earlier because in the scenario, the Soviets are not allowed to enter the woods, so the SMG would not have been able to follow them or access that convenient central bridge.

Once again, another clever, well thought out Neil Thomas scenario.

The Germans will have to fight hard to defeat the attack if they want a chance to counter-attack and regain the pivotal zone 3 space.

There is a link below to the previous scenario, which also explains the admin behind the ladder campaign.

The post that covers the introduction to this campaign, explaining the mechanics and covering the first battle. LINK