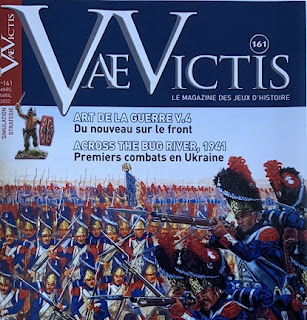 Issue 161 of Vae Victis, gives us an unusual subject, with a focus on the French Guard during the final couple of hours of battle at Waterloo. Another battle in the long standing Jours de Gloire system, we get a game that is compact and playable in 5 turns, making it an ideal vacation companion and useful for anyone with limitations on their gaming time, space or mobility.

Having recently looked at the JdG system in some depth via the Quatre Bras game, this post will limit itself to the discussion of the game play in this scenario.

Developed by Frédéric Bey, with graphics by Pascal da Silva, ‘The Guard Advances’, covers the closing stages of the battle of Waterloo in the centre between 1910 - 2030 hours (5 turns), with the Guard attacking in battalion squares.

The map is 11” x 16”, with the battlefield framed between the landmark buildings of Hougoumont, La Haye Saint and La Belle Alliance. It is a self contained game with 108 die cut counters representing the units and information markers.

The magazine and very nicely presented rulebook are in French, but as I can’t read / speak French (my loss, I know), I have downloaded the excellent English version of the scenario. The converted rules are also available for download, but as this is a series game, I already have those.

[EDIT - I am running the pages of the magazine through my iPad using the Google Translator App and it is quite readable, thank you Richard].

Conveniently, as I am in a ‘Waterloo Phase’ at the moment, both with figures and boardgames, Tim Clayton’s Account of the Waterloo battle and campaign (Waterloo - Four Days that Changed Europe’s Destiny, published by Abacus) happens to be my current read, which should give me a better appreciation of the nature of this part of the battle - though there is an article in the magazine that does that. 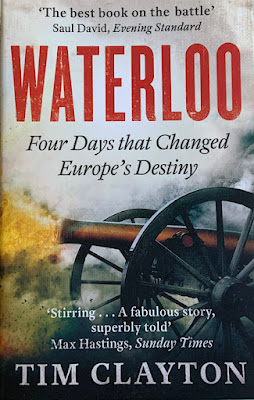 For those wanting a more in depth explanation of the Jours de Gloire system, there is more information in my last post (the battle of Quatre Bras). See the Resource section at the foot of this post for a link.

[As an aside, the counter sheet includes 1 errata counter for the 3 Days of Glory 1805 game (Austerlitz package), replacing a carabinier counter, because the icon on the counter is in 1810 rather than 1805 uniform. I am not a button counter, so would never have known, but I do appreciate the level of seriousness that stands behind the decision to do that].

There are just a few things to note about this scenario.

It uses a reduced scale of 100 metres to the hex and 20 minutes to the turn. A consequence is that artillery have a greater range in hexes.

The eleven battalions of the Guard (6 of Middle and 5 of Old Guard) are set up under ‘square’ markers, to signify that they are in battalion square …. but in this scenario, the basic square rule is modified so that they can move (reduced speed) and can shock attack. They cannot voluntarily come out of square unless disordered or routed …… or get into a breakthrough attack.

The Old Guard are not released until the Middle Guard make their first shock attack on the Allied positions.

The Allies that start on the ridge have their terrain counted as ‘difficult’ to represent the men crouching down on the reserve slope. Once the Old Guard are activated, those hexes count as being clear. I'm not entirely sure why they have chosen to do this as difficult  terrain only effects a cavalry charge and removes the positive shock modifier that could be claimed for for attacking in clear, but it doesn't seem to replicate the infantry being protected from enemy artillery.

Some of the French units have a significant reduction of Cohesion Value on their flipped side, to represent them having already had a hard days fight.

Victory points come from casualties, but if the French break the Allied centre and reach the crossroads behind their line, they get a whopping extra 7 Victory Points!

Anyway - it is time to go to the smoke filled and noisy scene of battle; 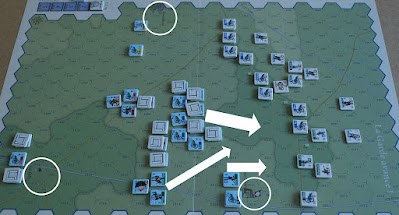 Above - This is the set up. On the right the Allies control the ridge. On the left the front group of ‘square’ markers are the five battalions of Middle Guard. Behind them, in square, the six battalions of Old Guard. The three circles indicate the farmhouses.

Ney starts by advancing the Middle Guard with a drift towards the right, to concentrate his attack on the Allied left. Donzelot also starts to move the right forwards to support the assault, but La Haye Saint is in the way (in the game it cannot be attacked, but it does have a Zone of Control), so his troops have to spend some time moving around the feature, giving it a wide berth. This leaves Schmitz to attack alone, who gets a bloodied nose and routs!

Ney gets the initiative and pushes the Guard onwards and into contact with the Allied line. It is at this point, when I lift the ‘square’ markers, that I am surprised to see the French strengths so weak (I had not checked before play!). Their cohesion is high, which helps counter that, but I should have tried a bit harder to get the attacks supported by the artillery.

The ridge bristles with Wellington’s artillery, but their shooting is spectacularly poor.

Ney’s Middle Guard have some success, but as the turn plays out, they become largely disordered, start recoiling and some rout. As Wellington goes onto the offensive, two French artillery batteries are overrun.

Wellington has engaged his reserve on his left, but is holding his cavalry back in the role of a final reserve behind the centre.

The Old Guard advance and hit the Allied centre, creating a gap and Wellington is forced to deploy his cavalry forwards to cover the breach. The fighting becomes confused as the lines mix, but essentially the Allied line manages to hold, while the French takes losses that they cannot afford.

There is something of a stalemate developing. The Allied line is stable, but the French Guard are still a threat and some fresh Guard battalions are still moving up to engage.

Once again the French get the initiative and the Old Guard are activated first to try and get some momentum going. They succeed in breaking through into the centre, but their numbers are not enough to allow them to push through to the Allied rear.

Wellington rides out to his right flank on the ridge, which unused so far, remains fresh and he orders them to swing front / left into the now stretched and open Guard flank, but as they do that, they meet two battalions of Guard that had been so far back at the start of play, that they are only just arriving in the fighting zone and Wellington’s men are roughly handled.

The lines have become heavily intertwined in the centre and 3/1st Foot Guard manage to strike 2nd Grenadiers (Old Guard) in the flank, who suffer a recoil result, but they are unable to move back due to lack of space and competing zones of control …. they are removed from play - ouch!

This gives the Allies a moment of opportunity to exploit the centre, but their cavalry are fully spent (every unit is disordered) and basically as the turn plays out, both sides have clearly fought each other to a stand-still.

Victory - Points are scored on casualties alone, since the French failed to break through to the crossroads. A side needs 7 clear points to win, anything else is a draw. With everything counted up, the French get 15 VP’s and the Allies get 19 - so it is officially a draw, which I think is a fair reflection on what the situation on the field looks like.

Well, when I started the game, probably due to the constrained space, I was feeling that there might not be much of a game in this and that a French loss (historical) was likely to be pretty much situation driven. This view was reinforced by the very high number of initial French losses.

However, once the Old Guard were released, they hit an enemy who were now already roughed up with disorders and pulled out of line due to their fighting with the Middle Guard. Suddenly, Allied casualties started to climb, closing the casualty gap.

A whole load of nuanced mini situations cropped up along the front, with each one seeming to matter.

The forces are quite small, so everything quickly gets committed and it was a lack a fresh reserve for either side that saw fighting die down to a stalemate.

It must be noted that the Allied gunnery was spectacularly ineffective in this game (bad dice), but equally, the French failed to make good use of their guns to disorder the enemy before assaulting. On another day, the Allied guns would likely be more effective, making this a much more difficult task for the French and I think accepting that, there will need to be some thought as to how best to maximise French chances in the limited time available to them.

There is a variant scenario that simply allows the French Guard to set-up without being in square and consequently being locked into that formation until disordered. That would soften the impact of the Allied guns as they approach the Allied line as the Allies could not claim the dense target modifier.

As mentioned earlier, the only design puzzle I am left with is why 'difficult' terrain was used to represent the Allied infantry crouching down on the reverse slope, as it doesn't protect them from artillery fire.

In reality that does not really seem to impact on play because fire from French guns is often either blocked by their own troops or the French artillery can't get into useful firing positions during the first two turns. Overall I feel that the scenario, with its few special rules, has really done a good job of covering the conclusion to the days fighting in this sector. For those who have umpteen games that cover the four main battles of the campaign (Ligny, Quatre Bras, Wavre and Waterloo), this game will be a welcomed addition, offering something different.

In the UK, I bought my copy from The Little Corporal, who are a Vae Victis stockist. LINK

PLEASE NOTE, AT THE MOMENT THE COMMENT SECTION HERE HAS BEEN TURNED OFF, BUT THANKS FOR VISITING THE BLOG, YOUR SUPPORT IS APPRECIATED AND I HOPE YOU ENJOYED THE ARTICLE