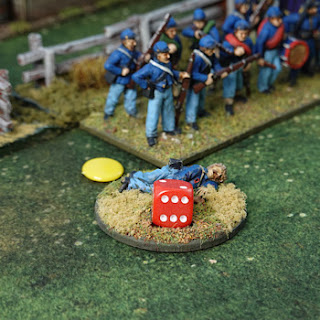 This is a very small action, ideal for the small table and a quick bit of fun. I have a super little book called ‘We Shall Meet Again’ The first battle of Manassas, by JoANNA M. McDonald and published by Oxford University Press. 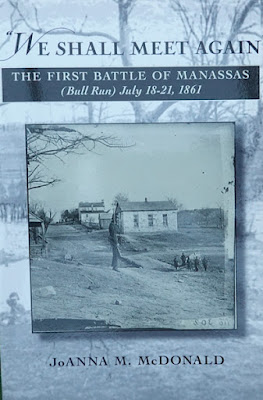 It is a wargamers delight. Each part of the battle is covered and each of those parts is broken down into stages, each stage with a map. The part that deals with the battle for Henry Hill is covered in 15 stages and this post just looks at the opening stage, with roughly a brigade per side.

Please use the ‘read more’ tab for the rest of this page.

Keyes (Union), as part of Tyler’s Division had crossed Bull Run and been ordered “to take a battery on a height in front”

Keyes had four regiments and he pushed two of them forwards against the Confederate defenders who were in the vicinity of Robinson house (5th Virginia, Hampton’s Legion and 7th Georgia).

Hampton and 7th Georgia were in danger of being surrounded and they pulled back into woods on their right.

5th Virginia stayed, but without support were forced to also pull back around 100 yards south of Robinson House, seeking cover in woodland to their rear. Here they formed up and gave devastating fire against the Union regiments, laying down intensive fire as their “muskets became hot and fouled”. 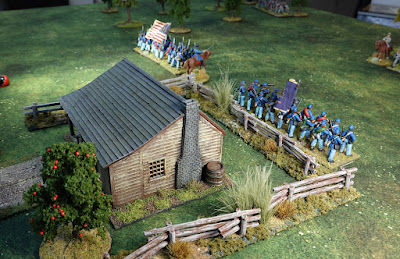 With increasing losses, Keyes chose to pull his two lead regiments back and retire the entire brigade to the other side of Young’s Branch. That ended the engagement ..... short and sharp!

For our game, we get the interesting options of what if Keyes had supported the wavering assault with his other two regiments? and for the Confederates, what if Hampton and 7th Georgia had become involved again?

Although a very small engagement, there is also a bit of fun to be had with the Black Powder unit attributes to bring some character to the game and to have a few special rules to stop the players having too much freedom with those extra units that didn’t actually become involved and due to that, together with few units in play and the impact that dice can have in a battle this small, it should give a fairly unpredictable game with several replays possible.

The plan is to do a 4’ x 3’ table with the Perry 28’s and then a 2’ x 3’ pinboard play with the Kallistra 12mm figures. Rules will be Black Powder, which some bits taken from the Glory Hallelujah ACW supplement. 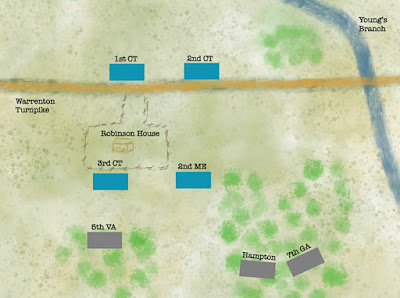 Confederates are Player One.

Fencing at Robinson House and the woods provide cover.

Visibility into the woods is 6”

Units that move more than once in a turn cannot fire in that turn.

When attempting to give orders to 1st and 2nd Connecticut, Keyes’ command rating suffers a -1 in addition to the penalties for any distance involved. Likewise Jackson suffers the same penalty when trying to order Hammond and 7th Georgia. This reflects the historical situation, which saw those units being kept out of the battle. 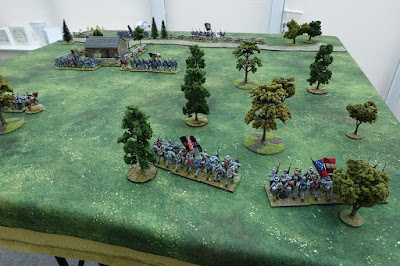 The table is set up as per the map, but there is no real need to represent the waterway on the table (I didn't). The 3rd Connecticut and 5th Virginia will start within smoothbore musket range of each other and would still be in range (maximum) if 3rd CT dropped back behind the fence. Keyes sets up 1” away from 2nd ME and Jackson sets up 1” away from 5th VA.

I used inches and measurements straight from the rules without any conversion. For the 3' x 2' game, I will halve measurements.

Units have standard stats except as follows;

All units are smoothbore armed, except that 2nd Maine have rifled muskets.

All units have stamina 2 except that 2nd Maine and 5th Virginia who are rated 3 (better).

1st, 2nd and 3rd Connecticut have hand-to-hand values reduced from 6 to 5.

5th Virginia are given the characteristics of ‘Tough fighters’ and ‘Pour it on boys’.

Keyes has a command rating of 7. Jackson has a command rating of 8.

Both side’s forces count as being a single Brigade. The brigade immediately breaks when two of its regiments are removed from play. The side not broken immediately wins the game.

The game played for longer than I thought it would, with musket fire traded back and forth, hoping for advantage and all the while with both sides trying to get their unengaged units into the action. The command penalty and the distance from the leaders meant that these took a while to get going and were tardy at best throughout the game.

The Brigade Commanders command range is stretched in this scenario and they generally need to stay at the heart of the action to help keep key units rallied.

The Confederates essentially stayed in the woods, while the Union were exposed in the open and despite the attempts of Keyes to keep his troops spirits up, it was the Union troops who took the greater casualties and disorder results.

Eventually, both 3rd Connecticut and 2nd Maine broke and left the field, forcing the rest of the brigade to break as well. 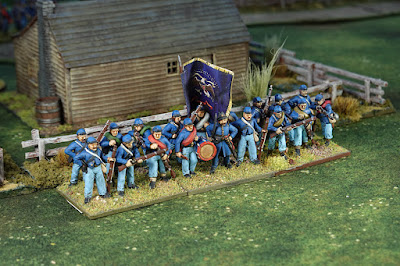 Having played once, I think the Union mistake was that 3rd Connecticut should have fallen back slightly to get cover from the fence at Robinson House, while their other regiments gathered to form a cohesive line.  Though if 5th VA had seen that happening, they may have been tempted to make a pre-emptive assault against the 3rd Connecticut position. 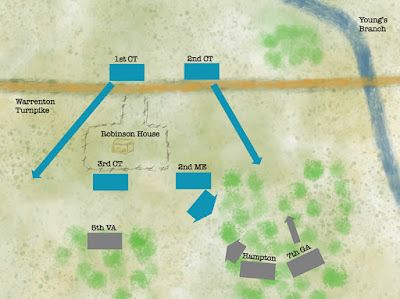 Having all the units rated as Stamina 2 except for two of them being 3 (better) added some local interest and together with VA’s other attributes, would have made them an interesting counter-attack force. Stamina 2 makes both sides nervous as to their ability to stay in the field, which probably reflects the subject quite well. 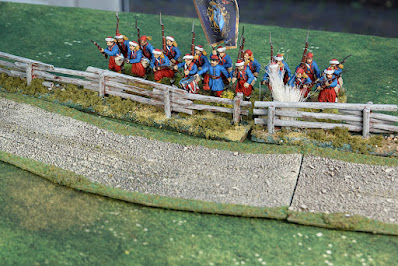 Overall, the game did feel like an early 1861 engagement and passed a pleasant hour. This would make a good midweek game. Now to try in on the 3’ x 2’ space with a smaller scale, I might drag the hexes out and try out a ‘Two Flags - One Nation’ bit of action with 12mm forces.

Resource Section.
A PDF copy of the scenario downloaded from Dropbox. You don’t have to have a dropbox account to download this document. LINK
https://www.dropbox.com/s/mbh3n8l3mzsnk25/Henry%20Hill.pdf?dl=0
Posted by Norm at 18:50