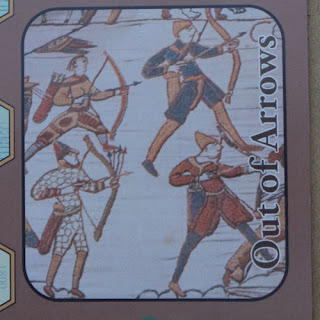 Today being the anniversary date of the Hastings 1066 battle, I have given Invasion: 1066 The Battle of Hastings a run out.

Who will hold the crown by the end of the day?

I designed this game back in 2000 and self published it as a Desk Top Published game, on a home computer, under the title Senlac Hill. It was an amateur effort and players had to glue the paper counters to card.

In 2015, Revolution Games took the game (and the sister design - Stamford Bridge - then called Orri's Storm) and professionally published it.

This year both games have gone out of print and I would like to thank Roger and Richard at Revolution Games for giving these titles a new life and to all those who have supported the games, in particular those who spent twice, by getting my DTP version and then later buying the Revolution Games version.

The Hastings battle was a tough, grinding affair that went on for hours. I have tried to have each player connect emotionally with the game by having the Normans feel like they are just banging their head against a wall as the ridge holds firm and they feel the battle slipping away from them, while having Harold's army slowly realising that their defences are collapsing and the need to hold out for just one more turn.

It is a game that opens up slowly and often things are only settled for certain in the last turn or two.

A main feature of the design is the morale system. As each sides take increasing casualties there becomes a greater chance that routs start to happen. Just here and there to start of with and then they escalate into more significant parts of the line collapsing.

Anyway, on with the game.

Opening turns. The Norman front line has archers and they shoot to disorder the Anglo-Saxon line. If they roll a 1 or 2, the archer unit is taken off the map for being out of arrows. By the end of turn 2, the archery phase has pretty much concluded and a couple of the enemy housecarls have become disordered.

They need to exchange positions with the weaker Fyrd behind them, so they can rally off their disorder (reorganise) in the rear lines and then return to the fight. Over the course of the game, increasing numbers of housecarls become absent due to do this or because of casualty loss and the Anglo-Saxon front line starts to fill out with the Fyrd.

Norman infantry assaults, concentrating on the disordered enemy units or any Fyrd caught in the front line, fail to make any impression, in fact two Norman infantry units are lost! one on either flank.

The Norman cavalry are unleashed. On the flanks, leaders, Fergant (left) and Eustace (right) lead the attacks (risky - but it is the way to break into that ridge). Eustace loses his cavalry unit, but he survives!

On a second wave of attacks, Fergant is killed, but his Breton force keep their nerve.

Both of Harold's wings are starting to give way.

By mid game, Harold's centre is defiantly keeping the Normans back, but the situation on his wings is worsening, despite sending extra units to help, though the Normans find it difficult to maximise their gains because so much of their own army is now disordered.

In fact, I can't remember a game where so much disorder has occurred, at one point I ran out of Norman disorder markers.

The first housecarl unit breaks, even Leofwine can't hold them back. He orders a counter-attack, which he personally leads. It goes badly wrong and he is killed, causing a local collapse of morale and part of his line routs.

William puts in a fresh attack in the centre and sends the Papal Banner forward to encourage the troops. It is yet another attack repulsed, but amongst the Norman losses, the Papal Banner falls to the ground and a quick footed Fyrd unit runs out, collects it and takes it back into their own line.

The end game. With his flanks in tatters, particularly the crushing defeat on his right, Harold feels that the only way to recover the situation is to make a counter-attack in the centre, which he leads (note - if either Harold or William are lost in the game, it is an instant automatic victory to the other side!).

All around William's position are disordered cavalry, trying to re-organise and it is here that Harold concentrates his attack. He fights his way right to Williams position, but is spectacularly unlucky .... twice! when William's troops pass their morale checks and against the odds, their centre holds instead of breaking.

It is the last turn of the game, so there are no second chances, darkness has fallen and it is clear from the map that William has won (which is why he did not expose himself to danger in the last turn), but we shall count up all the victory points anyway and see what we have.

The Normans don't gain any points for holding the Papal Banner as they lost it. Neither side cut deep enough into the enemy position to claim objective points to the enemy rear, so it is just down to casualties. The Anglo-Saxons have lost two leaders, the Normans one.

The points are totted up and the Normans get 80 points compared to Harold getting 43, so a substantial Norman Victory and that margin of difference is very wide for this game, often they can be within 10 points of each other, which is why the Normans must win by more than 10 points to get a victory.

For what is essentially a frontal assault, with little opportunity for manoeuvre, the game does give (at least to me) some excitement each time out, with lots of nuance going on down at the hex level. This time though, the Normans got an easier ride than they usually do and were breaking into the ridge position a few turns earlier than is often the case.

Of note - the Norman army can call a lull in the game. It consumes a whole turn, but it allows them to reorganise from disorder on favourable terms. Today the Normans didn't call for a Lull because it requires them to pull back a bit, which would lose their foothold on the ridge and of course the enemy also get to reorganise. The Norman's didn't want to lose momentum. Also, a lull brings all the archers back with a new arrow supply. It really needs to be used mid game if it is going to be used at all, so that the archers get a chance to open up a new stage in the battle.

I don’t call upon the lull rule very often, but here, as a consequence of not calling a lull, in the final couple of turns, they were carrying so much disorder, they were unable to respond to Harold's attack and he nearly succeeded in the closing moments of the game in doing quite a bit of harm to the Normans. If he had succeeded here and had an extra turn to press harder and rout the enemy centre, the day may have been his.

Anyway - thank you game and thank you Revolution Games.