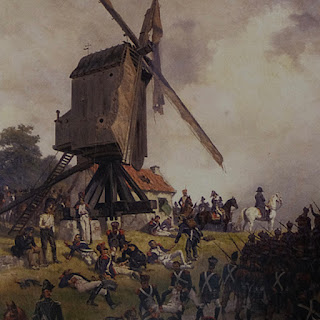 Scenario 1 from the ‘Last Eagles - The Battle of Ligny’ (by Hexasim) module goes onto the table. This is one of the two introductory scenarios in the package and covers the battle for St. Amand and La Haye.

The villages of St. Amand and La Haye sit on the right wing of the Prussian defence. Vandamme’s III Corps was tasked with taking control of these villages and to compel the Prussians to engage as much of their force as possible’.

This is a 4 turn scenario, commencing at 3 PM, with hourly turns, but each force gets to activate twice per hour.

The rest of this post covers this action, looking at turn 1 in some detail to pick up game nuances and then just gives an overview of the rest of the battle. Please use the ‘read more’ tab to continue.

This is my ‘go to’ Napoleonic boardgame system and I love the simple depth of this short introductory scenario, which has elements that make it engaging for both sides. 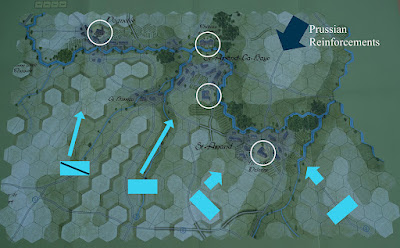 The French have arrived at the bottom of the map. Their task will be to attack the villages with a view to capturing the four hexes that are signified by being major buildings (I have circled them on the above map - click to enlarge).

This system uses orders. Vandamme will have to select a target hex (from a range of available choices) and this basically provides the focus for his force, compelling them to move in that direction. Units can act independently of the order, but there are penalties and those unit must test for independent movement. At the start of a turn, each side can change their orders, choosing a new location for focus.

Command range for Vandamme (French) and von Ziethen (Prussian) is 8 hexes, which gives fair coverage on this map with the overly large hexes.

Positions - The French start in the locations as described above. The far left group are cavalry and horse artillery. They are out of Vandamme’s command range, so will need to test for independent movement. The Prussians can spread their starting force amongst the four objective hexes (within 2 hexes of each major building). They put their strongest forces down at St. Amand to slow the French and give time for reinforcements to get into place. The French set-up first.

French - Move to the farm ( Ferme de Malonne) at St. Amand. This will allow for an assault against the whole village and the capture of the farm, which is one of the four objectives.

Prussian - They too have the farm as their focus. This will allow their initial reinforcements to move down and support the St. Amand position.

And so it begins!

3 PM - Vandamme launches an immediate infantry attack against St. Amand, not taking time to prepare for an opening artillery bombardment. From the centre right and right, he attacks the flanks of the hamlet, creating two melee situations. 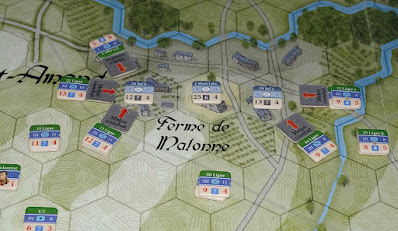 We will have a closer look at these two combats as shown in the photo above, just to examine the system a little closer. The French have moved adjacent and ‘declared’ melee attacks, marking which units are attacking.

In each attack, the attacker must declare a lead unit for each stack. One of these per attack will use its Quality Factor and compare it to the enemy Quality Factor for a die roll modifier. So the better troops tend to be used for this. In our case, in both attacks, it is the French light infantry units with their QF of 8 that will take the lead. Losses are always applied to lead units.

Before the melee is resolved, the defending unit gets a chance to fire. In both cases our defenders roll shockingly high (bad) and their fire has no effect.

We shall look more closely at the assault on the right. The French total strength is 29 combat factors against 13, giving a 2:1 attack. This ratio gives the attackers a -2 Die Roll Modifier (DRM), low is good. They also get a -1 for having the better Quality Factor rating for a total of -3. The defender can claim the cover of buildings, offering a +1 DRM, so at the end of all that, the total DRM will be -2 (still in the French favour).

2D6 are rolled, scoring 10 (bad for the attackers), reduced down to 8 due to the -2 DRM. Unfortunately for the French, this is a result that affects the attackers! They have to take a Quality Rating test. The 15th Léger stack pass. However, 64th Ligne fail and fail badly, suffering a rout result and they are immediately moved 3 hexes towards their supply hex and will remain under the rout marker, typically until they leave the map.

So overall, that attack went very badly. In contrast, the more powerful attack on the left was a success, forcing the Prussian 24th Infantry Regiment to suffer a loss (flip) and retreat a hex, falling back deeper into the village.

Of note is that in this system, out of command units or units that don’t want to move in accordance with current orders must attempt Independent Movement. They take a Quality Rating Test and if passed, they are free to use half movement. If they fail, they can only move 1 hex. The French left and centre left fail their rolls. So all-in-all, the French have not got off to the best start.

The Prussians now have some decisions to take. Do they stand, to hold the farm for as long as they can, or do they fall back into the village and cover the bridges. If they give up the farm, which is an objective, the French will start to get 2 victory points for it each turn, so a potential 8 points worth if it is lost now. That is too much. The Prussians will hold!

They do however choose to bring on their first group of reinforcements, which will immediately award the French 6 Victory Points! The reinforcement group is roughly a brigade sized formation (similar to a French Division) and consists of 3 infantry regiments, 2 cavalry regiments and a unit of Jägers. Current Prussian orders for the Corps have the Farm at St. Amand as their focus, so this reinforcement marches to the sound of guns!

3.30 PM (this is effectively the second round of activations in the hourly turn). The French make further inroads into St. Amand village, but the farm holds out, repulsing another attack. To the French centre left 11th Léger suffer loses from artillery firing from positions at le Hameau.

4 PM - With the fight at St. Amand reaching a critical point, both sides keep their orders with St. Amand as the focus.

Prussian 1st Westphälisches Landwehr continue to stubbornly defend the farm, though they are tiring and taking losses (flipped). The French are managing to infiltrate the village and 22nd Ligne have actually managed to cross the stream into the Prussian rear (see photo below). Two Prussian cavalry regiments, put in a swift counter attack against them, but they are repulsed by the 22nd, causing one cavalry unit to rout. 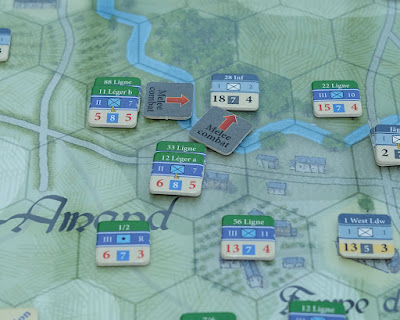 Above - 88th and 33rd Ligne with 11th and 12th Léger, attack across the stream, hitting 28th Infantry who are lining the woods. They are bloodily repulsed, with both units in the 11th Léger stack taking losses (flipped).

On the centre left, 4th Ligne, who had been advancing very slowly towards La-Haye have faced off against 7th Reitende Batterie and surviving the incoming artillery fire, they attack and put the unsupported Prussian artillery unit to flight. This allowed 4th Ligne to advance after combat and directly threaten the farm at La-Haye (another objective hex).

Overall, the Prussians down at St. Amand are coming under increasing pressure and taking losses, but the French are also getting worn and have not yet managed to secure their first objective (St. Amand), the clock is ticking.

5 PM - Orders, both sides change their orders, with the focus now being the hamlet of La-Haye. The French feel that they almost have St. Amand sewn up, so can start to move on La-Haye, while the Prussians will want to send new reinforcements there, as it looks like the battle will soon be switching attention to this hamlet.

As predicted, the farm at St. Amand fell after the French put in an overwhelming attack. 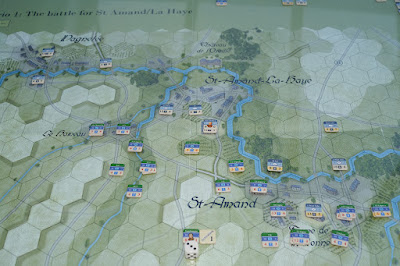 The Prussians decide to release another reinforcement group, instantly awarding the French another 6 victory points. This is an infantry brigade with artillery support and it immediately starts making for La Haye, hopefully arriving in time to greet the French assaults.

For their part, the French put in an early assault on La-Haye, hoping to make progress before Prussian reinforcements arrive, but it is a disaster. 70th Ligne break themselves on enemy guns, routing and carrying away a significant part of the line as three other units join in the rout!

At this critical point in the battle, the French look like they are running out of steam, while at the same time Prussian reinforcements are pouring into La-Haye.

6 PM - Orders. The French keep Le-Haye as their focus in the hope that in this final hour, they can take possession of the second farm. The Prussians choose to focus on the Chateau de l'Osaille (3rd objective), which sits just above La-Haye and will allow the Prussians to move freely towards it to keep it secure.

The French put in a fresh attack at the La-Haye hamlet, but are repulsed with two units, 12th and 56th Ligne, routing!

6.30 PM - despite things looking increasing tough for the French, they make a final assault against the La-Haye farm, but amazingly, the reduced Prussian defenders hold out and with that, the fighting across the villages dies down.

Without even counting points, this looks like a French loss. Their casualties were not particularly significant, but they had lost a total of 9 units to rout and this just left them too weak to prosecute a successful attack across their front. Time wise, they had been held up too long at St. Amand, so a good decision by the Prussians to hold there.

This was all rather confirmed by the French victory point count as follows;

Giving a total of 20 victory points which results in a Prussian victory.

All said, a very enjoyable game, with a result for the French that matches my old school reports .... must try harder!